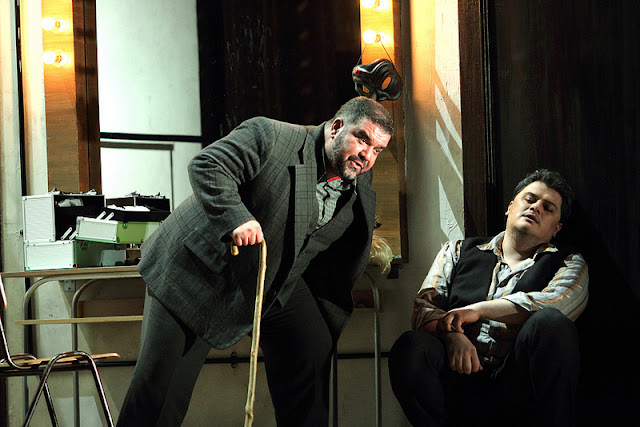 Cavalleria Rusticana and Pagliacci  at the Royal Opera House. This Cav & Pag is worth seeing, even if it's pricey, because, in its quiet thoughtful way, it reminds us what opera is really about.  "Io sono il Prologo" a figure (Tonio) intones. What we are about to experience is an artificial creation, designed by "L'autore". But "l'artista è un uom e che per gli uomini scrivere ei deve. Ed al vero ispiravasi" . It's not outward trappings that make an opera but the emotional truth in the human drama within.

Pietro Mascagni's Cavalleria Rusticana and Ruggero Leoncavallo's  Pagliacci work together well because both deal with extreme feelings in non-extreme circumstances. In these villages, people observe religious and social rituals. Their lives unfold as if determined by  a script, their "author" being convention. Yet the script collapses when they act on their feelings. It's not for nothing that both operas predicate on the idea of betrayal. Adultery upsets the institution of marriage, yet denying the feelings that lead up to it would be emotional self-betrayal. In Pagliacci, the "clowns" put on a show. But who are the clowns, the actors, their parts or the audience who come to be amused  and expect life to match their expectations?

Damiano Michieletto's production recreates an Italy of the recent past  but that's perfectly valid. Leoncavallo specified a period only some 20 years before the opera was written, and Mascagni merely refers to the century - his own.  Michieletto's approach thus underlines the humble, human side of the drama.  We see ordinary people in simple surroundings  going abou ttheir ordinary lives. It's also very loving, as if the "memories" the Prologo refers to are being recreated in the imagination. It's  more touching and intimate than, say, the recent Salzburg Cav &  Pag with its busy, self-conscious theatricality. Real lives are drama, too.

Hence the absence of fancy costumes.  Although Leoncavallo employs Commedia dell'arte figures, he knew that they are stereotypes, a kind of shorthand for universal personality traits.  Pierrot, the clown, is pale and wan, like his signifier the moon.  Yet what he represents is much deeper. He's a clown who weeps, an eternal outsider, never treated with respect. Anyone who really understand the symbolism will understand the reality behind the makeup and clown suit. Dimitri Platanias (who also sang the role in Salzburg)  is a stocky fellow but embodies the character so accurately that the real Fool is anyone who demands a fancy costume in order to understand. There were some in the audience who didn't get the basic premise in the opera and assumed it was the director's "fault" though it's clearly central to the composer's own conception of the opera.  Commedia dell'arte costumes would only confuse the issue further. The dignity and pathos of Platanias's singing was so effective that it communicated through the heart.

In Cavalleria Rusticana, Platanias sang Alfio, while Aleksandrs Antonenko sang Turiddu.  In Pagliacci, the roles are reversed, and Antonenko sings Canio, Alfio's mirror image. These intricate ironies further amplify the interplay between reality and illusion so central to this double bill. Antonenko  is a tenor but sang Turiddu with forceful but purposeful volume, expressing the character's macho swagger extremely well. At Salzburg, Jonas Kaufmann sang the role but I'm glad we had Antonenko instead, although he doesn't have JK's starry glamour, because Antonenko  is very good because he keeps the focus on the ensemble.

Eva-Maria Westbroek sang Santuzza in Cav while Carmen Giannattasio sang Nedda in Pag. A good pairing,  since careful balance is integral to this double bill, and very much part of its impact.  Westbroek's star arias were delivered with superb style. One wonders more than ever why Turiddu would cheat on her with Lola (Martina Belli)  a part so undefined in the score that we don't know all that much about her charms other than that she has a nice nightgown. Again, appearances don't count for much! Santuzza loses her man but gains a mum (Elena Zilio) in Mamma Lucia.  Thanks to Leoncavallo's greater sophistication as a composer, Nedda  gives Carmen Giannattasio plenty to work with, which she does well. She portrays the multiple facets of the role with skill, switching from the tortured soul that is the "real" Nedda to the coy, posturing Columbine and back, even expressing the twee asides so much part of travelling performance. Benjamin Hulett impressed greatly as Beppe. Again, he acted with his voice. He needed no harlequin suit to mask the portrayal.

Paolo Fantin's set contributed greatly to pace, balance and meaning. Swift transformations, "outer" and "inner" perspectives switching like the reversals in the plots. The staging within a staging in Pagliacci was particularly effective. The "theatre" took place in a converted school gym  as semi-amateur performances often do.  For a short time, the villagers become more than themselves, but particiapants in the fantasy that is theatre. For a moment, we see the chorus wearing masks  - another reminder that, in opera, what you put in is as important as what you expect to get.  In this case, however, the "audience" get more than they expected, as the play becomes "reality" and Canio stabs Nedda. Suddenly the play ends, but the spirit of the Prologue still hovers, like a ghost.

Costumes are costumes. they are not souls.