English Visionaries : A Vision of Aeroplanes 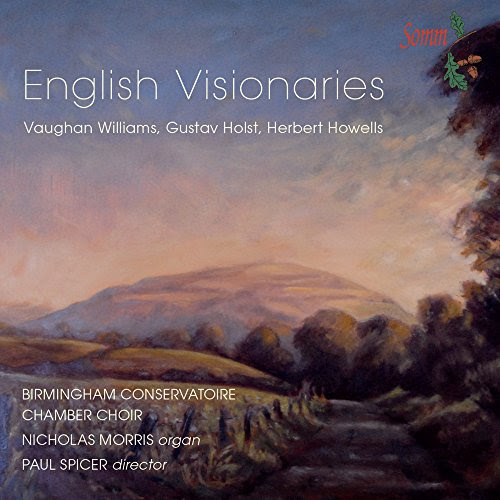 New from SOMM Records, English Visionaries, choral music by Vaughan Williams, Holst and Howells with Paul Spicer and the Birmingham Conservatoire Chamber Choir.  Why "English Visionaries"?  Composers who weren't religious, writing music which connects to a long-standing British fascination with the more eclectic aspects of belief. One thinks of Blake, the Transcendalists, Milton and John Bunyan, not rigidly orthodox, but spiritual.

"I looked, and behold a whirlwind came out of the north, a great cloud and a fire unfolding itself". Vaughan Williams A Vision of Aeroplanes (1956) sets the scene on the Book of Ezekiel where the Prophet sees a chariot materialize in the sky, propelled by four angelic creatures each with four wings, joined together, operating as a single entity.  Vaughan Williams added the word "aeroplane" himself but it captures the idea of levitation, of perpetual movement, noise, wheels within wheels, wings fanning wind and even lightning and metallic brightness.  Ezekiel thought this was a manifestation of the Divine. To Vaughan Williams and many in the post-war era, the image might be far more ambiguous.  The piece begins with an astonishing blast from the organ (Nicholas Morris), the voices intoning lines that waver up and down the scale, suggesting unearthly motion.  Other lines arch outward in ellipse.  A solo voice emerges from the turbulence (Victoria Adams) and gradually the music subsides, like the idling of an engine.  This new recording is particularly welcome since Spencer made his recording of this piece with the Finzi Singers twenty five years ago.

Vaughan Williams's Mass in G Minor (1922) harks back to an earlier period, not only in terms of the composer's development but also to the influence of Tudor form on modern British music.  The text, in English, is sung with bright focus lighting up the lovely chromatics, also a feature of Holst's The Evening Watch (1924) which adapts the Song of Simeon as an exchange between soloists, representing bodily life, and the choir, representing the soul and eternal life.  Holsts's Sing me the Men (1925) continues a sense of dialogue, but in a much more robust mode, reflecting  the solid Muscular Christianity of the text by Digby Mackworth-Dolben (1848-1867).  Men's voices alternate with women's. Particularly lovely abstract vocalise in the women's parts.

This new recording also includes a new performance of Howell's The House of the Mind (1954).  The low rumble of the organ suggests, not so much an organ in a church, but a more elusive hum: perhaps the inner hum of meditation ?  The text, by Joseph Beaumont (1616-1699),  refers not to grand cathedrals but to a house that is small "girt up a narrow wall, in a clean and sober mind", in which man might make a humble abode with God. Though the house may be cramped, Howells's soaring lines suggest limitless boundaries, soaring upwards, faith that "can mock all hostile power".  An inspired choice which flows beautifully into Vaughan Williams's Lord, Thous has been our refuge (1922) to a text by Isaac Watts (1674-1748) paraphrasing Psalm 90.  Echoes of plainchant and melodies from hymns anchor this piece in conventional Anglican tradition, as does the dialogue between trumpet and organ. On a recording, context makes a difference. As Lord, Thou hast been our Refuge drew to a close, I pondered the Vaughan Williams of the Mass in G minor and of the Vision of Aeroplanes, in his maturity.
at September 14, 2016