Art Song that became an icon : On the Songhua River 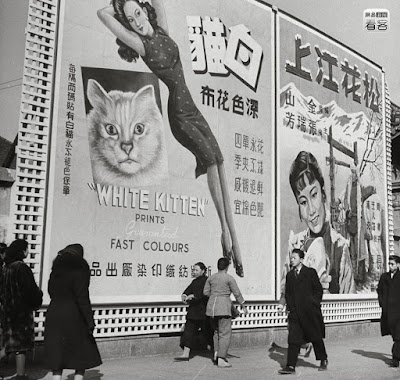 Billboards in North China in 1947 juxtaposing two realities: consumer fashion goods on one side, and an ad for the film On the Songhua River on the other.  Passers-by are rushing past. They don't know that Communism is just around the corner. The film On the Sungari River (the old westernized name for the Songhua) was made almost immediately after the Japanese surrender in North China, almost literally before the embers had finished burning on the battlefield, which gives the film a poignant authenticity few movies attain. It is certainly not to be dismissed as mere propaganda.  Real people lived in real times like this. We must not forget.

A young girl called Niu-er lives in a village, lovingly depicted by the camera. Suddenly strangers appear: soldiers on horses, brutalizing peasants into submission. It is September 1931, and the Japanese have invaded. Fourteen years of war will follow, tens of millions will become refugees, China will never be the same again. Niu-er's parents are murdered (the killing of the mother particularly distressing). The girl and grandfather flee, but soon grandfather dies, entrusting Niu-Er to a lad from their native area, "You're going to have to marry one day", says the old man "so make the most of it". Eventually Niu-er's husband finds work in Japanese-operated coal mines, under notorious conditions of slavery. This mineral wealth was why the Japanese invaded North China. The area is still the powerhouse of modern China's industrial economy.  There's an accident, many miners are buried underground.  Posters appear, inciting rebellion, but many of the peasant workers are illiterate. The guards break up the demonstration but the workers fight back, though they're helpless against guns.  Some of the miners, including Niu-er and her husband, escape into the snow, to be rescued by partisans. In the final scene, the partisan band walks along the Songhua River, no longer frozen but carrying floes of ice swiftly out to sea.

The film is based on an even more famous song "Along the Songhua River" (松花江上) an art song by composer Zhang Hanhui, (1902-46) Biography in film here, which immediately became a smash hit, immortalized now as a patriotic song, heard in many manifestations, and still extremely popular today. How many art songs enjoy that success? The song of course isn't political, as it expresses emotions felt by Chinese on all sides of the political divide, Nationalist and Communist. It pops up in many forms, including the movie Cold Nights starring Ng Chor Fan and Pak Yin (Read more here)

Hence the chorus "918, 918" a date engraved on the consciousness of many generations, being the start of the 1931-45 war.  Below two contrasting versions: