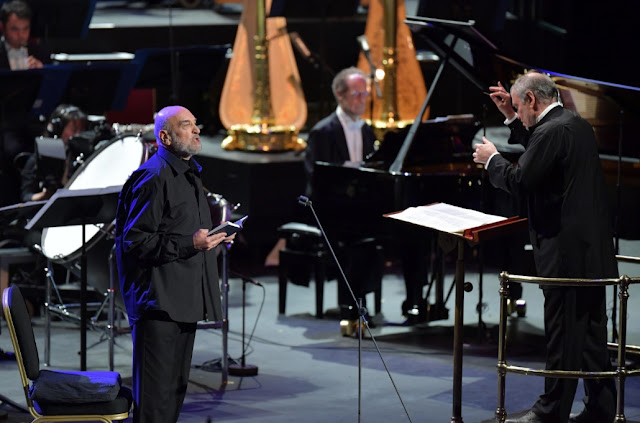 At the Musikfest Berlin, Valery Gergiev conducted the Münchner Philharmoniker in Galina Ustvolskaya's Symphony no 3 "Jesus Messaih, save us!" with Shostakovich Symphony no 4. A musically astute programme, much wiser that the odd ragbag Gergiev and the Müncheners had to do at thr Proms in July where Ustvolskaya's remarkable piece was buried in crowd-pleasing Strauss and Rachmaninoff.   Ustvolskaya's piece is powerful but forbidding and really  needs to be heard in proper context, not submerged in the ragbag mix the Proms inflicted on Gergiev. In Berlin, he could give Ustvolskya the prominence her music deserves, and present it in proper context. Ustvolskaya (1919-2006) was an outsider, her career so restrained that, in comparison, Shostakovich was almost a matinee idol. But as this symphony shows, isolation intensified her originality.  The power of this work lies in its emotional honesty,  built on the foundations of unshakeable faith.

Ustvolskaya's Symphony no 3 Jesus Messiah, save us!  is based on the life of an 11th-century monk, Hermann of Reichenau, aka "Hermann the cripple" who was born with so many birth defects that he lived in constant pain and had difficulty speaking. Nonetheless, he became a theologian, an astronomer, a mathematician and wrote a treatise on the science of music. He lived to age 44, ancient by the standards of the time and was canonized in 1863. A paralyzed musician without a voice? What a metaphor for a composer in the Soviet era!

Not for nothing, Ustvolskaya's Symphony no 3 evolves from a single, unaccompanied voice.  Alexei Petrenko (pictured with Gergiev at the Proms performance) intones the text with uncompromising gravity, as if his voice has materialized from an ancient past.  Thus the austerity of the orchestration, and the utterly uncompromising nature of the work, closer to Orthodox traditions than to medieval Europe.  The instruments operate in tight units: five basses, five trumpets, five oboes, three tubas, three percussion desks, with large timpani and smaller, militaristic drums.  Thus a sense of ritual, a sense of unshakeable austerity, pitting the solo voice against small but strong forces. The piano mediates, sometimes supporting the idea of a wayward individual, yet also employed as percussion, with  long drawn sequences of ostinato, a lone trombone wailing balefully long lines against the piano's firm "footsteps".  "Save us, save us" Petrenko whispers, (in Russian) his eyes raised upwards, as if listening for a sign, as the music quickly dissipates into silence. Whether or not Shostakovich compromised with the Stalinist regime, he managed to balance on the edge. Ustvolskaya wasn't sent to Siberia, but seems to have struggled on in a kind of external exile. Shostakoviuch dominates to such an extent that it masks the originality of Ustvolskaya's idiom. She and Shostakovich didn't get on for various reasons. In any case, the integrity in her music comes from very deep sources. Thus she's closer to Stravinsky and the "primitivism" of the Rite of Spring,  and to the brief explosion of modernity which flourished in the early years after the Revolution, and produced works like Alexander Mosolov's The Iron Foundry (1925-6)   Ustvolskaya's music even connects  to the fierce awkwardness of Janáček's Glagolitic Mass, and indeed to Messiaen's ground-breaking masterpieces like Et exspecto resurrectionem mortuorum. Boulez was a great interpreter of Stravinsky, Janáček and Messiaen, so his disdain for Shostakovich needs to be appreciated in context.  Maybe one day, when modern music is better understood, we can see things from a wider perspective.  Follow this link HERE to a discussion of  Ustvolskaya, her place in Soviet music and her relation to Shostakovich.  Also, this excellent documentary, made when Ustvolskya was, at last, being valued for her own sake. She was nearly 90 when the film was made but her mind is sharp. She knows who Reinbert de Leeuw is and what he stands for.

With Gergiev's championship of Ustvolskaya, perhaps now her time has come.  She was famously sniffy about some Soviet-era performances of her work, and with good reason, from what I've heard,  but Gergiev is sophisticated enough to get it.  Even though Gergiev turned up nearly 20 minutes late, not at all long by his track record, as soon as he reached the stage he snapped into form.  Extremely tightly focussed, a performance informed by the same kind of mental and emotional discipline Ustvolskaya insisted upon. This Berlin performance was so much stronger that the London performance seemed sloppy in comparison. Catch it on The Digital Concert Hall when it's rebroadcast in a few days.  Gergiev is unpredictable. When he's bad, he's very bad but when he's good, he's very good. The skill of a listener is to recognize which is which.

Gergiev has been conducting Shostakovich forever, hardly surprising, since the composer, who once had to compromise with the Soviets, is now thoroughly mainstream.  So this Shostakovich Symphony no 4 was rewarding, since Gergiev knows it like the back of his hand.  The interest, this time round, was his relationship with the Münchner Philharmoniker,  whose Chief Conductor he's become. The Munich Philharmonc is quite different from the London Symphony Orchestra, which Gergiev headed for ten years.  So far, so good.  I like the sound. Though Gergiev will conduct regularly in Munich, he'll still be based in London, where airline connections are better than in Munich, so he can commute between his various bases in oligarch enclaves all over the world.

Thank you for the wonderful service you selflessly give to music lovers.

I have never written to thank you before so it seems churlish of me to write you to point out a mistake you seem to have made. I believe the picture of the woman at the piano is a picture of Sofia Gubaidulina not of Ustvolskaya.
Please be assured that I point this out in the full knowledge that you yourself would not like a mistake to be left uncorrected on your otherwise invaluable blog.

I look forward to reading your future writings and to having my musical horizons widened even further.

Many, many thanks guydetrop ! Now you can see why I had the photos mixed up. Thanks again, I do all this on my own, so it's nice to have people who help.