When this concert of Walter Braunfels Songs was first broadcast on Deutschlandradio Kultur in 2011, it broke new ground. Eric Schneider is the pianist, with Marlis Petersen and Konrad Jarnot the singers.  Many thanks to Capriccio for making this available on CD, for this disc fills a significant niche in the discography.  For my review of Braynfels Or chestral Soings on Oehms (highly recommended) with Volle, Vogt and the Weimar Sraarskapelle please see HERE

Marlis Petersen possesses a voice that can handle the high, bright tessitura Braunfels was so fond of, and Konrad Jarnot is both blessed and cursed by the way his voice resembles Dietrich Fischer-Dieskau's. Eric Schneider is an exemplary Lieder pianist. This disc is a must for anyone interested in Braunfels or indeed interested at all in the development of Lieder during the first part of the 20th century.  What lets it down, though, is the lack of context.  While Braunfels is hardly unknown, he is misunderstood.

If Capriccio really wants to bring Braunfels to wider audiences, they need to provide enough background for listeners to appreciate why Braunfels and his songs for voice and piano are worth listening to.  The lack of translations to texts isn't a major issue, since most people interested in Braunfels and in Lieder are reasonably fluent in German. Capriccio is a budget label so we can't really expect much in the way of notes, but generalities, even if well meant, don't amount to much.  Informative notes do make a difference. If recording companies cared about what they do, they'd realize that properly researched notes are part of the marketing process.  The more buyers get from a CD, the more likely they'll buy more. Listeners shouldn't have to do all their own background work, especially in repertoire that needs cultural context. 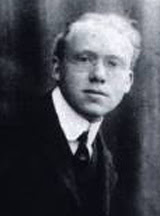 On this disc, there are eight sets of songs, organized by opus numbers, and 41 separate tracks. Quite a lot to take on board. However, they're more or less arranged chronologically, starting with Braunfels's Op 1 Lieder (1901). Braunfels was 19 when he wrote these songs, so don't expect much in the way of genius. But they do shed insight on the literary and artistic impulses that would shape the composer's whole outlook. These texts come from the George-Kreis, the fanatical and secretive sect around Stefan George. George obsessed about the German past, as if it were a sacred mission against the modern world.  Imagine the Grail Community on uppers. Beneath the romance, however, lay extremism.  Although George attracted good minds, like the Stauffenbergs and the teenage Hugo von Hofmannsthal, he also galvanized minds like Heinrich Himmler.  Although George didn't actually align with the Nazis - he died in 1933 - he was antisemitic, which makes one wonder why some of his followers, like Karl Wolfskehl, and Walter Wenghöfer, whose poems are set here, were Jewish. A curious toxic mix, but one that might have taught Braunfels to be wary of narcissism,  totalitarian values and the abuse of medievalist hogwash.  From Braunfels op 1 to Der Traum ein Leben and Heilige Johanna.

Thus to Braunfels's Fragmente eines Federspiele op 7 (1904), Fragjments from a feather game, meaning a concoction of lightness and charm, like playing with feathers.  Here Braunfels's thing for writing tricky high tessitura, the voice of a Nightingale, which means so much in Die Vögel. Each of these songs describes a bird - bullfinch, swallow, siskin, even a hoopoe - songs of chirpy litheness, effeverscence and spontaneity: the freedom of birds in nature.  If there are antecedents, they might lie in Hugo Wolf, but to me they are characteristic of Braunfel's whimsical humour, and like very little else written in this period.  But like Braunfels's Mozart Variations  and, indeed, the Magic Flute aspects of  Die Vögel, this disc includes a second set of Federspiele, nine songs, including goldfinch, turtledove and lark.  Braunfels's Federspiele are airy, but he's no airhead.

Braunfels's op 4, Sechs Gesänge (1905) are settings of poems by Hölderlin, Hebbel, Hessel and Goethe, finished off with sturdy ballads from Clemens and Brentano's Des Knaben Wunderhorn, all rather more typical art songs  of the period in which they were written and rather well crafted for a composer still in his early 20's.   Much more strikingly original are Braunfels's settings of Shakespeare, Musik zu Shakespeares Komödie Was Ihr wollt op 11 (1908).   A long piano introduction sets the scene for  text, spoken in English ; "If music be the food of love, play on....." This is followed by three Leid des Narren, each song charming, yet also funny, for fools and knaves are not so far apart, as the witty low figures on the piano suggest.

Two of Goethe's Egmont poems,  Klärchen's songs,  Freudvoll, leidvoll and Die Trommel gerüret follow. Both were set by Beethoven: Braunfels's versions, form 1916, are his own. Braunfels's Nachklänge Beethovenscher Musik op 13 provide thoughtful contrast.  A version of An die Parzen op27/1 follows, but is not a patch on Braunfels's full orchestration on the Oehms Classics disc of Braunfels Orchestral Songs which I reviewed HERE. partly because the textures are finer, but also because Jarnot is no match for Michael Volle  Then, fast forward from 1916 to 1932, and two of Braunfels's last songs of the Weimar period, the Zwei Lieder von Hans Carossa op 44/1 and /2.  Marlis Petersen's soaring timbre brings out the starlight  magic and moonlight in these refined miniatures: birdsongs and feather games, in darkening times.