The ghosts of history hung palpably above Prom 72 at the Royal Albert Hall, London.  Christian Thielemann and the Staatskapelle Dresden presented a programme that began with Beethoven Violin Concerto in D major with Nikolaj Znaider, and concluded with an even more intriguing pairing:  Max Reger's Variations and Fugue on a theme by Mozart (Op 132, 1914) and Richard Strauss Till Eulenspiegels lustige Streiche Op 28 (1895).  This combination tells us much more about Thielemann and the musical credentials of the Staatskapelle Dresden than yet another predictable rehash of the Mozart/Bruckner  mini series which has so fixated the media this week.  The Staatskapelle Dresden was founded in 1548, a bit earlier than the Berlin Staatskapelle (1570), and the Leipzig Gewandhausorchester (1748) . A very special perspective.

Yet again, Reger's Mozart Variations are not rare even if the BBC doesn't seem to know. Reger doesn't need to be discovered - British audiences just need to think in wider European terms.  Fritz Busch, who  conducted the Staatskapelle from 1922 to 1933, made the first recordings of Reger's Mozart Variations in 1920, when it was "new music" and again in 1944, 1949 and 1951, though not with Dresden orchestras.  Karl Böhm, who succeeded Busch, recorded the Mozart Variations with the Staatskapelle Dresden in 1938, and later with the Berlin Philharmonic.  More recently, Jörg-Peter Weigle recorded it with the Dresden Philharmonic, not quite as ancient or as illustrious as the Staatskapelle.  Keilberth, too, who recorded Reger in Bamberg,was also a chief of the Staaatskapelle.

Thus Thielemann connects to a long-standing association between Dresden and Reger. But a tradition revived afresh and reinvigorated.  The opening theme in Reger's Mozart Variations derives from Mozart's Piano Sonata No 11, which itself incorporates variations on a basic concept. Thus Thielemann and the Dresdeners presented it with lucid elegance, emphasizing the intricate proliferation of variation upon variation.  Reger writes with the elaboration favoured by very late 19th century composers, but it's a mistake to assume the piece is Hollywood-style treacle. It's based on Mozart, afetr all ! Romanticism was not "romantic"  and in any case Reger was writing in an era informed by the exoticism of Jugendstil.  Thielemann thus demonstrates  how the textures can shine when sharply defined, so the colours glow as if from the music itself, as they should.  Reger may not be as original as Korngold, Schreker and Zemlinsky, but like them, he was heading forwards, not back.  As Thielemann and the Dresdeners played, I thought of Dresden itself, and the Zwinger, an exquisite roccoco gem which seems to epitomize the ideals of civilized balance.

Unfortunately we know how quickly ideals can be destroyed by mindless mass hysteria.  Thielemann has been excoriated for having said "Wir müssen auf die Fragen hören" when Pergida raised its ugly head in Dresden. That was back in early 2015. Now that populist extremism is proliferating all over the world, to confront it we need to learn.  Mob think thrives on non-knowledge, so it's worth checking at source.  Read in Die Zeit what Thielemann actually said, Text HERE. The "Refugees Welcome" movement now gathering pace also had its origins in Dresden. 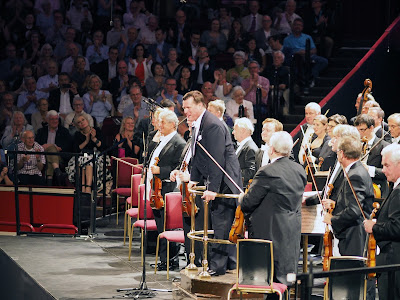 The Staatskapelle, in its home at the Semperoper, has also been closely connected with the development of German opera. Richard Wagner started out at what was then the Hofoper. Richard Strauss is even more closely associated with Dresden. Nine Strauss operas premiered here, including Der Rosenkavalier (Vienna only later).  The Alpine Symphony, though premiered in Berlin, was performed there by the Dresden Hofkapelle, to whom it was dedicated.  Including Till Eulenspiegels lustige Streiche  at this Prom proved a point, quietly. Till Eulenspeigel is a cheeky prankster, and the Dresdeners performed it with charm.  Typical Richard Strauss irreverent humour.  For Till is dangerous. He overturns conventional order and gets hanged.  Thielemann and the Dresdeners know Strauss well enough to realize why the clarinet supersedes the horn. The horn is , well, Wunderhornish, representing folk tradition, while the clarinet's exaggerated howls parody the idea of funeral march. We might laugh, but underneath Strauss's merry jokes lurk darker ironies.  A genuinely idiomatic performance, done with a stylishly nonchalant air, true to the soul of Richard Strauss.

This Prom began with Beethoven's Violin Concerto in D major with Nikolaj Znaider, which the Dresden Staatskapelle is featuring this season. A performance which I enjoyed well enough, and which was received with rapturous applause by the Royal Albert Hall audience.   .