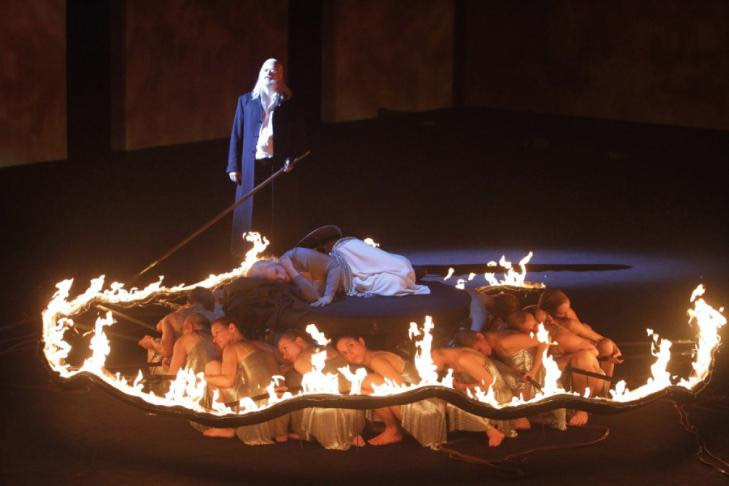 In Munich, the Bayerische Staatsoper struck gold with its current  revival of the Ring, with an astonishingly good cast in this Die Walküre - Nina Stemme, Anja Kampe, Ekaterina Gubanova, Simon O'Neill, Ain Anger and John Lundgren, and Kirill Petrenko conducting with more intensity than ever before.  A good cast of Valkyries, too, some of them significant names in their own right - Daniela Köhler, Karen Foster, Anna Gabler, Michaela Selinger, Helena Zubanovich, Jennifer Johnston, Okka von Damerau and Rachael Wilson.  Wonderful singing, and playing, so delicious that you savour every moment.   The unique character of O'Neill's voice expresses Siegmund’s tortured soul with psychological insight - extraordinarily moving. Kampe (O’Neill’s other half)  interacted well with him, the pair clearly "twins" with old souls, in contrast Anger’s virile Hunding. Anger sings gloriously, and sounds fresh and full of vigour. But we know what is about to happen. Stemme is a striking Walküre Brünnhilde. The part is very different to Brünnhilde in Siegfried and in Götterdämmerung, so relies on more subtlety, which is Stemme's forte. Lundren is a powerful Wotan.  In the saga of the Ring, he, too, eventually gets sidelined and morally upstaged by his daughter, but for now, like Anger’s Hunding, he's very much a potent force , which makes the interpretation tragic.  Musically, this  Die Walküre is ace, but anyone can write about that, so I'll write about the interrelationship between music and ideas.

This Munich Die Walküre proved the value of the production by Andreas Kriegenburg.  An uncluttered, unfussy staging throws focus on the drama, extending the depth of the music, connecting what we see to what we hear.  Staging is a lot more than mere decorative effect.  Dramaturgy connects drama to its wider cultural context. In Wagner's time, that context was taken for granted.  Unfortunately these days some audiences expect opera to be as non-demanding as TV — which is a travesty. Wagner without intellect isn't Wagner.  Superb dramaturgy, by Marion Tiedke and Miron Hakenbeck which addressed Wagner's ideas on society and human interaction.

Siegmund battles through a storm.  The storm is psychic, not just physical : effectively he's been battling turbulent forces since childhood, forces beyond the realm of Nature.   Here we see the "storm" in human terms - anonymous warriors pushing Siegmund to and fro until he breaks free.  Hunding's home seems a haven, yet the World Ash Tree grows in its midst. No building can stand long when a tree this size takes root, nurtured from sources deep in the earth.  The tree doesn't sing but its presence dominates the drama. So what does it symbolize ?   Hunding is a bully who controls the people around him.  In these designs, by Harald B. Thor,  the World Ash Tree resembles the Hanging Tree (1633) by Jacques Callot,  that famous symbol of war and mass destruction.  As we look closely, we can see the bodies of warriors hanging from its branches.

Who is Hunding ? Is he a small time, small, scale Wotan ?  Sieglinde  (Anja Kampe) stands out from her anonymous handmaidens, but who are they ? Later, we see the Valkyries, identical and conformist.  On the battlefield, scattered with bodies of dead warriors, an orgiastic dance suggests primeval  ritual.  Quite a lot of good ensemble movement in this production, choreographed by Zenta Haerter.  The Valkyries' horses are invisible, like the supernatural forces of the storm.  Although they pull the reins, the Valkyries are not free.  When Wotan encases Brünnhilde in a ring of fire, the Valkyries are glimpsed crouched in submission, in the flames.

This creates a tension which reflects the tension throughout the Ring between rulers and the ruled, individuals and groups, and to Wagner's socio-political dynamic of power and powerlessness. .  Alberich is an arch-capitalist browbeating the Nibelungs, but so is Wotan.  Here we see his underlings hold papers on their backs for him to sign. Most bosses use desks. Wotan's desk is empty, which perhaps means something. For all his importance, Wotan's a shabby dealer who has cheated on his builders just as he cheats on his  wife, Fricka (Ekatarina Gubanova).  In the end, Brünnhilde restores to the Rhinemaidens the gold they lost because they didn't look after it properly.   But along the way, a lot of people (and gods) get sacrificed.  "Kinder, macht Neues!" in every sense. At a pinch, you could transpose Wotan and Alberich to Wagner, the flawed creator, and Cosima the obsessive non-creator. The magic of Wagner's Ring is that you can't separate music drama from conceptual,ideas, nor from life outside, in the world.