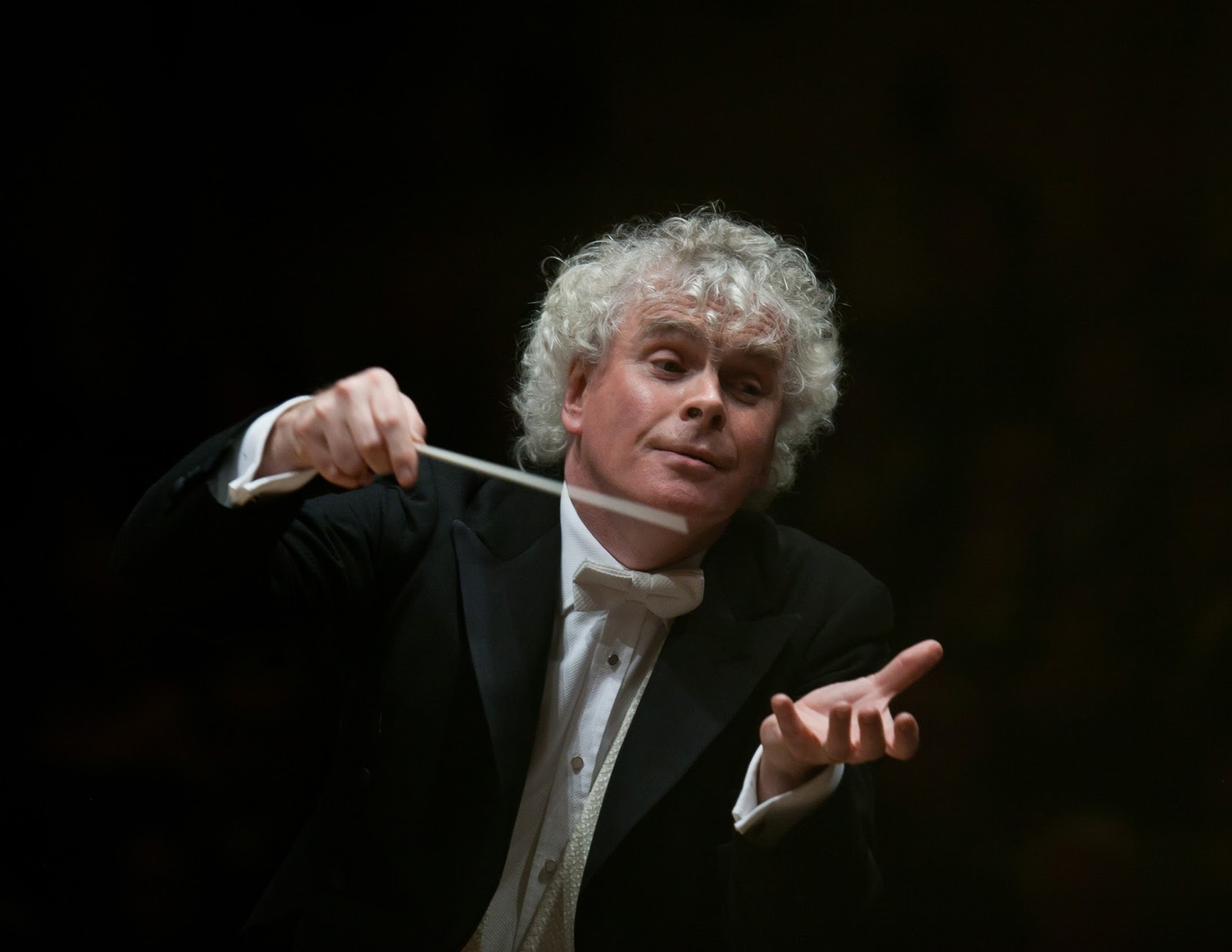 One of Simon Rattle's great strengths is creating musically-intelligent programmes. This latest, with the London Symphony Orchestra at the Barbican, brought together the final works of four 20th Century Masters - Janáček, Carter, Berg and Bartók.  A few years ago, he conducted Schoenberg's Op 16, Webern's Op 6 and Berg's Op 6 together, showing the connection between Mahler and the Second Viennese School (horrible misleading term).  Rattle's programmes are more than the sum of their parts: they make you think.  They also de-mystify modern music  which is important. Every era was/is modern in its own time, and 20th century music has been around longer than almost anyone alive.  Music is constantly evolving and won't suddenly fossilize.

Sadly, there still are folks who believe that suddenly, overnight, Schoenberg imposed dodecaphony on the world. Such folk often think that Berg's Violin Concerto is a throwback to some ill-defined notion of "romantic" music.  That's musically illiterate nonsense on so many levels that it's shameful. Violins have an uncanny capacity to pull on the heart strings and the piece is very deeply felt.  But it's still modern. Listeners who can't get past the "Memory of an Angel" starting point aren't paying attention.  Berg was in the midst of writing Lulu, and was even personally more loyal to Schoenberg than most. The angel in question was Manon Gropius, whose family were very much in the centre of what was modern and up to date. And, like so much else in Berg, there are cryptic hidden messages, with darker, non-angelic subtexts.  Isabelle Faust has played Berg's Violin Concerto so many times that it's almost her signature piece.  Her approach is dignified, with the depth that comes with emotional maturity.  Genuine, sincere feeling, not the cheap sentimentality that sometimes surrounds reception.  Faust's playing has gravity, its poise informed by restraint, creating a tension which gets far closer to the soul of the piece.  The timbres are occluded, as if in shadow, textures disintegrating gently, as reality fades to memory. Tonality hovers on the point of breaking and then dissolves, when no more can be said.  The quote "Es ist genug", is a reference to Bach. No more can be said.  Berg, even at his most passionate, uses structure with the clarity of a mathematical mind. Puzzles and patterns are integral.  Faust's playing is extraordinarily beautiful because she understands the possibilities of expression that come by extending the borders of form.

Rattle prepared us for the modernity of Berg's Violin Concerto by prefacing it with the Overture from  Janáček's From the House of the Dead and Elliott Carter's Instances.  Carter's Instances was completed in 2012, premiered in Britain by Oliver Knussen. It was Carter's last work, written at the age of 103, ad probably wins the prize for "world's oldest composer composition". But how lively it is, and how inventive. Carter's "Late, late style", as he called it is freewheeling. At his age, he said, he didn't need to prove anything to anyone. For pragmatic reasons his late works are short and epigrammatic but no less inventive for that. In Instances, one can almost hear Carter grinning.

Janáček's music, with its angular rhythms and quirky discords doesn't fit  into neat little music history stereotypes. Janáček probably didn't know, or care, what was happening in France, Germany and Austria , but like his contemporaries in the 1920's,  he was forging his own original and distinctive path.  When Boulez began conducting Janáček some years back, there were howls of rage from some quarters. But Boulez loved the music for its own sake and he had, in fact, been studying Janáček since the early 1970's.   Rattle forged his own career in modern music, bringing Szymanowski, for example, to public attention long before most anyone else.  Szymanowski might seem "romantic" to some, but his intense chromaticism connects to Debussy and to Bartók.

And so Rattle and the LSO concluded with Bartók's Concerto for Orchestra.  In 1940, Bartók was in a new land, where he hadn't settled  and became despondent.  Once he began writing, though, his mood lifted as if rejuvenated.  Although there are familiar "Hungarian" themes in the piece, it is not fundamentally nostalgic.  Bartók was looking back on his past, well aware of what was happening in the Europe he'd left behind, and of the right wing extremism in Hungary, whose government aligned itself with Hitler.  Rattle brought out the granite-like inner strength in the piece and the firm lines beneath the nostalgia. Perhaps Bartók was drawing on sources in his psyche that went much deeper than folkloric colour. The ethereal opening theme developed until it emerged with expansive confidence. The music seemed to oscillate, highlighting the more disturbing undercurrents in the work.  Rattle negotiated the constant flux in the work, tempi spiriting along as if propelled by winds of change.

Why do you include Carter in the list of masters?

He remains one of those incredibly overhyped composers whose inspiration comes (if at all) only in the tiniest spurts. For to produce finely etched music demands a great ear, a large heart, a rich and deep personality, and an unerring sense of drama and pacing. Carter just didn’t have it to give, or he thought he was on to something better, but wasn’t…. His deluded music of the eternal present will sadly have little future.

That's what you might think, but it doesn't mean that everyone else is forced to think like you do. The whole point of this programme is that there are many different ways of being modern. The idea that there is only one way of making music is nonsense. Whether you like something or not, the sad fact isn that not everyone has to think the way you do