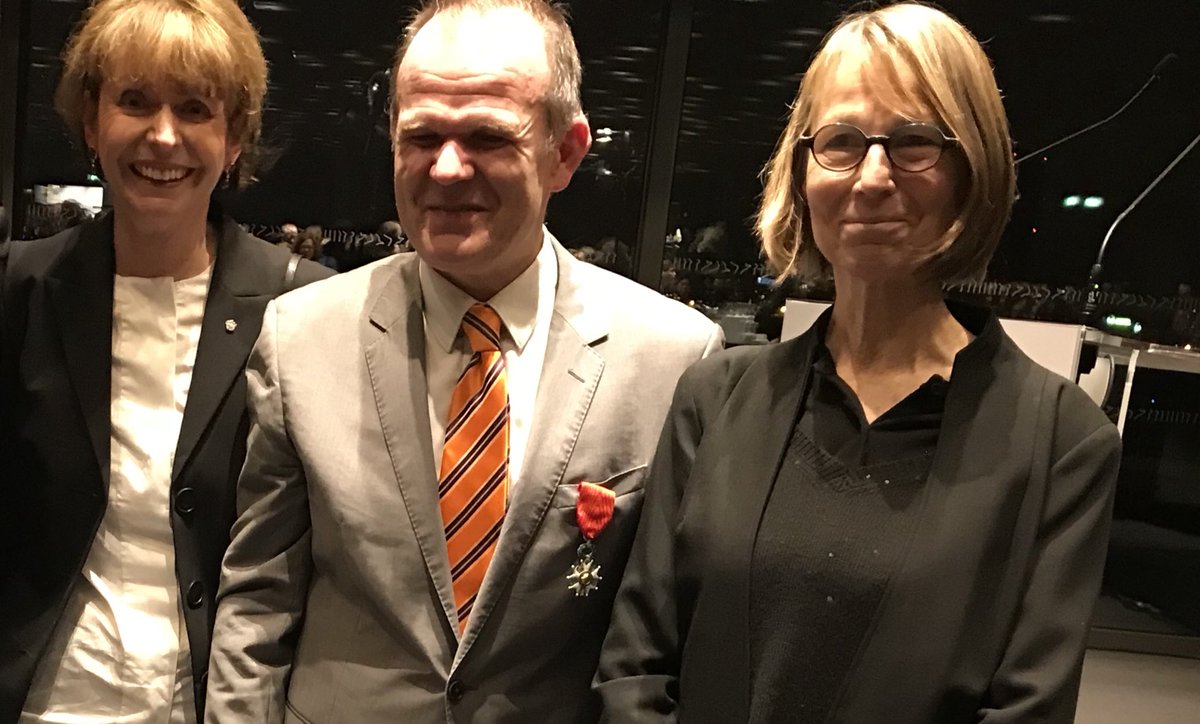 François-Xavier Roth was today awarded the Legion d'Honneur for his services to culture. Congratulations, and well deserved cheers !  Yesterday afternoon, he conducted another brilliantly eclectic programme with Les Siècles, at the Philharmonie de Paris screened live,  bringing out the connections between Javanese gamelan, Debussy and Pierre Boulez.  Unusual, but extremely rewarding, so please  make time to listen (archived on arte.tv and also on the Philharmonie de Paris website) because this concert has been put together with insight and great musical understanding. The roots of modern music lie deep in the past, and in forms beyond the western European core.

The photo at right shows some of the Javanese dancers who appeared at the Exposition Universelle of 1889, a world's fair celebrating modern progress.  Europe was looking outwards, inspired by exotic, alien cultures.. A "new" baroque age, in many ways, full of confidence and adventure.  France,  Belgium and the Netherlands had colonies in Asia and Africa,  and while they weren't any better as rulers than some, they were genuinely fascinated by the diversity and richness of the cultures they encountered.  Debussy visited the Indonesian pavilion, which featured large replica village, so authentic that the buildings were constructed by genuine Javanese builders, using materials they brought with them. For entertainment, there was a large gamelan orchestra, and troupes of dancers, not only Javanese but Balinese and Sumatran.  Debussy responded to their music as a musician would, not for the exoticism so much as for the ideas on pitch, intervals and structure.

And so this concert at the Philharmonie began with the Ensemble de Gamelan Sekar-Wangi, sounds building up so gradually that some in the audience didn't realize the show had started.  Unlike western music, a lot of Asian music is ambient sound, part of ordinary life, so you listen in different ways.  This performance included two singers, their lines weaving semi independently of the orchestral line, creating multiple layers of sound.  Gamelan performance is intuitive and semi-improvised, the performers adapting to one another.  The music moves as if in procession, the different components, co-operating, changes marked by gradual, mutually agreed changes of direction. Think ricefields, terraced up sloping hills, teeming with water, bugs and fish, harvested and re-irrigated. a lot of Asian music has spiritual and ritual connections, so this awareness of space does matter.
Eventually, like Debussy, Messiaen and Benjamin Britten would respond to Asian music in their own terms.  One day I hope Roth will conduct Britten's Prince of the Pagodas.  That's a piece that really cries out for someone who understands how the music works, and why.  Please read my analysis of it HERE.  In 1950's Britain,  it was misunderstood, not helped by awkward choreography.  Some years ago there was a much better Japanese production, but its full potential has yet to be tapped.  Go for it, François-Xavier Roth and Les Siècles, and use modern dance.  The time for a really good Prince of the Pagodas has come !
With the last echoes of the gamelan began Boulez Rituel in memoriam Bruno Maderna, the artillery of orchestral gongs taking up from the gongs of the gamelan and the beaten metal bonang.  Boulez writes for  eight unequal instrumental groups, moving at different paces and in rhythms,  just as mourners follow a cortege, seemingly disparate but with common purpose. In the Philharmonie, the differences are emphasized by having the groups playing in different positions around the main stage.  Wooden, beaten percussion - shades of the gamelan xylophone - functions like a heartbeat, often harshly hollow.  Sudden  interruptions, flurries, changes and pauses that feel organic, like a brave heart that's failing but rallying despite the odds.  Brass and wind chords blare, radiating out into space, as if exploring distance and searching the unknown.  The piece is a funeral march, of course, but also serves to structure time and its inevitable passing.  Thus the small trickling sounds, tick, tick, tick against the strong brass crescendi.  Cymbal crashes echo, the winds and brass wail, once more, in unison, the  sounds lingering after the act of playing has ceased. which is part of mreaning - Maderna is dead, but not forgotten, and neither, now is Boulez.

After Boulez, Debussy Three Nocturnes and La Mer, again connecting old and new. Last Thursday Roth conducted the Nocturnes at the Barbican, London, with the London Symphony Orchestra. Please read what I wrote about that, and its modernism, here.  With Les Siècles and Les Cris de Paris at the Philharmonie de Paris, the Nocturnes sounded even more refined and sophisticated, sensitive as this orchestra is to the finest nuances of timbre.  a very different sound, but exquisite.  My imagination blossomed, thinking back to Asia and dreams of new horizons.  Two very different Nocturnes in four days - what a treat !   Roth will be conducting La Mer with the LSO in a few weeks.  He's done it numerous times but it never hurts to hear it again, and again.  For an encore  the fanfare that concludes Debussy's Première Suite d'Orchestre premiered in its new performing edition by Les Siècles in 2012.  Please read about that HERE.