Bohuslav Martinů - The Epic of Gilgamesh 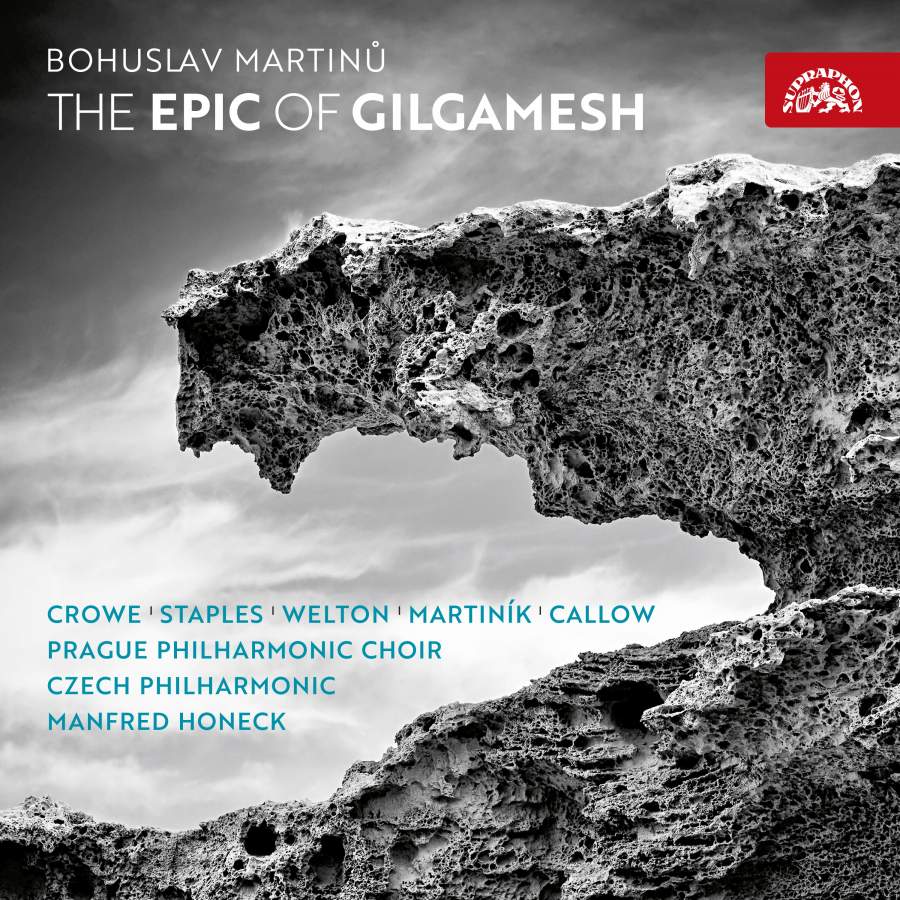 New recording of the English version of Bohuslav Martinů's The Epic of Gilgamesh, from Supraphon, the Czech Philharmonic Orchestra conducted by Manfred Honeck.  This is the world  premiere recording of the text in English. Martinů, wrote the original based on an English language translation which he disliked, for pragmatic purposes. "Nowhere would they sing my piece in Czech", he told his family in 1955.  He need not have worried.  Soon after, a Czech translation became available, which, to this date has been the standard version used in performance, with several fine recordings.  The piece is recognized as one of Martinů's key works and a part of Czech core repertoire. So what's it like hearing it in English ?

The opening erupts in the cry "Gilgamesh!" chorus alternating between soloist. group against individual.  Gilgamesh was all-powerful, but an oppressor  Martinů, who spoke good English,  was right about the clumsiness of the translation.  "To the appeal of their waiting, Goddess Aruru gave ear. She fingered out of clay......Enkidu made she, a warrior"  Jan Martiník sings the bass part. He's the only native Czech speaker in this cast, and possibly the youngest soloist. Because the text is so archaic, his (very) slight accent works well, since it emphasizes the stylized non-realism central to the work, and indeed to its origins. Yet Martiník also manages to nuance his singing with emotion. As he describes Enkidu, the wild man, finding human solace, his voice softens.  The music changes, flurries on harp suggest the flowing of water, the bringing of life to the desert from which Enkidu came.  The choral part (Prague Philharmonic Choir) is lit by searching lines in the orchestra.  The soloists don't portray individuals : the flow between choir, orchestra and individual voices progresses the piece structurally. Gilgamesh and Enkiddu end up in epic struggle, the choral lines moving back and forth until the dramatic breakthrough.
Andrew Staples sings the tenor part, demonstrating the unique artistic qualities of the English Tenor voice type. He makes the awkward, jerky text curl and bristle with sinister tension. "When  I entered the House of the Dead, the Queen of the Underworld, she saw me, she lifted her head, she saw me...."  Although the other soloists (Lucy Crowe and Derek Welton) are good, the "personality" of the voice type hints at extra levels of meaning, making this English version worth listening to.  Enkidu lies dying, and Gilgamesh, now his friend, grieves. Welton's last lines are followed by tiny broken fragments in the orchestra. The choir comments, male and female lines crossing and combining with the fluidity of waters in a river.
The final section, the Invocation, begins with vaguely "Babylonian" rhythms. An unearthly, high pitched "O!" wails from time to time (Lucy Crowe), her cry linking the disparate segments.  Tension builds. Gilgamesh enters the Temple of Enlil searching for the dead Enkidu. The orchestra pulsates savage ostinato, developing into a tumult of windswept frenzy.  Suddenly, the sound of single bells. For a brief moment, the two interact, as if in embrace. The baritone (Welton) asks about the afterlife. The bass (Martiník)  can only say "I saw, I saw", expressed with great feeling.
The Epic of Gilgamesh has come down to us in broken fragments : we don't know the whole story and cannot understand the full cultural context.  It's enough that we can glimpse it through the archaic symbolism of Martinů's music. The quality of singing in this performance (particularly the English tenor) makes it worth hearing, though the narration (Simon Callow), while suitably theatrical overpowers the purity of the music.  Thus I'd dare say that the Czech text should remain  unchallenged.  Whether it's better than the English translation or not, I do not know, but the richness and depth of Czech language recordings is far more rewarding, in particular the recording by Belohlavek, also with the Prague Symphony Orchestra and also for Supraphon, nearly 20 years ago.  In marketing terms, some might assume you need an "international" style, but quite frankly,  the pungency of Czech is unique, and brings out the true punch in Martinů.