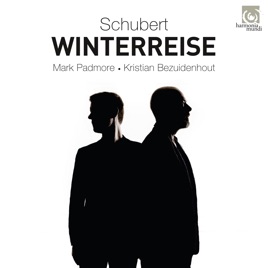 Schubert's Winterreise is almost certainly the most performed Lieder cycle in the repertoire.  Thousands of performances and hundreds of recordings ! But Mark Padmore and Kristian Bezuidenhout's recording for Harmonia Mundi is proof of concept that the better the music the more it lends itself to re-discovery and endless revelation.  Padmore and Bezuidenhout present a very thoughtful Winterreise which, in its pristine lucidity, connects extraordinarily well to the spirit of the cycle. In a winter landscape, and in darkness, you may lose your path but snow reflects what light there is. Background sounds are muffled, but what you do hear is accentuated.  You may be cut off from the world, but you are enclosed within yourself.  Serious listeners know every note of Winterreise  but rarely experience it like this. This is an unusual Winterreise but so perceptive that it enhances our appreciation of the most familiar of all song cycles. The pianoforte may come as a surprise to audience attuned to modern performance practice, but it's leaner timbre works well with Winterreise, and especially in the critically important final song, "Der Leiermann".


The only real comparison is the iconic Christoph Prégardien's recording with Andreas Staier, released in 1997, still a classic. Winterreise devotees will need them both. Staier, one of the great fortepianists of our time, noted that, in Schubert's time, pianos were very different from  modern concert grands. Staier and Prégardien performed a great deal of Schubert together, developing an approach more sympathetic to the intimate, personal Liederabend aesthetic.  Schubert was himself a tenor, though of course the songs are performed in many different ways.  The main thing is to be receptive to interpretation and non-dogmatic. Since the timbre of the pianoforte  is more delicate,  the voice part needs to connect.   Like Prégardien, Padmore came from a choral background.  The English tenor style favours purity and clarity, yet also lends itself well to a kind of rarefied spirituality. Not all English tenors are "English tenors"; it's a particular style.  Like Ian Bostridge, Padmore can sing with an edge that intensifies darker undercurrents in meaning. In Winterreise, this is of the essence, for Winterreise is an inner psychological journey, expressed through stages describing physical landscape in almost allegorical terms. Even the destination remains a mystery. Thus the value of approaches which allude to levels in the music beyond text alone.

Fortepiano gives the introductory bars a tremble which suggests the nature of the chill that is to descend. The lower notes stride with purposeful definition.  Padmore's voice curves. "Fremd!", he sings, rolling the "r" so it flies forth.  The sharpness of his consonants in contrast with the ring of the vowels creates a tension which works well with meaning. The protagonist is entering unknown territory, suppressing his fears to journey on. For a moment, in "Der Lindenbaum", he can rest and reflect, and Padmore's voice grows more tender, and the fortepiano rocks gently.  But falling asleep under the supposedly narcotic scent of  linden blossom means death. In "Wasserflut", the vocal line rises and drops. Good phrasing , like "Fühlst du meine Tränen glühen, da ist meiner Liebsten Haus", Bezuidenhuit's fortepiano maintaining a steady pace.  In "Irrlicht", the  brightness of fortepiano and high tenor suggest the character of the will o' the wisp, flickering elusively, luring the unwary astray. In lines like "fühlst in der Still’ erst deinen Wurm, mit heißem Stich sich regen!" (in "Rast!"),  the word "Wurm" here, feels satanic, diverting the protagonist from his mission.

In "Der greise Kopf", Padmore sings the first lines with a lyricism that rings with flute-like grace,  emphasizing the deathly near-whisper of "Doch bald ist er hinweggetaut".  We are being prepared for the songs that follow, where the landscape becomes increasingly surreal, reflecting perhaps the psychic trauma the protagonist is facing.  This is where the unique quality of the English tenor style pays off, its archness suggesting anguish.  In "Die Krähe", a crow stalks the protagonist like a Doppelgänger : is it friend or foe ? In "Der stümische Morgen", Bezuidenhout's fortepiano growls ferociously, evoking the storm, both external and internal.  Padmore's voice rises defiantly, but the protagonist is up against almost supernatural forces.  Thus the turbulence in "Der Wegweiser" , pulling in different directions.  Even the graveyard offers no solace. In "Mut!",  notice the way Padmore marks the tremble in the word "herunter", while  Bezuidenhouit pounds as fiercely as a fortepiano can.  Now the protagonist challenges God himself. "Will kein Gott auf Erden sein, sind wir selber Götter!"  In early 19th century terms, this is almost blasphemy.  He looks up and sees three suns, a natural phenomenom that exists in certain climatic conditions, but he thinks they resemble three staring eyes.  Is the protagonist mad or visionary ? The hushed horror in Padmore's singing suggest both possibilities.

And thus to "Der Leiermann" the climax of the whole journey.  Bezuidenhout's fortepiano creates a sense of fragility, the notes sparkling the way light shines off heavy snow. Is this brightness an illusion, like the will o' the wisp ?  A large, strong piano might suggest an element of hope, but a fortepiano emphasizes vulnerability.  The colours in Padmore's voice turn pallid,  his tone dropping as if he's watching a ghost.  There are moments of light, where the voice rises like a flute, as opposed to the drone of a hurdy-gurdy. But note the steady deliberation, as if the protagonist was falling into step with the Leiermann's death march.  The last word "dreh’n?"  rings out like one last call into the void, and the fortepiano’s last notes shuffle, deflated.  Padmore and Bezuidenhout don't present an ordinary Winterreise, and some won't get it because it is different. But it does offers good insights, even in a market teeming with excellent performances.
at January 18, 2018

Thanks for guidance and insight to these recordings, I've only got 3 other versions all with a modern piano. I picked up the Prégardien,Staier version a lossless download on Presto Classics for a measly £4.41.