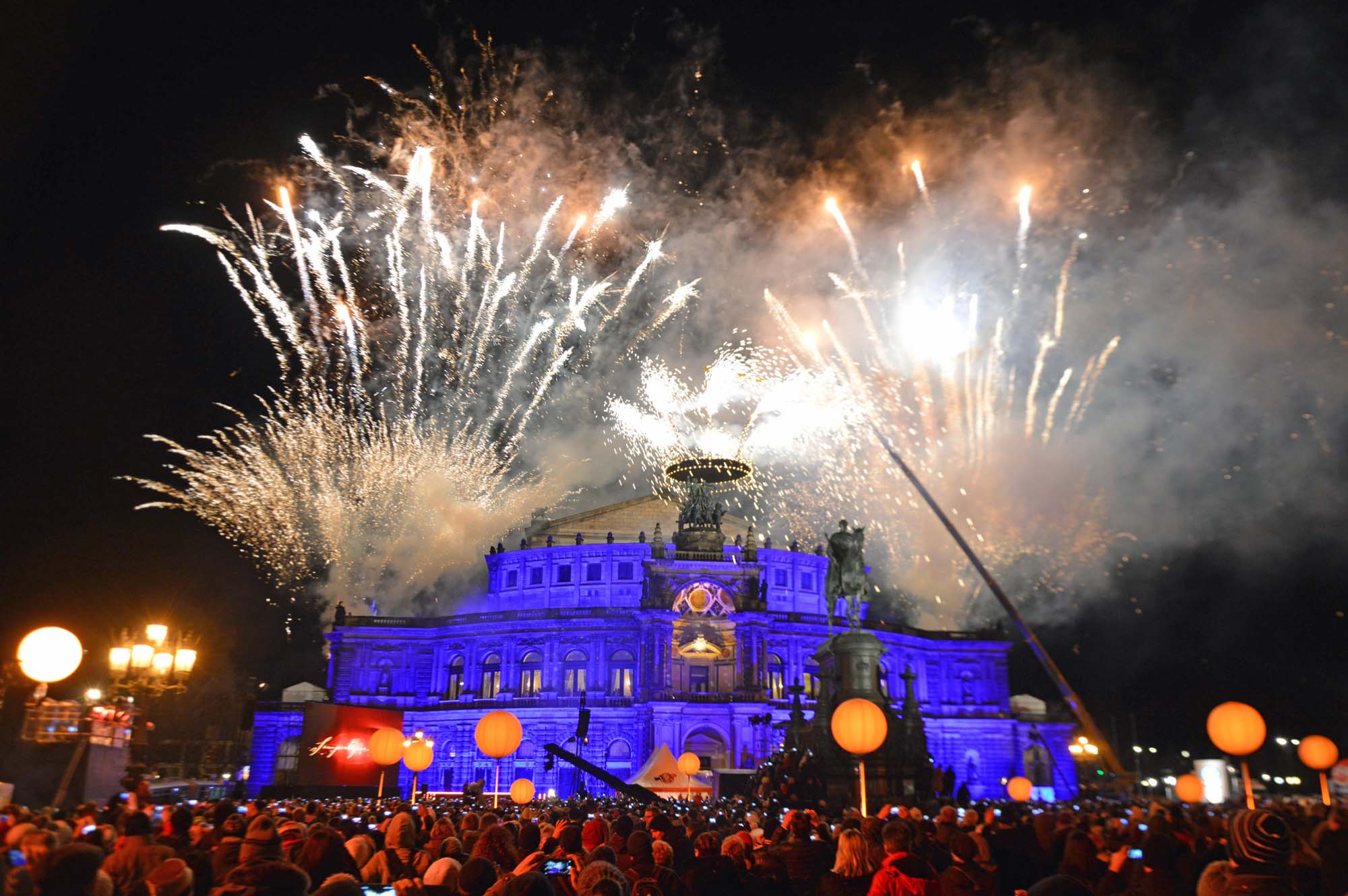 The Vienna Philharmonic Orchestra has named Christian Thielemann as conductior of the 2019 Vienna New Years Concert.  All the more reason Thielemann's Silvesterkonzert with the Dresden Staatskapelle.  He's done similar repertoire at the Dresden New Year's Eve concerts for years. Come 2018/2019 he'll be nipping back and forth, but one thing for sure, he'll be interesting.  Dresden Silvesterkonzerts don't always follow the same formula.  This year's concert marked the centenary of  UFA GmbH, the conglomerate behind the German film industry.  Yet the concert was more than music from the movies. Outside Germany, UFA is associated with the Nazis, who took it over in 1933. With the rise of Far Right extremism all round the world, it might be safer to steer clear. But it's far braver to confront the past, warts and all.  If we don't learn from the past, we'll make the same mistakes.
With some trepidation, I approached the programme. But the UFA situation is far more complex than simple black and white. Deliberate pun on the technology behind Weimar film. For UFA was associated with some of the finest art movies ever made, and with directors like Fritz Lang and F W Murnau.  Goebbels wasn't the first to realize that film could be used for mind control.  Witness the wave of Soviet films like October (more here) which are works of art but also propaganda.  When the Nazis came to power, the studios churned out stuff like Jud Süß which I confess I haven't been able to watch for more than a few minutes. And hundreds of Africans and Roma were forced to work in slave conditions.  But  UFA made over 1000 films in this period and not all can be condemned.  The gradation between art and the abuse of art is a dilemma we need to confront, if we are to learn.
Thielemann began with Erich Korngold's main theme and love scene from Captain Blood.  Korngold  didn't work at UFA but his music epitomizes what we'd now call "Hollywood Style" but like so many in Hollywood, he was European. Chances are he would have followed Max Reinhardt to the US whatever the circumstances, but by remembering him we also honour those who did not have a choice  Theo Mackeben remained in Germany, writing operettas and film scores, but  he knew Brecht and Weill, having conducted the premiere of Die Dreigroschenoper.  Angela Denoke sang his song Frauen sind keine Engel, not as politcial as Weill but certainly racy.   Hans May went into exile, but to Britain, not Hollywood, where he was part of the then-thriving British film industry.   Daniel Behle sang May's Heut ist der schönste Tag.  The show stopper, though, was Ich bin von Kopf bis Fuß auf Liebe eingestellt made famous by Marlene Dietrich. Elisabeth Kulman looked the part in a silvery gown, but vocally she's a lot stronger than Dietrich and could sing the "cadenza" arrangement.  The song comes from Josef von Sternberg's The Blue Angel  (1930) starring Marlene Dietrich.  The real star of that film was Emil Jannings, who'd established a career in Hollywood silent film.  He "reverse migrated" back to Germany. After 1933 he made movies for UFA on historical subjects, which in the circumstances had political overtones. Was he nationalist or Nazi ? Does nationalism necessarily lead to evil things ?
The Dresden Staatskapelle musicians morphed into dance band for fox trots, setting the mood for songs by Werner Richard Heymann, two from Die Drei von der Tankstelle (1930). The songs have an almost Schlager-like gaiety.   Saxophones and guitars turned the Staatskapelle into jazzband, with Daniel Behle hamming up stylishly in top hat and tails.  A moment for contemplation, though, with melancholy torch songs by Michael Jary, sensitively sung by Elisabeth Kullman.  Jary was a jazz musician, a genre the Nazis despised, but managed to scrape a living writing film scores for UFA. More songs by Mackeben , Friedrich Hollaender and Robert Stolz, "the luckiest man in the world" who made and lost several fortunes in the theatre. Winding up old, penniless and stateless in Paris, he was about to be imprisoned as an enemy alien, when he was saved by a beautiful 19-year-old heiress,who fell in love with him at first sight and became his (I think) sixth wife. They went to Hollywood where he made another fortune in movie music before returning to Dahlem and then Vienna (read more here).
Altogether a delicious concert,  played with total conviction, the material treated as serious music, not just "movie music".  One of the finest classical,orchestras in the world, letting their hair down without dropping a note.  When Christian Thielemann swings, he swings like a natural!  Thielemann and the orchestra had much more substantial music to work with in Georg Haentzschel's Große Suite in sechs Sätzen zu Münchhausen from one of the most extravagant movies UFA ever made, József Baky's Münchhausen (1943).  Goebbels gave UFA an unlimited budget. The Grand Canal in Venice, no less,  was closed off for the filming.  Thousands of extras were employed, including, alas, African prisoners of war and German-born men from former colonies in West Africa.  Münchhausen travels to the palace of the Grand Sultan, where the Turks are comic and the eunuchs camp. That's fairly benign by the standards of the time and not only in Nazi Germany, one should emphasize.  The Black men are dressed in silks, as slaves.  One wonders what was going on in their heads ?  At least they were - relatively - safe and many survived.  This is such an amazing movie that I'll write more in depth later.  Like the Wizard of Oz, it's fantasy but with quietly subversive political undercurrents,. The script was by Erich Kästner, definitely not a Nazi.
at January 02, 2018