"The Young Debussy", Debussy's Première Suite d'Orchestre (1882-4) with François-Xavier Roth conducting the London Symphony Orchestra at the Barbican, London.  An extremely thoughtful programme placing early Debussy in context, demonstrating his response to the influences around him . The modernist who was to write La Mer and Pelléas et Mélisande had deep roots in French tradition.  Debussy began the Première Suite d'Orchestre while still a student, but it is a fairly substantial piece, which runs almost half an hour in performance, displaying great variety. A showcase for a young composer, displaying his skills, but also very original.  Already, one can sense a creative personality. In 2012, Roth conducted  Les Siècles in the premiere of the performance edition of the piece completed by Philippe Manoury.  This LSO performance was its UK premiere, a different approach, but presented with equal flair and commitment.

Debussy's Première Suite d'Orchestre evolves over four movements, Fête, Ballet, Rêve and Cortège et Bacchanale, each highly individual.  Fête begins briskly, the animated pace giving way to a broader sweep in which other themes might be glimpsed, like a miniature overture, and concluded with affirmative punch. The brisk, confident strides moving on to different dance-like figures : a swaying theme for strings,  a duet for high winds and low, an elegant ballet.  With the LSO, Roth brought the "oriental" touches into sharper focus. These "voices from the East" are significant not simply as exotic decoration but because they serve to open up new horizons. Although Debussy didn't embrace outright orientalism, it informed his appreciation for new modes of thinking and expression.  The richness in the orchestration - lovely parts for violin - suggest the young composer's growing self-confidence. While Ballet is the most striking section, Rêve contains hints of what was to come - interesting textures and details. It ends with a flourish, leading into the fanfare which introduces the final movement.  Again, bright, clearly defined figures underlined by timpani, trumpets and trombones ablaze. Not a funeral march so much as valedictory procession, where pace is employed to shape structure, bounding forward to an affirmative conclusion. 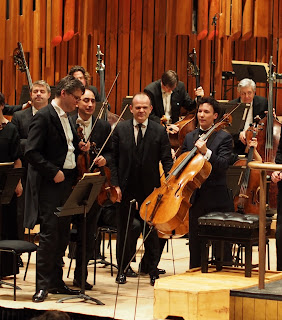 Framing Debussy's Première Suite  were Édouard Lalo's Cello Concerto (1876) with Jules Massenet's Le Cid Suite (1885).  Young Debussy preceded by a very young cellist, Edgar Moreau, born in 1994 but already with a good portfolio.  Lalo's Cello Concerto gives the soloist such prominence that it's almost a cello piece with orchestral accompaniment, since the deep voice of a cello holds its own so well.  A good sense of equipose : the balance between soloist and orchestra was carefully judged.  Moreau's line is assured, unfazed by the large forces around him.  Though the part is demanding, it's a concerto where the players are "in concert", respecting each other, almost a pas de deux. Indeed, it concludes like dance, for the allegro vivace resembles a Spanish dance, the soloist and orchestra in step together.

More Spanish music in Massenet's suite from Le Cid (1885), with Massenet using imaginary Spain to add alien, exotic colour, as he did with Le roi de Lahore and Cléopâtre.  Orientalism of different flavours paving the way for new musical expression. More dance, too.  The seven movements of the Le Cid suite each describe different forms of Spanish dance, giving French opera audiences the dancing they cherished so much.  But even without dancers to look at, dance is fundamental to the music, giving it pulse, agility and form.  There's no way you can listen to music like this without connecting to its energetic spirit.  Dance is a discipline where precision matters. Mess up the patterns and dance turns into brawl.  In an orchestra, ensemble matters. Freedom of expression, yes, but not free for all.  François-Xavier Roth, with his background in French baroque, understands the fundamentals of French style, and makes the connections between different periods.  From Lully to Rameau, to Grand Opéra, to the Belle Époque to Debussy and to the modern world : different sounds, but similar prinicples.  Roth and the LSO started the programme with Wagner, and the Overture to Tannhäuser.  That, in its time, was revolutionary "modernism", Wagner purporting to wipe out French dominance with new Germanic ways.  Nice performance, but in the context of French "modernism" of the same period, it didn't feel quite so innovative after all.