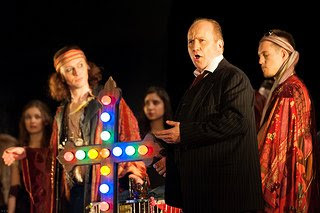 Don't miss UC Opera's Verdi I Lombardi at the Bloomsbury Theatre.  I Lombardi and Nabucco are almost companion pieces, and the Royal Opera House is doing Verdi Nabucco from 30th March, on a much grander scale, for Nabucco suits grand designs. So if you're going to the ROH Nabucco, it's worth seeing the UC Opera I Lombardi as background.

Visually, the UC Opera I Lombardi i is so striking that it would stun audiences in bigger houses with better facilities. The drama starts with a simple, dark backdrop, a monochrome tower, a bright telephone box. The impact is immediate. Verdi set I Lombardi at the time of the First Crusade to conceal its message at a time when much of Italy, once the seat of the Roman Empire, was ruled by foreign powers.This isn't really a battle between Lombardy and Antioch. The Lombards are tearing each other apart with rivalries, rather than facing their true enemies. In Verdi's time, Italy was a disunited conglomeration of small states that could not rise above petty self-interest towards a greater goal.

Although Christian themes dominate the opera, I Lombardi is not anti-Muslim as such.  Oronte, the prince of Antioch, becomes a Christian without much inner anguish.  One can read a nod here to Italian nationalism, since Italians dominated the church, although the Austrians, also Catholic, dominated the state in Northern Italy.Verdi must have been aware of the impact Griselda's hymn to the Virgin Mary would have on audiences. Caught up in reverence, they might, for a moment, forget the pettiness of worldly values and unite in the contemplation of more noble ideals.  In the chorus "Jerusalem !", nearly everyone on stage joins in unison, transfixed by the vision before them. 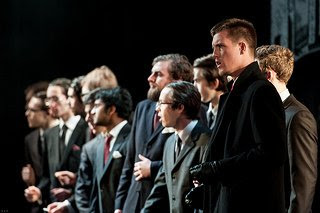 This staging, designed by Will Bowen, directed by Jamie Hayes, and produced by Rosie Hughes, places the action in a land that hovers between modernity and a fading memory of the past, just as Giselda inhabits an alien land far away from her origins. Phone booths are relics. We don't communicate like that much now.  This is an allusion to the theme of nostalgia that runs through the opera and fuels visions of an idealized future.  The Tower is a Victorian photo of a real pub in The City of London, which you can still visit.. Once it was a tavern where cock fighting took place. It's a subtle detail but cogent. The Lombards are acting out a cock-fight on a grand scale.

Ellan Parry's costumes also follow this theme of unspecified timelessness.  We could be at any time in the last century, or in the present. The men wear sharp suits, as so many Italians aspire to, but preen themselves on machismo. Without true religion, crusaders are no more than street gangs spreading their turf. At the end, chorus and remaining soloists stand together, their faces shining as they contemplate Jerusalem, at last within sight. We don't need to see a mock up. We can hear it in the orchestra and in the voices of the singers, and see it in their shining faces. Jerusalem isn't a physical place but a state of mind.

UC Opera is part professional, part amateur so the performances were good enough. Charles Peebles conducted. Katharina Blumenthal sang Griselda with firm assurance. John Mackenzie sang Pagano/the Hermit, pushing a supermarket trolley with neon cross. This was wittier than you'd expect. Pagano means "pagan", and the Hermit is an outsider, who has taken a vow of poverty. In these drab surroundings, the jewel colours of the cross shone even more brightly. Jeff Stuart sang Arvino and Adam Smith was a heroic Oronte.  Sally Harrison sang Viclinda and Carola Darwin sang Sophia. Andrew Doll sang the Prior. Edward Cottell sang Pirro  and Joseph Dodd was a distinctive Acciano.