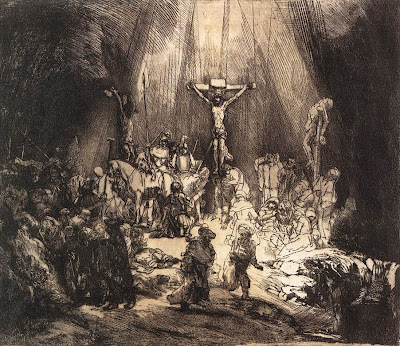 Martin's Golgotha gets performed fairly frequently these days, perhaps because it's an alternative to yet more Bach Passions. Those will never be equalled, of course, but Golgotha represents a different aesthetic. Bach was confident in his faith, but in our uncertain times,  Golgotha might speak to those who aren't so sure.

Significantly, Martin began writing Golgotha in 1945, when Europe was torn apart by war. While he was working on it came news of the Holocaust, of Hiroshima and Nagasaki, and the start of the Cold War. The Soviets marched into Eastern Europe, and the Communists took China. It must have felt like Armageddon.  Martin (1890-1974) was Swiss, theoretically "safe" from political chaos, but moved in 1946 to Amsterdam. This was a huge mid-life upheaval, especially as the Netherlands was still recovering from the German Occupation. In Holland he saw a copy of Rembrandt's etching The Three Crosses which inspired him to write Golgotha. Jesus hangs from the cross in the centre, lit by a dramatic shaft of light from above. Whatever the light may be, it throws everything else into shadow. All the suffering that went before, the soldiers, the world, all meaningless in the face of the divine. Two thieves hang on crosses at the side. One mocks Jesus for willingly letting himself into this situation. The other, who knows a thing or two about lowlifes, recognizes that Jesus isn't a crook.  Jesus turns to him and says  Truly, I say to you, today you will be with me in Paradise.  What it signifies is that even the lowliest sinner can be redeemed.