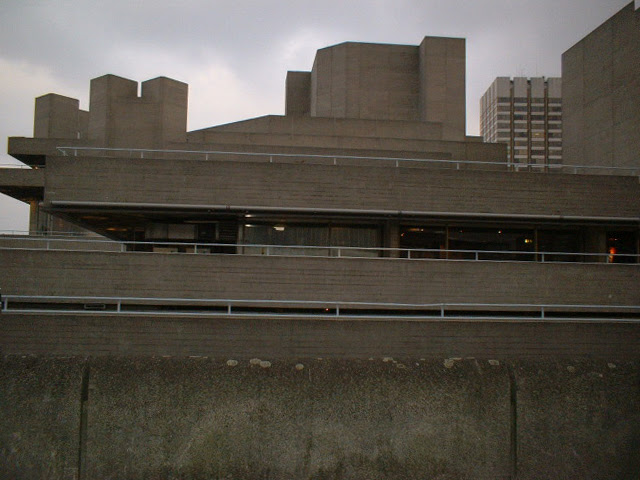 "The Festival Wing". That's the name for a project to revamp the South Bank by building a glass dome in the space connecting the Royal Festival Hall, the Queen Elizabeth Hall and the Hayward Gallery.  More details HERE from Fielden Clegg Bradley Studios, the architects. The South Bank Centre also has an online exhibition HERE.  There are also plans to redevelop the area behind the RFH and Belvedere Street. There's also an article by Rowan Moore in the Observer HERE.

The South Bank Centre long ago outgrew the space on which it was built sixty years ago. Filling the gaps between the buildings make sense up to a point,. Yet those concrete wastelands between the buildings were part of the original design concept. Just as the original designers intended, the empty spaces have been colonized by "ordinary" people, though they probably didn't think in terms of skateboarders, graffiti and urine. Concrete aesthetic leads to such things.  There's nothing wrong with them in principle because it livens things up.

But the primary purpose of the South Bank is culture. Culture does, I think, include graffiti, but a skateboard park isn't the most cost effective way of delivering culture on land as valuable and unique with magnificent views over historic London and the Thames. The proposals seem reasonable for what they are but do they really solve the long-term problems facing the South Bank? Are they band aid quickfix where major surgery is needed?

The problem with the South Bank is that it tries to do too much for too many  Music events of all types from orchestral concerts to pop concerts, visual arts and literature, theatre and multi-cultural events, chidren's activities, funfairs and foodfairs. Can any single venue cater to all? I'm not the only person to notice the watering-down of the South Bank's classical music services.  Once the South Bank did innovation, like the Messaien and Nono festivals. Now it does pre digested, over simplified commercialism like The Rest is Noise. Anyone could have programmed that. In an age of cutbacks why should the public purse pay for Alex Ross ?

Moreover, the South Bank is one of the few public open spaces in the area; it also serves as an important social service. Where else can Londoners take their kids, chill out and have fun in this area? It's also an escape from the office blocks and social housing in the vicinity. Restaurants and shops are an essential part of the mix, and they bring in much-needed income. Trouble is, the South Bank these days hardly resembles a cultural centre anymore, which defeats its whole raison d'etre. Parking is almost impossible, and disabled facilities poor.  Even the RFH needs a rethink, rather than cosmetic updates.

Another inescapable fact is that the South Bank can be, and should be, a national and international arts centre. That means offering top quality which isn 't available anywhere else. Then it would attract visitors from all over the country, and from abroad. It's politically trendy to be local-friendly but the Unique Selling Point of the South Bank is that it has the potential to be the flagship of British culture,  Just as the Royal Opera House puts London on the international map, so could the South Bank. Already, the Barbican is fulfilling this role with its alliances with other venues and far sighted vision. If the South Bank is to bea glorified community centre, couldn't it be a centre for a much more focussed community ?

Architects design buildings, they don't design cultural policy. The responsibility for that lies not only with South Bank management but with the Arts Council. Where is the vision ? Where is the leadership ?  How do piecemeal patches fit in with a wider overall strategy for the arts ?

A much more comprehensive solution to the South Bank's problems might be to diversify and decentralize. Even the Barbican is expanding to new premises and areas.  Notice that the Barbican retains core facilities like the Barbican Hall while outsou4rcing services that can be housed elsewhere.. The beauty of the Barbican approach is that they go into the community, rather than expecting the community to come to them.  There is no sacred rule that different facilities have to be housed in the same place. Of course there are people who turn up on the day and take whatever is on offer, but that kind of market is inherently limited,

Big scale facilities like the Royal Festival Hall can't be relocated, because they cost so much and are so specialized. But things like poetry workshops can happen anywhere. If the South Bank were decentralized, other parts of South London would benefit it things were spread around a bit. Think of LSO St Lukes rejuvenating Old Street north of the river.  It's infinitely better to do a few things extremely well than cram too much together.  There's no reason why the South Bank should become a bazaar. An arts centre should aim at excellence, rather than watering down its main purpose to look trendy.

Of course the proposals may all be pie in the sky, since they've only secured £20 million of the £120 million they need. And let's face it, while culture may be essential to the life of a nation, so are health services, education and welfare. These proposals are all very well, but it might be more cost effective in the long term to rethink the whole concept of the South Bank in a much more radical way. Throwing money at problems doesn't make things better. Vision is what vreally counts.
at March 11, 2013