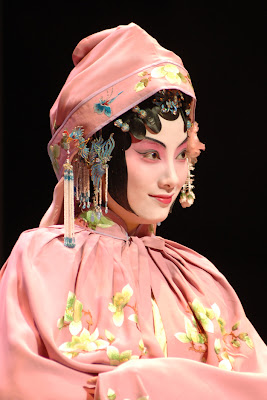 Cubans singing Cantonese opera? A hundred years ago there was a thriving Chinese community throughout the Caribbean and Central and South America,  descendants of coolies and merchants. The communities were big enough that they could sustain Chinese culture, even though most of the people had little contact with China.  Here is a link to a remarkable film  based on unique archives. Although it is in Cantonese, it's easy to follow because there are English subtitles and some amazing archive photos.

The film focuses on a woman called Ho Chou Lan, who was born in 1920 to a mixed-race Cuban -Chinese family. Her natural father died when she was one month old. Her mother remarried an immigrant from Toi Shan. called Fong Biu. Thus Ho Chou Lan grew up speaking Cantonese, with a Chinese education. Fong Biu was an opera fanatic, so he taught his stepdaughter from the age of 4. By her teens, she was appearing professionally. The Cuban Chinese community was big enough to support a troupe of local-born opera singers, some mixed race.

Most of the Havana Chinese community have left Cuba, but Ho Chou Lan  still lives there, in great poverty She knows enough Chinese to read the typesets in an old printing press: once  there were 4 Chinese language newspapers in the region. She shows us a yellowed manuscript from which she can sing the old operas. She also kmows what the operas are about and can explain  some of the idioms. Later, she gives a performance in what seems to be someone's living room. She puts on a traditional costume and sings from memory. Her grandson accompanies, playing the cymbals. He's Cuban, hardly a trace of Chinese, but he can pick up the rhythms of the old lady's song and improvise. Someone plays a western violin. There is another singer, also in costume, but she's learned phonetically and doesn't really have the sounds in her soul, like Ho Chou Lan does.  For the film maker, Lau Pok Chi, from Hong Kong, these women are fascinating, remnants of a once thriving Wah Kiiu  (overseas Chinese) world.  "They've never seen China", he says, "I wish we could take them to Toi Shan"; that's the district where their ancestors came from. There are houses there built in a vaguely western style, with money the emigrants sent home. It's preserved as a historic monument. Ho Chou Lan is something of a monument, too.
at March 10, 2013