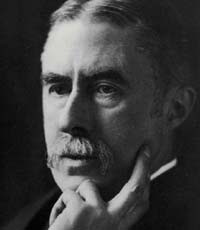 A E Housman inspired more English Song than any other individual. The most famous settings of his poetry need no introduction, but one of the great delights of the Ludlow English Song Weekend is its regular excursions into the lesser-known byways of the genre. This recital "The One who Kept his Word",  (on BBC Radio 3 here) was built around readings from Housman's extensive correspondence. We meet Housman first as a young man, then as a struggling bureaucrat, as a successful author who sneered at composers like Ivor Gurney and at last as a painfully obnoxious Professor of Classics at Cambridge, a career path which would now seem near impossible. A Shropshire Lad  revels in pastoral nostalgia, far removed from reality, but that's perhaps part of its appeal. through these images of "lost content" one can dream.

The title The One who Kept his word" comes from the poem Because I Liked You. Like isn't quite the word, really. Most  of his adult life, Housman was in love with a straight man. Housman was as out as it was possible to be in his benighted times, and to some extent things haven't really changed.  At Ludlow not all that many years ago, I mentioned poems like The Encounter to someone who claimed he'd set every one of Housman's poems, who became enraged that I should think such terrible things. Because I Liked You is brutally honest, yet hopeful.  The two men separate forever, coldly, but Housman imagines that one day his friend will " Halt by the headstone naming/ The heart no longer stirred,/ And say the lad that loved you/  Was one that kept his word".

In true Ludlow English Song Weekend tradition, a very unusual choice of songs and composers. The Loveliest of Trees, not RVW, not Butterworth but Arthur Somervell,. We also heard settings by Moeran, Ireland and Butterworth.  But the big draw was the Judith Bingham premiere Zodiack, a special commission for Ludlow. It's a long piece, almost closer to plain chant than to piano song., so distinctive that it will take several listenings to absorb, but intriguing, for it expresses the ambiguity in Housman's personality,as if the poet was hiding himself behind a cloak of Classical archetypes. I thought of Harrison Birtwistle, who doesn't hide himself  so much as weave tantalizing puzzles with classical myth. A E Housman and Harry, so different but maybe not so different after all.

The half moon westers low by Benjamin Burrows (1891-1966) is vividly pictorial,  describing turbulent rain clouds. The mood of the poem is more disturbing, for Housman's friend married and moved to India.  "Wide apart lie we, my love, and seas between the twain"  Nonetheless it's very beautiful music, although the wind imagery works better with the poem From far, from eve and morning, surprisingly a less accomplished song.  Burrows's music might be worth exploring further, though I'm not that sure of Graham Peel (1887-1937), whose Say Lad. have you things to do? is greatly eclipsed by Moeran's setting.

Another surprise: Morffyd Owen ( 1891-1918)  Owen was a  surprisingly prolific composer though she died before her 27th birthday. In London, she studied at the Royal Academy of Music after having graduated in composition from Cardiff in 1912. Sher was also a mezzo, and married to Ernest Jones,  an associate of Freud. What an interesting person she must have been!  She was greatly interested in Welsh folk song, so it's intriguing to think how that might have influenced British music, had she lived.  Her setting of  When I came last to Ludlow is fairly straightforward, almost like a hymn, though the subject is secular. Ludlow's good for introducing obscure composers - from here I discovered Rebecca Clarke, now a long-term favourite.

Two composers about whom I could find no information : Jane Hamilton and Martin Bussey. Bells dominate in Hamilton's Bredon Hill but the song is nowhere near as original as Butterworth's, or Vaughan Williams. Her With Rue my Heart is Laden  pales in comparison with other settings of the poem. Much more interesting is Martin Bussey's  Into my Heart, a setting of Because I Liked You. An intriguing piece which hovers mysteriously, suggesting that the composer understands what Housman was refering to. Is Bussey modern?   He certainly sounds like a fresh voice.

It's wonderful that BBC Radio 3 is broadcasting from Ludlow, since Ludlow's a very small town and not everyone can get there.  Iain Burnside ran the BBC programme Voices for more than ten years, and has performed at Ludlow since the start, so he's drawing together two threads of his experience. This programme would have worked extremely well live, as it's typical of the Ludlow tradition. However, it doesn't translate well to the radio. For one thing, the technical way it's set up does not work. The markers showing where songs begin don't work. You have to guess where the songs are and keep hitting on the spoken parts, which though interesting heard once, become irritating heard several times over. Live, one can take more spoken word., On broadcast, one needs more song.  The singers were Anna Huntley, Marcus Farnsworth and Alexander Sprague, with Iain Burnside the pianist. The reader was Philip Franks.
at June 10, 2015