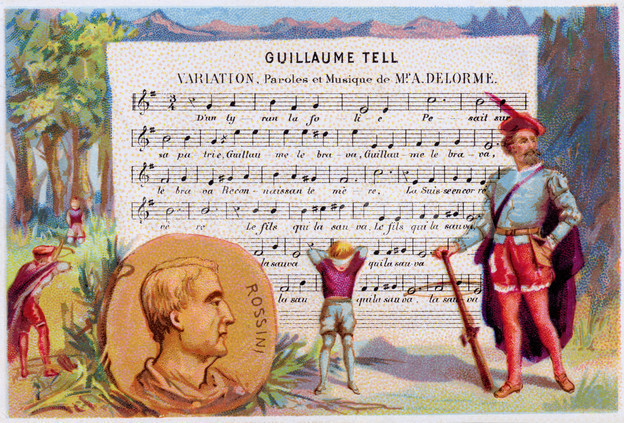 Rossini Guillaume Tell at the Royal Opera House, London. My review is HERE. Antonio Pappano conducts. He's sublime in Italian repertoire (even when it's in French) and this is one of his great favourites. Tonight he'll be conducting the Royal Opera House Orchestra, so it will be good to hear how this compares with his other band the Orchestra dell'Accademia Santa Cecilia with whom he conducted the devastatingly good Guillaume Tell at the Proms in 2011.  Their recording is one of the must-hears although the sound quality is a bit flat.  (There are bootlegs of the Prom around, and no doubt of the Accademia Santa Cecilia's other performance.)  At the Royal Opera House, Pappano's using the same principals as he did before - John Osborn, Gerald Finley, Malin Byström. This will be the third different Guillaume Tells this year, which started with the truly amazing Bryan Hymel performance in Munich -- unimpressive production, alas).

William Tell is an icon because he was an ordinary rustic who stirred things up and beat off the Austrians. To this day, the Swiss do things their own way. Perhaps geography helps. You can't easily invade the Alps or subdue a peasantry that knows the mountains. For Schiller, Wilhelm Tell  showed how ordinary people could resist tyrants. For Rossini, too, perhaps. Part of Italy was ruled by Austria, so there was a limit as to how explicit he could be. What I enjoyed about Pappano's Proms performance was the sense of nature and wide open spaces. Antonio Pappano conducts with expansive brio, bright dynamics and sparkling tempi. Rossini is painting wild, untamed landscape into his music. Panoramic vistas, winds, storms on lakes, impenetrable forests and, again and again, the image of the sky, symbolizing freedom.