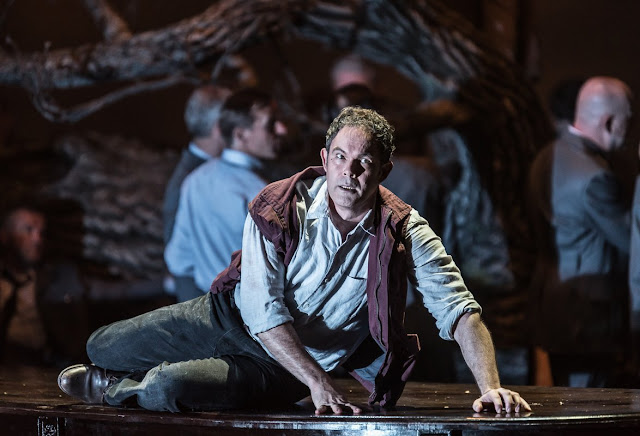 What kind of sadistic regime would force a man to shoot an apple off the head of his own child?  Terrorist tactics, which ISIS might adopt to silence opposition. Schiller and Rossini might want us to sympathize with the Swiss, but a sizeable part of tonight's audience at the Royal Opera House Guillaume Tell clearly sided more with Gesler and his politics of intimidation.  As if orchestrated on cue, vociferous booing and shouting erupted, followed by shouting,  which continued during the music. At one point someone shouted as William Tell was taking aim. Luckily, the apple was wired to explode. If Gerald Finley had been firing a real arrow, he might have flinched and poor Jemmywould have been killed. Perhaps the booing mob think that's funny. Let's have no illusions that booing has anything to do with art. A lot of these booers take pleasure in inflicting pain.

Forcing a man to shoot an apple off a child's head is an act of grotesque cruelty. Yet these booers didn't seem to mind. What drew their ire was a short sequence in which a woman is bullied by drunken soldiers, who tear her clothes off. The scene lasts but a few seconds, but the booers must have been waiting for it all evening. But as we know from Boko Haram and ISIS, women get raped. That's what we should get upset about, not the depiction thereof. In any cse, the scene is not gratuitous, but follows in from many sequences  which show how savage Gesler's men can be. As a friend observed, a rustic dance in the midst of war would be silly. The antimodern crowd are always demanding "Trust the composer". So here are Rossini's stage directions :

"Gesler's men force the Swiss women to dance with them. The people show by their gestures their indignation at this violence. At the conclusion of the dance they all prostrate themselves before the
trophy. Some soldiers drag forward Tell and his son whom they have noticed still standing in the middle of the scene"

During the Overture, Jemmy (Sofia Fomina) is seen playing with toy soldiers. We see his face close up on a screen. he's completely caught up in his game. If only more adults still had such powers of imagination!  Jemmy picks up a comic book, "William Tell by Frederick Schiller". and gets engrossed.  Perhaps the booing mob would prefer a comic book production, where everything is simplified in simple outlines. Fortunately, director Damiano Michieletto has put more thought into this production than the comic book crowd could comprehend.  Using the dance sequences as dramatic narrative allows Michieletto to develop Jemmy into a fully fledged personality, every bit as much a hero as his Dad, only smaller.  At one stage, the boy mimics his Dad's every move, as kids do.  The villagers' community seems as close knit as extended family. This emphasized Jemmy's, youth and innocence, which makes the horror that descends on his family and community even more poignant. It helps that Sofia Fomina is a wonderful character soprano, a rare and special breed. She stays in role even through the curtain call. 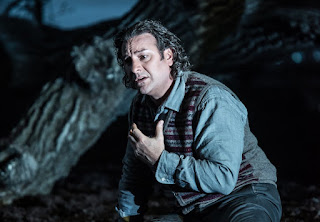 When the Austrians arrive this vernal purity is shattered. A vast uprooted tree dominates the stage. Perhaps it was uprooted in a storm or an avalanche, Nature's way of inflicting change.  Jagged, twisted branches and roots suggest cataclysmic trauma, yet,  as mountain folk know, uprooted trees  support a fertile ecosystem. The villagers will eventually triumph, the invaders will be repelled. The storm at sea scene in the final act is almost impossible to depict literally, so Michieletto and his designer, Paolo Fantin, come up with a brilliant imginary solution.  Jemmy, in his anguish, grabs the comic book to see how the story will end.  The cartoons are projected above the stage, so we can follow them as avidly as Jemmy does. For a moment, we too are back in the innocence of childhood. And so the village mothers bathe their children, cleaning away the pollution that Gesler's men have inflicted on their land.

House favourite Gerald Finley sang Guillaume Tell with depth.  John Osborn sang the fiendishly difficult part of Arnold, with the Asile héréditaire. Delicious singing, to match Pappano's passionate conducting.  If only I didn't have such vivid memories of Michael Volle and Bryan Hymel who sang the opera in Munich a year ago!  On the other hand the Munich production was awful, though it did try to engage with some of the underlying ideas, like gun violence. Malin Byström sang a good Mathilde. Sofia Fomina was an excellent Jemmy.  Eric Halfvarson sang Melcthal, Nicolas Courjal sang Gesler, and Michael Colvin sang Rodolphe, an extremely well-characterized performance which made a much bigger impact than the amount allocated to him in the score.  And as for Antomio Pappano?   As always, tops in this repertoire, to the manner born.

PS Re the supposedly controversial scene. I'd wondered why one woman was singled out, instead of the group hiding under the tree.  Then I realized that seeing one woman focuses on her movements. In a strange way this was "choreographed" in the sense that the movements matched the music. For example, a little flurry in the woodwind, and one of the men grabs at her but pulls away. Thus the scene takes time because it respects the music. The actual moment of nudity is very brief indeed, and there's no actual sex. Rape isn't about sex, but about bullying.

I am sorry to see from the press that ROH has seen fit to apologise for the "offensive" scene. Apologies are entirely due from the other side -- the utterly discourteous audience members who harried the singers and orchestra. One doesn't know if Pappano felt at all inclined to halt the orchestra, turn around and lecture the audience about common courtesy before continuing. Perhaps he should have done. It wouldn't have been the first time a response something like that had happened. Buying a ticket does not entitle audience members to treat hard-working, talented performers as slaves who are at their bidding. Perhaps some of them treat their own employees like that, but the opera house is no place for it.