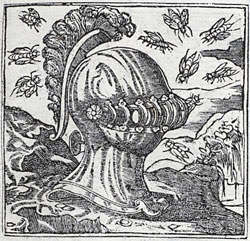 "I should feel suicidal" wrote Gerald Finzi in October 1938, a few weeks after Chamberlain sacrificed Czechoslovakia to appease Hitler, "If I didn't know a song outlasts a dynasty".

Against the horrors of the world around us, what can an artist achieve? Finzi neither rattled sabres nor swords, but in his own quiet, obtrusive way stood up to tyranny. At Ashmanswortth, he ran a self sufficient organic farm long before such things came into fashion. He grew apples, preserving varieties that otherwise might have been lost to cultivation. His son Christopher (Kiffer) carried on these ideals. Years later, when Daniel Barenboim, Hilary Finzi's sister's husband, came to visit the family on holiday in France, he was horrified to discover that they did "organic plumbing".

Finzi also collected 15th to 17th century poetry. His library, still preserved intact, is one of the most comprehensive study collections in this country. Finzi believed that art served a purpose greater than time or place. Art endures.

In the dark days of 1944, Finzi wrote Farewell to Arms, nothing like the Ernest Hemingway novel apart from a  general sense of pacifism. Finzi's Farewell to Arms connects two poems based on the theme of change..

The helmet now an hive for bees becomes,
And hilts of swords may serve for spiders' looms;
Sharp pikes may make Teeth for a rake;
And the keen blade, th'arch enemy of life,
Shall be degraded to a pruning knife.
The rustic spade
Which first was made
For honest agriculture, shall retake
Its primitive employment, and forsake
The rampires steep And trenches deep.
Tame conies in our brazen guns shall breed,
Or gentle doves their young ones there shall feed
In musket barrels
Mice shall raise quarrels
For their quarters. The ventriloquious drum,
Like lawyers in vacations, shall be dumb.
Now all recruits, But those of fruits,
Shall be forgot; and th'unarmed soldier
Shall only boast of what he did whilere,
In chimney's ends
Among his friends.

His helmet now shall make a hive for bees,
And lover's sonnets turn to holy psalms.
A man-at-arms must now serve on his knees,
And feed on prayers which are Age's alms.
But though from Court to cottage he depart,
His Saint is sure of his unspotted heart.