Ernest Chausson's only opera, Le roi Arthus, at the Opéra Bastille, Paris, has long ceased to be a rarity.  But is it truly understood in the context of Chausson's other music, or its place in the era in which it was created?   Part of the problem is that everyone thinks they know the subject matter - King Arthur, Queen Guinevere and Lancelot - when, in truth every re-telling of the legend is unique. 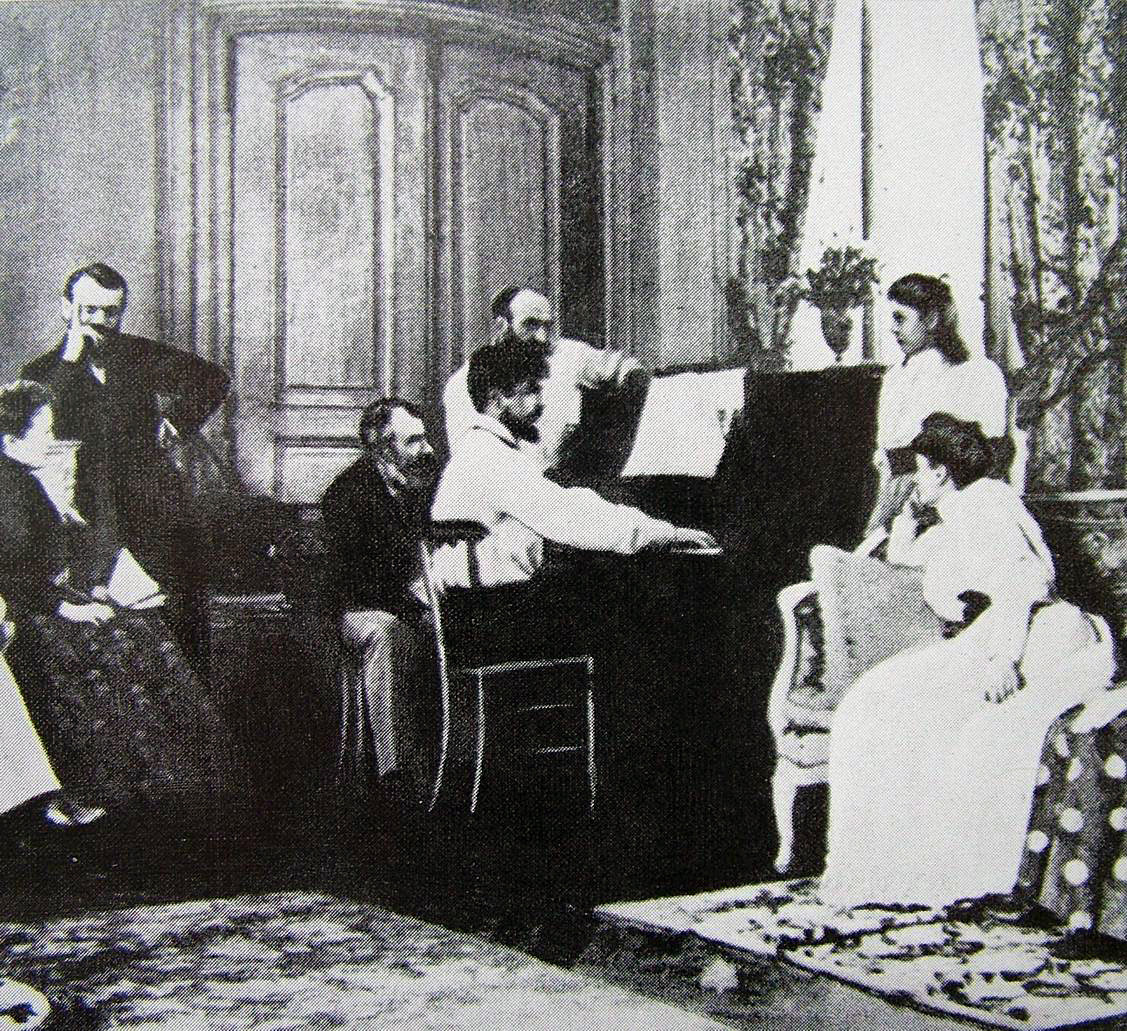 Chausson and Debussy were very close friends. They're pictured together here, Debussy at the keyboard, Chausson turning the pages. Both were influenced by the artistic currents of their time, Impressionist painters, for example, found new ways to capture light through small disconnected brushstrokes. Japanese art also had a huge influence in opening out western concepts of art and design. Debussy collected Japanese art, responding to the way Japanese artists integrated outlines and supposedly blank space. This was an era of progress, when the Third |Republic was prosperous, developing international trade and colonies. Debussy was almost certainly aware of non-western music since Japanese and Indonesian musicians appeared at various Paris Expositions.
From this cultural regrowth sprang   fin de siècle fascination with psychology, dreams and the exotic, heading towards new possibilities of form. Chausson knew Maeterlinck's poetry well, so it's a pity he wrote his own libretto for Le roi Arthus, but in a sense, Le roi Arthus is a predecessor to Debussy's Pelléas et Mélisande (1902) in that they both inhabit the same rarified Symbolist ethos.

Le roi Athus was written between 1886 and 1895, contemporary with Chausson's Poème de l'amour et de la mer, his famous sets of Mélodies and even  Poème where the human voice is replaced by solo violin.  Like Chausson's other works, Le roi Arthur is lush, with beautifully chromatic harmonies. But aesthetically, Chausson , like Debussy, operates in a different realm to Verdi or Wagner, and even to Massenet.  The narrative in this opera is simple.  King Arthur is successful in battle, but his wife and favourite Knight fall in love with each other.  The relative inaction in the plot  is compensated for by elaborate monologues in which the main protagonists sing at length about their emotions. so the quality of the singing matters.

In this production at the Opéra Bastille, Sophie Koch sang Genièvre. Much of Chausson's work suits high soprano, but Koch negotiates the texture well, adding richness to a part defined by chastity and female virtue.  Not for nothing Genièvre, commits suicide by strangling herself with her own hair, for Symbolists associated long hair with sexuality and female power. Cue Mélisande in her tower.  I would have thought that technically improbable, but that's opera!  Koch's acting was plausible enough, though those who want gory realism might want blood and swollen features.

Roberto Alagna sang Lancelot. Surprisngly, the dynamic between boy-like Koch and a more solid Alagna worked well. The part doesn't stretch his voice, so he can put his efforts into rounding depth, singing character rather than notes. He's even convincing in his death scene, where seemingly dead, he suddenly starts singing with full voice, inspiring his King to think again on the purpose of life.  Thomas Hampson's King Arthur was impressive too. He delivered with grace and authority, while managing to suggest the tortured soul that lies behind the King's surface.  He loves, forgives and learns to live.  The heroism in  Chausson's Le roi Arthus is inward, not outward. Alexandre Duhamel sang Mordred and  Peter Sidhom sang Merlin.

While the vocal parts provided narrative, the orchestral parts provided dramatic depth.  Indeed, one might even suggest that the orchestra acts as main protagonist. Philippe Jordan conducted with exceptional grace and elegance, which suits this music, and its symbolist elusiveness extremely well. Years ago Leon Botstein conducted this opera with so little understanding of idiom that he killed it for me for a long time. There';s a reason why some people can only conduct things for which there's little comparison.  Much better that a true specialist like Jordan creates the music as it should sound. Perhaps he's grown up with Le roi Arthus. His father, Armin Jordan, made one of the first recordings. Jordan's mother is a dancer: perhaps that's why he moves with the spring of a dancer, which translates beautifully into agile, intelligent interpretation.

The staging, by Graham Vick will enrage anyone who expects no more than TV costume drama. But Le roi Arthus is symbolist poetry, it's not meant to be comic-book grotesque. It's enough that appearances are hinted at rather than grotesquely exaggerated. So Arthur and his best mates wear fancy silver cable knitwear instead if chaiin mail? So what  they can sing better if they're comfortable.  The empty stage in Act Two reflects the situation Genièvre and Lancelot find themselves in. They're isolated. So much for the trappings oif wealth when your hearts are broken. hence the tacky sofa.  Desolation runs through this story : men are killed for no obvious reason apart from the idea that that's what Knights do.  Above the stage, a shot of a tower on a hill, suggesting Cornwall or Glastonbury or other places of Arthurian legend. So much for glory when it doesn't bring happiness to the King. It's not a "pretty" staging, but then, the opera isn't "pretty" either.  Rather, we should be listening to the cool elegance in the orchestra, providing the shimmer of polished steel, the invisible ideal which Excalibur symbolizes, which, ultimately, the Knights of the Round Table don't live up to.
at June 03, 2015