It's 1929. Chinese viIlagers carry vegetables to market, suspended on long poles, traditional style. They have to hurry to grab a good pitch. An old lady stumbles behind. Suddenly, she's hit by a fancy modern car, even though the road is empty. The owner, a smart young man in western clothes, coming home from an all-night bender, tells the driver to move on, regardless. A peasant helps the old lady up, commiserating: "The rich is always like that". With this little vignette, a remarkable movie begins.

Don't Change Your Husband 情海重吻  aka Kisses Once was made by the Great Lilium Picture studio. It was one of several Shanghai studios making films for Chinese audiences, dealing with issues of social change and modernization in the Republican period, Republican as in Chinese Republic, post 1912.  Chinese cinema reflected the aspirations of a nation struggling to progress from feudal stagnation towards a better world.  Very much in the Weimar spirit, although the challenges, in China, were even more extreme. Even the studio name "Great Lilium" is nationalistic, since the lily is one of the symbolic flowers of China, and regrows after lying dormant in the earth.

This film deals with the lives of very wealthy people indeed, who own cars and live in huge, fancy mansions decorated in sophisticated art deco. Even the older generation lives well - look at the props! Proper antiques, elaborate blackwood funiture, scroll paintings and embroideries , the high style of the prosperous merchant class. There was so much of it around then that the studio didn't need to use replicas.

The camera shifts to Shanghai, where workers flock like ants into western-style office buildings. Almost immediately, we see Wong Chi Ping, (Lynton Wong 王乃東) get fired for being late (a significant detail). That's no big deal to him because he's reasonably well off. .Look at his home with its Directoire and French tapestries!  However, the maid finds a letter which implicates his wife in an extra-marital affair. Next, we're in the home of Chen Mong Tien,  "a dissipated youth",  (actor Tang Xinyiu 湯天綉), who often played a womanizer and sophisticate. 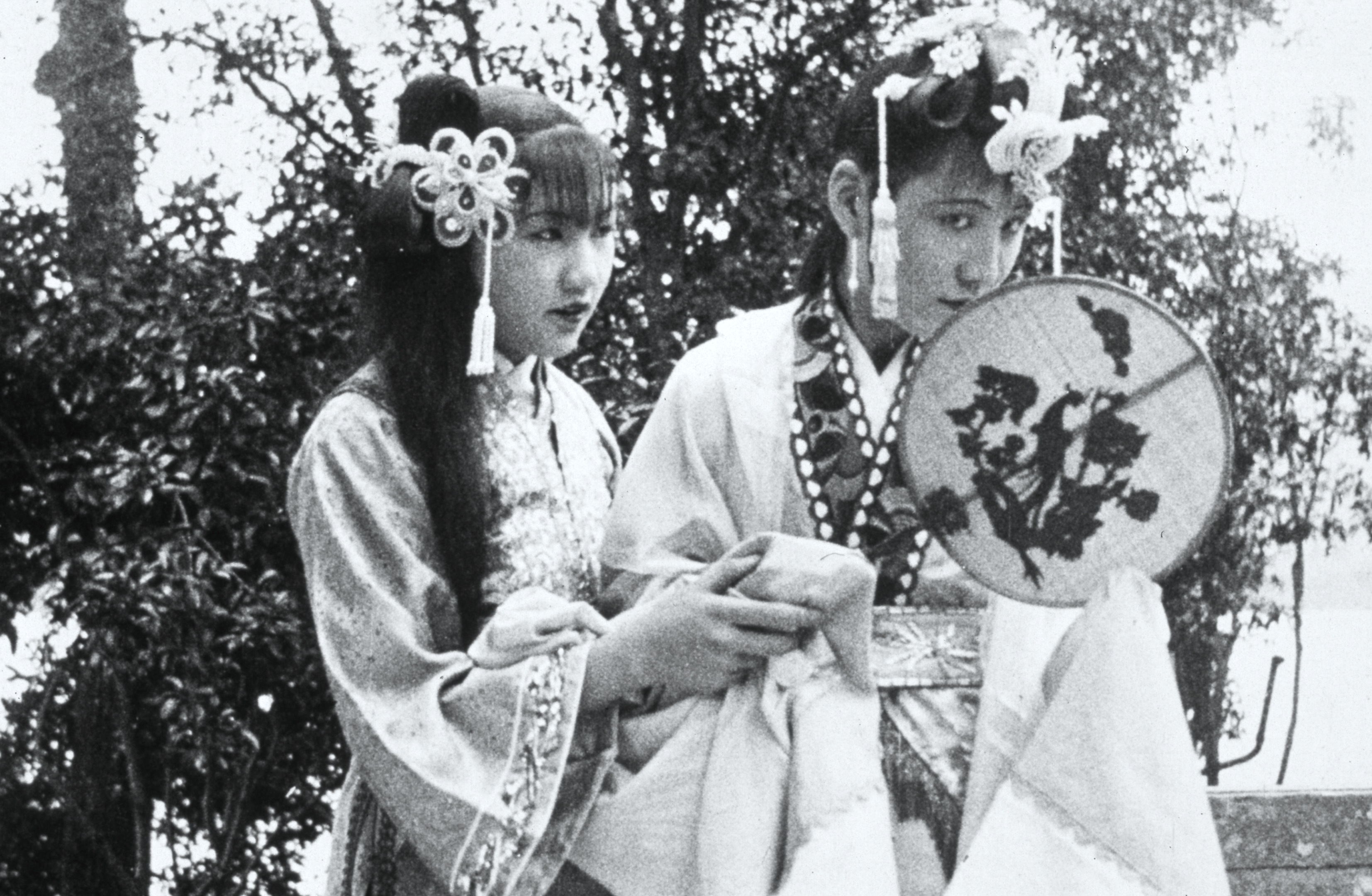 This time he's snared Mrs Wong, played by Lee Ya Ching (李霞卿 1912-98) who came from a prominent Cantonese family who supported Sun Yat-sen. They'd have personally known some of the 72 Martyrs killed by the Qing. From the age of 14, she was making movies,  part of the Cantonese clique  who helped set up the Shanghai film industry. Her film name was  Lee dan-dan (which means "little bomb")  a reference to her infant role in the Revolution of 1912). She played the maid to the heroine of The Romance of the West Chamber,  the seminal blockbuster based on the famous Chinese classic, made in 1927 by the Father of Chinese Cinema, Lee Man-wai (read more here).

Lee was a horsewoman and one of the first women aviators in China, though not the only one (look up Hilda Yen)  a stunt flier, who fell into San Francisco Bay and survived, and who raised funds for China during the Japanese War.  A meme of amazons runs through Chinese film and culture - women who shoot guns, ride horses, use whips and cross dress, often the spoiled daughters of warlords. Don't Change Your Husband was somewhat risqué in that Lee played an adulteress who gets divorced. Shortly after the film was made, Lee married a Chinese diplomat, educated at the Sorbonne, and lived with him in Geneva (League of Nations) but divorced him not long after.

In   Don't Change Your Husband , the wife demands a divorce so she can be with wastrel lover Chen. The two mothers face each other off, beautifully acted. The papers get signed in a lawyer's office, but the wife breaks down in tears. Then, as now, the lawyer grins, having made a handsome profit. Wastrel Chen wants ex Mrs Wong to smoke, drink and party around. There's a shockingly daring scene when she takes off her qi pao in front of him (and the camera) to put on a tarty new dress. But she isn't happy: she doesn't quite trust Chen. Meanwhile the ex is miserable, and looks lovingly at her wedding photo (where incidentally she's wearing a white veil, which is not traditional Chinese dress but a fashion adopted after Sun Yat Sen married Song Ching-ling in a western wedding gown).  This is a silent movie, so the actors don't articulate in words.  There's a long sequence in which Chi Ping smokes a pipe and looks morose. We guess his thoughts.

Now for some really spectacular scenes in the opulent mansion that is ex-Mrs Wong's family home. It's her father Mr Xie's birthday, and a huge party is being held - look at the lanterns, the feast, the acrobats, and the musicians, one of whom is a male singer, dressed as a woman, which was the norm then when women didn't go on stage. These are amazing sequences from an ethnographic point of view, utterly authentic because it was just as easy to use real musicians as to hire actors to play musicians.  Mrs Xie, knowing that her daughter is still pining for her ex, concocts a ruse to bring Wong to the party. Ex-Mrs Wong asks boyfriend to go, and he storms out of his home in a rage. Overwhelmed with grief she takes an overdose.

Amazingly Mr Xie doesn't know about the divorce because he's been away at his lumber mills way out in the interior. He blames his own wife for the mess. Mr Xie goes to Mr Wong to ask him to see the daughter "I'll never have that Chen for a son in law". Older Mrs Wong stands up for her rights, a character as pugnacious as Lee Ya -ching in real life. The families return to Wong's relatively humble villa. The two mother sit resolutely back to back. Mr Xie says sagely: "We. must forget the past, but hope they (the young couple) will come to an understanding with a bright future." When ex Mrs awakes, she's so upset that she runs to the river and tries to drown herself. We can tell by the shape of the sails on the junks that the river is somewhere near Shanghai. Mr Wong chases after her and holds her in his arms. "I know you are repentant. It makes me love you all the more."

Is this a simple melodrama? Clearly mother-in-law Wong doesn't forgive,  and Mr Xie's forbearance suggests he's a saint.  But this is a very well acted (and designed) movie which tells us as much about modern China and its changing values.  Enjoy the film below. You might also like The Orphan, HERE with different cast but also about the clash of modern and feudal values (also with fantastic visuals). Both with bilingual subtitles.