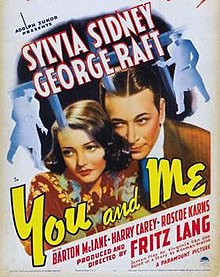 Kurt Weill collides with Fritz Lang and both come crashing down. It might have seemed a good idea in theory to pair the creator of brilliant films like Metropolis (more here) with the composer of The Rise and Fall of Mahagonny (more here)  in a film about capitalism and crime, but You and Me is a disaster flick, despite superb acting by George Raft and Sylvia Sidney. On the other hand, we can learn from mishaps like this, so it's worth looking at. If nothing else, it prepares us for the tragedy that is Weill.

The film begins with a song that should belong to Weimar cabaret, except that it's scored for Broadway camp.  We see a chic department store selling jewels., perfumes, cars and expensive toys, way beyond the dreams of those actually working on the shop floor. A metaphor for capitalist consumerism, if ever there was one.  But the song is pure ham.  The singer says "You have to buy" then mentions things that money can't buy, while the screen shows diplomas (which can be bought). Rhyming couplets, which work in German folk tradition, sound corny in English. Without the intellectual edge of Bertolt Brecht, Kurt Weill turns to tacky hack.

You and Me works, as a drama, because the plot, though implausible, is audacious. Mr Morris, who owns the department store, employs ex cons incognito, giving them a chance to go straight. No-one knows who they are. Helen (Sylvia Sidney) looks so pure and innocent that when Joe (George Raft) falls in love with her he tries to run away. But she loves him too and they marry. Helen tells the landlady that no-one must know they're married  because it's store policy, but Joe begins to twig that something's not right.  It turns out that they are both ex cons, and marriage would be a breach of probation. Joe's mates plan a heist, raiding Morris's department store. Helen tips Mr Morris off and then gives the men a long speech about the economics of crime. This is worth seeing! So the men stay straight. Joe, however, is livid that Helen lied to him, so this time, it's she who runs away, though she's preganat.  Many months later the ex cons track her down in hospital. This time Helen and Joe can have a real wedding, with howling baby for company.

You and Me has the makings of a very good film, but the attempt to bolt  on pseudo Weimar agitprop blows it off course. The song sequences aren't well written and don't integrate into the drama. There;'s political depth aplenty in this plot, but Weill's contribution dilutes the message, turning it into maudlin sentimentality.  The Rise and Fall of the City of  Mahagonny works because the songs are part of the story. The songs are pastiche, just like the cheap falseness of the city itself. The opera is supposed to sound like it's held together by ramshackle plasterboard. London audiences could not get past the opulent ROH setting enough to realize that that was part of the irony.
at June 12, 2015