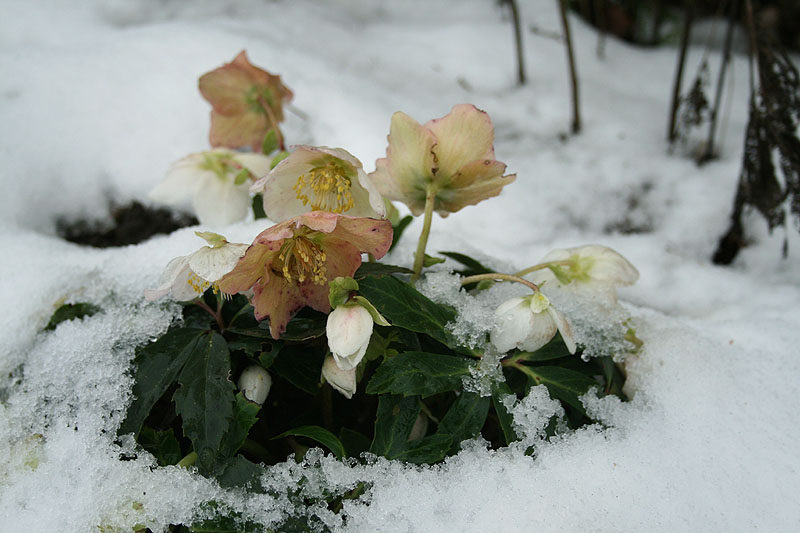 Auf eine Christblume : a poem by Eduard Mörike , set by Hugo Wolf at Percholdtsdorf in April 1888, encapsulates so much of the spirit of Mörike  that it's worth deep contemplation.  One evening in October 1841, Mörike  came across a rare bloom in a wintry graveyard, shining white and glorious in the gloom.  It was all the more miraculous to him because he had never seen such a flower before, especially in such a grim setting.  Being of an erudite bent like his friend the doctor/poet Justinius Kerner, he rushed home to check his botanical treatises and find out what the bloom was.  It was Helleborus Niger, the Christmas Rose, a flower of deep woods, rarely known in cultivation at the time. Here it was flowering out of season and out of context.  Mörike  put it in a glass just outside the window for he felt it needed to breathe out in the moonlight and in the free, open air.

Next morning he found that the wind had ravaged it and it was no more than a lieblisches Geist ( a lovely ghost)..The poem grows out of the botanical journal, referring to the plant's natural habitat hidden deep in the woods, and commenting on the wonder of finding it in a windswept cemetery.  It is lily-like and exotic, yet hardy enough to brave the grim winter barrenness. Then Mörike's characteristic curiosity - whose grave was it growing on? how was it planted? He then connects the mystery of finding the flower with the wider realms of magic and wonder. Deep in the woods he finds the image of the crystal-clear pool, a "Heimat zaubbereich" ( epicentre of magic). This "Kind des Mondes, nicht der Sonne", so unlike other ordinary plants; is ephemeral and spreads its invisble magic by a heavenly scent which seems to emanate from no less than the robes of the Blessed Virgin Mary. Mörike was a Lutheran pastor but he was known for his heterodox tolerance and married a Catholic.  Many of his poems show a fascination with the Virgin Mary, not necessarily in a purely theological context, as here where there's a strange juxtaposition of conventional piety  and pagan earth magic.

Mörike  enters a secret spirit world of elves and mystery. An elf, on his way to a wild midnight party, gazes in wonder at the glory of the mystical flower.  Then the poet makes another leap into transcendence. Now we are with the butterfly, another ephemeral being, hibernating in winter, waiting for spring, emerging from its chrysalis and flying bravely into the sun. It may never taste the wonder of the Christblumes's nectar, for by then the fragile flower will be no more.  Or will it? As Mörike says: Wer aber weiss? Perhaps, when the gaudy joys of summer are gone, and the butterfly too becomes a ghost, it might be drawn, in spirit, by the magical scent of the flower. This for me is a truly cosmic metaphor. A long ago commentator, von Weise, in his interpretation of this poem, says the mystery of all being is revealed in the image of this flower

As is typical of Mörike, there are metaphysical aspects to the poem. The flower emerges in the depths of winter, against all odds, braving darkness and freezing temperatures. The flower Mörike found was in an old graveyard, a cemetery so neglected that he couldn't figure out whose grave it was growing from. As a poet, he assumed that the grave may have been that of a young man or maiden,who died before their time, becoming immortalized, symbolically, in a fragile flower. In a sense that's a metaphor for all human life: a cycle of regeneration that never ends.

I originally wrote this piece nearly twenty years ago. Amazingly, it's lasted fine. I was then working on ancient archives in a very hot part of South China,  Exhausted, and with no music or poetry around me, I unexpectedly came across an early edition of Mörike's poems!  It was like a sudden flash of magic, so uncanny that it took me a while to realize it wasn't a dream.  Opening the book to the page with Auf eine Christblume with its crisp, frosty imagery was like a sudden, sharp shock. In steamy, subtropical South China no Christblume will ever grow, though we have frangipani instead, and other exotics like Michaelia Alba (pikake)  whose  minute, unseen  flowers  fill the air with heady perfume,. So much like the mystery of the Christblume.  Pondering on the last two stanzas, I reflected on the mystery of how things which don't seem to have anything in common can find a correspondence, even if its on another plane than surface reality.  Good old Mörike! Magic does happen.