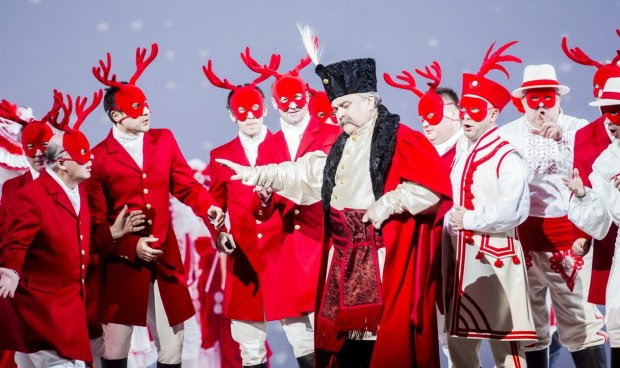 Stanisław Moniuszko's Verbum nobile (1861)  on BBC Radio 3 on Thursday, but even more fun, Monciuszko' Straszny dwór (The Haunted Manor)  in a wonderful new production from Opera Narodowa (Polish National Opera)  The production was very high profile, created to mark the 150th anniversary of the opera's premiere at Teatr Wielki, Warsaw, and the 50th anniversary of the rebuilding of the theatre, largely destroyed in the 1939-45 war. Fifty years ago, Poland was still part of the Soviet bloc, so the significance of the opera had to be played down for obvious reasons. Straszny dwór was written shortly after the suppression of  the January Uprising of 1863 against Tsarist rule. Its message wasn't lost on Poolish audiences, and it was promptly banned by Russian cenors. The manor is haunted, but who are the ghosts? In Straszny dwór an unspecified peace has been declared. Soldiers are returning home happily to their families but brothers Zbigniew (baritone) and Stefan (tenor) declare they won't let their swords rust: to stay battle ready, they won't even marry. In David Pountney's production, the brothers are seen with their comrades in an exuberant chorus line, which emphasizes the boys-only naivety of their vow. "Long live Bachelorhood!" they sing, hoping to live in isolation with their valet Maciej. But if aristocrats don't have heirs, there'd be no-one to keep the farm (or estate). The enemy might win by default.  Aristocrats who don't have heirs leave no-one to carry on their line. Aunt Cześnikowa  wants to marry them off.  They escape her by going to Kalimov, the manor in the forests, in the dead of winter. Aunt describes the haunted manor in lurid horror, but the music suggests that maybe the horror isn't quite what it seems. Zbigniew and Stefan aren't scared because the owner, Miecznik, owed their father debts: in a way, the manor is rightfully theirs. It's New Year's Eve, when women are supposed to be able to see their future husbands by vaguely occult means.  The lawyer Damazy wants to marry Miecznik's eldest daughter, Hanna, and thus presumably inherit the estate, but Miecznik wants his girls to marry real men, dressed in rugged Polish garb. Since Damazy dresses in ludicrously foppish "foreign" costumes, it's clear what he stands for. Kalinow is shown as an art museum, dominated by huge paintings, familiar to those who know 18th and 19th century Polish painting. To help those who don't, there are helpful labels in Polish, if you can read that.  Not that it really matters, because the subjects in the painting strike noble, classical poses like denizens of ancient antiquity sternly observing the proceedings below them. 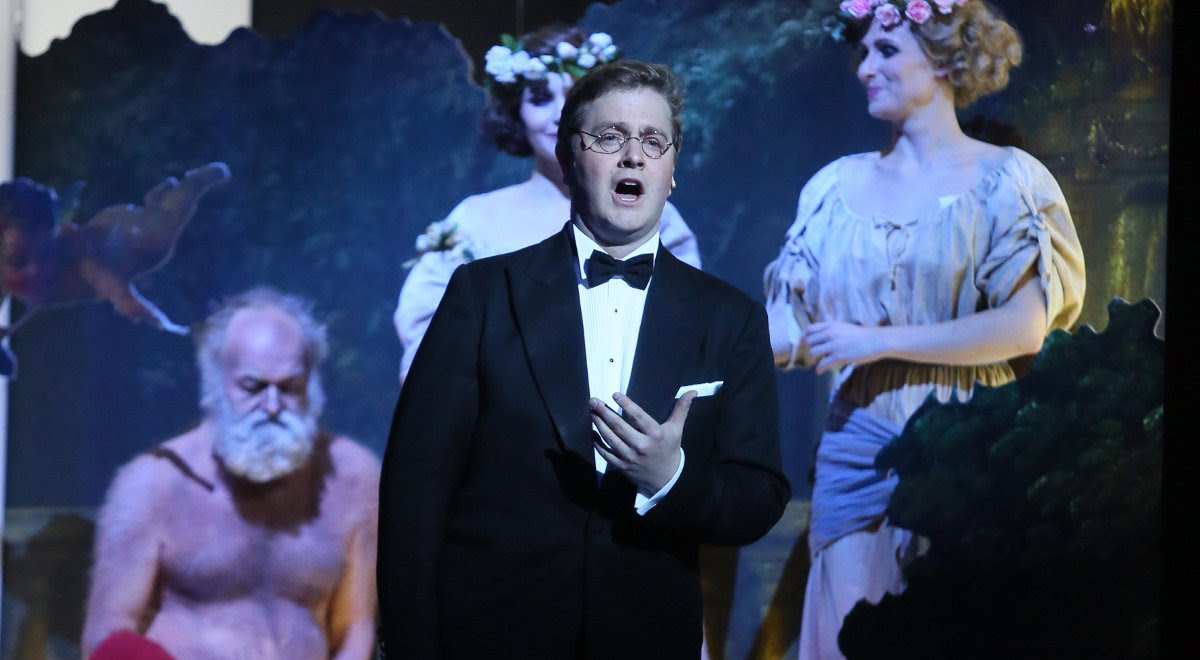 "Silence everywhere" sings Stefan, in a beautiful aria about moonlight which could come straight out of a Romantic dream. The manor clock, which has not struck for 1000 years, rings out a delicate melody of enchantment. It's a tune Stefan associates with his mother. In the middle of the night, Zbigniew and Stefan can't sleep,  envying their valet Maciej, who sleeps with a tear in his eye, though he snores so much, he makes the walls shake. It's not ghosts that are keeping them awake but the realization that they might be falling in love, and losing their delusions. They remember their parents, who shared their troubles and were stronger for being together than apart.  Another painting comes alive. Now Hanna and Jadwige (or their ancestors) sing together with Zbigniew and Stefan.

Politics aside, Straszny dwór is a deliciously funny opera, with cheery tunes and comic parts.  At dawn, Maciej  thinks the house is haunted, though it's  Damazy hiding in the clock. In a wildly camp vignette, Damazy tries to scare the brothers with a tale of cursed spirits. An ancestor steps out of  a painting. Have  Miecznik's ancestors come back to life. His daughters or Hanna and  Jadwiga have inherited their forebears' formidable personalities.  Pondering the brothers' ideas on being single, ancestress (or Hanna) sings "You don't know Polish women!". "A soldier's wife does not show fear", she sings, in a series of extreme trills ferocious and funny at the same time, "with a sign of the Cross, she prays for his victory'. To make the point further, the ladies in Kalinow are dressed in white, the footmen in red.

In the morning, Miecznik appears. Now we know why his title is "Swordbearer" though he didn't need to flourish his sword around before, when he was disguised as provincial gentry. The orchestra strikes up a proud mazurka , the chorus return, singing with confident glee. Pountney's set explodes in vivid colour. This staging is magical - darkness is driven away by bright light, dancers in red and white fill the stage,  Miecznik is revealed as a medieval Polish prince. Miecznik explains that his ancestor had so many lovely daughters that jealous neighbours spread the rumour.that the manor was haunted. History in a nutshell. But those who are brave defy the curse. Stefan marries Hanna and Zbigniew marries Jadwige. The manor is no longer haunted but restored to its rightful glory. Watch the opera HERE til 18 May.
Plenty of other related posts on similar subkjects, see lists at the right column. Szymanowski is my main man (I don;t write |Chopin)
at March 28, 2016