Sexploitation and stereotypes : Anna May Wong and Li Li-hua Is Anna May Wong a symbol of Chinese womanhood? To those in the west, perhaps. Her genius lay in her creation of a persona so stunningly original that she's stiill the defining icon of exotic beauty. Strikingly photogenic, she commanded the camera into submission. Modern supermodels look good because fashion stylists and photographers work on them. Anna May Wong was her own stylist, her art was her own image.  She has become an object of identity for many who look Chinese but whose connections with Chinese culture are minimal. In any environment where you're a minority, relating to others who might be like yourself is sensible human instinct.

Anna May Wong's persona was so compelling that the image has become self-fulfilling. Looks are a mirror on which other people project their own fantasies. instinctively channelling western fantasies. Instinctively, she knew her market, fuelling western stereotypes about the Orient. She was successful because in many ways she was more American than Chinese. She embodied the side of Grant Street where tourists thrill to the "Chinese experiece". Better that than being totally insular.  But looks are a mirror on which other people project what they want to see, not necessarily what's really inside.  Therein lies the danger.  Icons can replace reality, and sometimes that iconography can be poison.

Because she usually played herself in different costumes, Anna May Wong wasn't a great actress. Only occasionally do we get a glimpse of real feelings, such as when she flashes a look of contempt at actresses in yellowface who got better billing than she did. But that's what the public wanted, an inscrutable ouitsider. The word "alien" has sinister connotations.  Her roles rarely varied beyond fashinn-plate stylization: those eyes at once alluring and pointedly opaque. When she moved, she writhed like a snake, playing to the stereotype of Orientals (of hybrid type) whose temptations led to doom. In Piccadilly (1928), perhaps her most famous film, she plays an exotic dancer who hynoptises nightclub audiences but can't integrate into "civilized" society. The villain, of course, isn't society but an inscrutable Chinaman. In The Cheat (1915) Sessue Hayakawa played a sophisticate less dishonest than those around him, but paid the price for not being white. Read my piece on The Cheat HERE.

Piccadilly gets admired because it features an oriental in a central role, rather bthan a bit part, but it reinforces unpleasant negative stereotypes. Thus it's more offensive than The Cheat or DW Griffith's Broken Blossoms (1919) where white people play Chinese but the message is radically anti-racist. Read my piece on Broken Blossoms HERE. There were more Asians in Hollywood than most realize, but Anna May Wong's movies were a step backward, not forward.

And Asian cinema was full of Asians. Movies were made in China from around 1909. Shanghai, then the biggest city in the world, supported a huge film industry serving a mass audience. Because art was an integral part of modernization and education, Chinese movies usually carried social comment, many of a quality equal to anything in the west.  Chinese cinema featured women of all types, heroines and victims, and ordinary women living normal lives (as far as film can be normal). 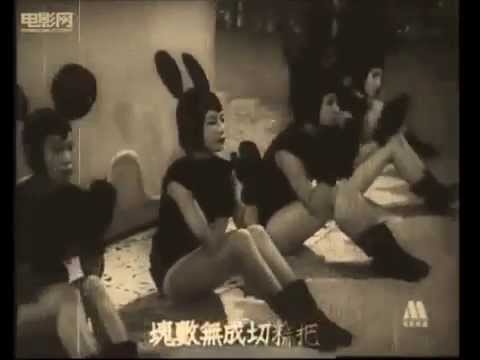 Below a clip from Colourful  万紫千红 (1943. The director was Fang Peilin. The star was the then 18 year old  Li Li Hua (李麗華) later a megastar for Shaw Brothers Studio. Here she plays a starstruck young girl, so desperate for the good life that she gets drawn into the world of Shanghai nightlife. There are many Chinese movies which satirize and reverse cultural stereotypes, including fantasies with exotic dancing femmes fatales, like Anna May Wong played. The photo above is a still from Colourful, showing a high kicking chorus line, the women dressed in traditional Chinese robes. Also a still from the same movie where the chorus girls are dressed as Mickey Mouse.

But this is enough for now.  Please explore the label "Chinese movies" in the list on the right - this site is one of the main sites in English about Chinese film.