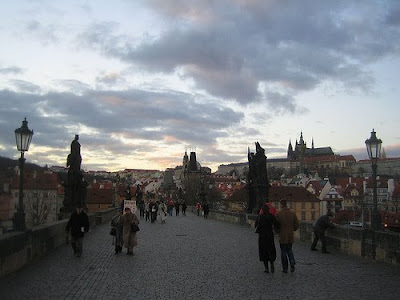 The Excursions of Mr Brouček has a reputation for being unexportable because of the references to Czech history and art circles in the composer's time. I once went to a study day led by Jan Smaczny, which elucidates the political background. Apparently it's a satire on music critics and politicians in Janáček's time. One of them went on to become Culture Minister when the communists came to power. Hence the ultra low profile given to Czechoslovakia's greatest composer by his own country until recent years ! But it's a universal satire - frauds, boors and opportunist cowards exist in every society, in all times. Brouček is pompous, but the name means "beetle" in Czech - the fellow is a crawler ! He's of course quite happy to betray his country but grabs the chance to take credit for the victory. Can you wonder why this opera wasn't "popular" ?

Last year I went to the semi staged production at the Barbican conducted by Jiří Bělohlávek. It was simple and elegant, changes wrought by changes of headgear, reminding us how easy it is to to fake things ! This was a magical performance, in Czech of course, a language sharp and pungent as percussion. Imagine an orchestra without percussion (including percussive effects on strings) – Janáček in English is emasculated. The singing, by regulars at Prague Opera, was excellent. This production was magic, reality blending into unreality, exactly what the plot is all about. Later that evening, I was driving through the long tunnel by the Barbican. The two principal singers were there. walking towards the Tube station, struggling to balance their suitcases with the huge bunches of flowers they'd been presented with at the end of the show. What a cosmic moment ! It was surreal - yet another “transformation” in a world where anything can happen.Luckily, the performance was recorded and is now available on CD. HIGHLY RECOMMENDED ! The version conducted by Frantisek Jílek is very good, too.
Here's a bit of description from the Barbican performance :

"Janáček was so determined that the opening overture should evoke the image of at nightfall that he climbed the highest tower in the city to observe the way the skies and the city transformed as dusk encroached. The short, hurried clusters of notes eventually melt into an expansive swathe of sound, gradually darkening in timbre. It’s like a panorama in a film, where details get gradually absorbed in a wider whole. Then Brouček is spirited away, even if it’s only a result of his being blind drunk....but Brouček is s Janáček’s own “Midsummers Night’s Dream” complete with Bottom in the form of Brouček. " "The first Excursion has Brouček transported to the Moon where people live on scents, not on food. Needless to say his obsession with alcohol, and “minced pig flesh stuffed in an intestine” disgusts the ultra-aesthetes on the moon. The land on the moon is supposed to be a veiled satire on cultural snobbery, but Brouček is such a boor that he’s hardly sympathetic. Maybe having Etherea fall in love with him is an indication of her bad taste, rather than just a reference to Titania. Janáček resolves the piece by ending with a “Dawn Duet” balancing the night music of the overture. Etherea is Malinka again, reunited with her lover Mazal, their music so beautiful it dazzles, driving the events of the night back into the shadows.

Janáček wrote the second excursion in a mood of patriotic fervour, so it’s more focussed than the first. Stumbling into a tunnel, Brouček wakes up in 1420 on the eve of the most important battle in Czech history. In an imaginative plot-within-a plot, the author of the original stage play adapted for this opera appears as an apparition. He says that the heroism of the past has been replaced by the stupidity and crassness Brouček symbolises. Janáček is signalling as loudly and clearly as he can, that he’s concurring with Svatopluk Čzech’s views on “modern” venality. Like the denizens of the Moon, the Hussite rebels may have their blind spots, but both accept strangers (and, by implication, new ideas). This was the crucial turning point in Czech history, and the rebels are prepared to die for their beliefs. Musically, this Excursion inhabits a different world to the first. It’s more strident and discordant, the pace more urgent, the undertones darker. Hussite hymns are incorporated into the blazing anthem Janáček writes for the chorus, amplified resoundingly by full orchestra. The choral writing is particularly interesting, because the style changes just as the solo parts transform"