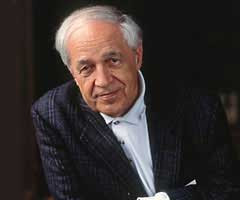 On Friday Pierre Boulez is conducting Janáček's Glagolitic Mass at the Proms. This will be a must as he hasn't officially recorded Janáček, but in the real world musicians do a lot more than what filters down the commercial system. His Janacek Sinfonietta is a wonder to behold, totally making a case for Janáček as a seriously original and ground breaking composer. Last year I was in Amsterdam to hear Boulez conduct From the House of the Dead. This isn't one of the cutesy operas like Cunning Vixen (which could I think benefit from a more incisive approach than it usually gets). In his last years, the composer was entering new territory musically. Who knows where he'd have gone had he lived longer ? Remember, Janáček was the guy who notated chickens in his yard and whose experiments with non western sounds in some ways lean closer to Bartók than Dvórak. Boulez's From the House of the Dead is a revelation! The director was Patrice Chéreau, with whom Boulez created the Wagner Ring that transformed Bayreuth a generation ago. Fantastic experience ! There's a link to the Amsterdam performance below. It's now out on DVD with extras, so GRAB IT.

Glagolitic Mass has always been a poser to me, because it's huge and sprawling, and that sort of thing tends to bring out extreme syrup from most conductors. But Boulez doesn't conduct music he hasn't thought carefully about, so I don't think he will serve up stodge.
at August 13, 2008

Yes, I'm looking forward to this, too, especially as Boulez can have a great relationship with the orchestra.

Boulez was principal conductor of BBCSO in the 60's and 70's.Of course many of them are retired now or have moved on, but Boulez conducts several times a year in London, and usually BBCSO or LSO (check ?) so his relationship is long lasting and well established. He's a "musician's musician".

Well, the earth moved for me all right. I didn't know, but apparently this was his last appearance as a conductor. What a way to go! And what a terrible shame we won't hear him do this sort of thing again.

At this evening's pre concert talk, he said he was conducting the keynote Messiaen concert on the actual centenary day, and I think there are things lined up for Carter, too.

Where did that strange rumour of Boulez's retirement come from?

As well as the London Messiaen concert in December mentioned above (Dec 10 Southbank) and the Elliott Carter 100th birthday concert at Southbank the next day, Boulez is conducting Mahler's 4th and Knaben Wunderhorn in Paris on November 3 with the Staatskapelle Berlin. And there are doubtless other things he has in mind. And he said last year in the Amsterdam programme note to his Janacek From the House of the Dead that he might, spelt MIGHT, consider conducting Sibelius when he reaches the age of 100. Only "might" because he doesn't find Sibelius "intriguing" the way he does Janacek. But I wouldn't be surprised if he is conducting something at 100.

What he has said fairly categorically (but who knows? )is that the won't conduct any more opera.