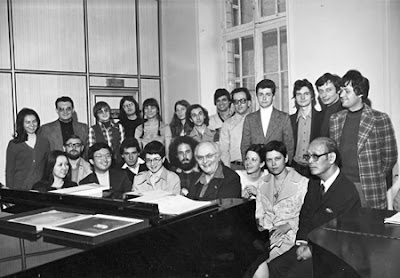 In the photo, George Benjamin is sitting with Olivier Messiaen. To Benjamin's right, is, I think Myung Whun Chung ! Benjamin was just 16. This Prom showcased Benjamin's Ringed by the Flat Horizon written just four years later. It was a smash hit when it was premiered at the Proms in 1980 - not many students achieve that kind of fame ! It's vivid, swooping chords, that disintegrate into sparkling chromatic showers, étincelante as they say in French. The Messiaen influence is obvious,and good. Benjamin is writing with images of lightning, filling space. So it was apposite hearing it after L'Ascension. This is very early Messiaen, indeed, still not quite fully formed. The orchestration is unusual, winds and brass alone then arching towards a muted ensemble of strings. It's quite experimental in its own way, but hasn't quite the magnificence of the version for solo organ we heard in Prom 6 played by Olivier Latry. I wonder how many noticed they were the same piece (almost) ?

After listening to Ringed by the flat Horizon, I listened again to Toru Takemitsu's Corona from 1973. Listen to Roger Woodward's recording and then to the Prom repeat broadcast (or to the recording conducted by Mark Elder) and compare. Both Takemitsu and Benjamin are writing pieces that evoke movement across planes/plains, both have images like rolling thunder, flashes of sudden illumination against darkness, but of course are totally independent pieces.

This Prom gave us early Messiaen and early Benjamin, hinting at what was to come. So it followed up with Early Ravel and later, the Pavane pour une Infante défunte first written in 1899 then orchestrated in 1910. Benjamin segued it straight into Bolero without a break to emphasize the progression. Bolero is so often heard played like a raucuous party piece : Benjamin instead understands what Ravel was really up to, working with blocks of sound - movement again, like a procession. Overfamiliarity makes us forget just how unusual Bolero is in musical terms. It takes a composer like Benjamin to help us "hear" it afresh.
at August 08, 2008

Well, it was my first time promming so I certainly did hear it afresh. It was a wonderful experience. Towards the end of the Bolero I was utterly intoxicated as the volume increased. I really enjoyed Ringed by the Flat Horizon, like being scared at the bang of a firework only to be wowed by the colourful crackles which follow.

Hearing "without prejudice" is so important ! And much more "real"> At Stockhausen there was a woman who had never heard classical music before except in TV ads. Yet she was having a wonderful time, making perceptive, comments. Then a "newspaper writer" next to her told her to shut up. Ironically, she understood more about Stockhausen than he did. He was the clueless one.