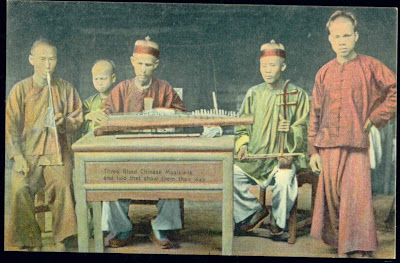 Here's a pic of a blind musician ensemble at the turn of the last century. The man on the table is playing a gu zheng (dulcimer) and the man in green is playing an erhu. The third musician is playing a zhao (end blown flute). These were the "folk" end of Chinese music, hired to play at private parties, teahouses etc. Scholars (middle class, educated) often played at home among friends, too, so Chinese music covered the whole social range. Itinerant musicians ranged from horrible to virtuoso. Some were legends in their time. When I was a teenager my pal and I tried to tape and interview the last of the beggar musicians. They freaked out, couldn't believe posh schoolkids were interested. But there are genuine academic recordings and studies. Prof. Bell Yung made a UNIQUE documentary about a blind singer/raconteur called "A Blind Singer's Story". It's based on hours of filmed interviews with one of the last teahouse musicians. It's on DVD, but impossible to get. What these guys did was improvise long extended songs, part known music, part written about the topics of the day. During the Japanese war, they were rounded up as subversives. Which they were, of course.

Chinese music most certainly isn't dead. There have been lots of new compositions, styles, improvements to instruments even the creation of a new genre, the large Chinese Orchestra. Rather like the explosion of music in 18th and 19th century Europe, only the demographic is many times greater. If only musicians and audiences in the west would cotton on to the fact that there's more to Chinese culture than takeaways, Mao suits and gangster movies.

Here is a video from The Virtual Instrument Museum hosted by Wesleyan University.

There is lots more on this site about Chinese music and opera. Just go the the list at the right of this blog and click on "Chinese music" Chinese opera" etc. and "unusual instruments"> PLease also let me know if there are more aspects you want to read about. There are so few sites for Chinese music written in English !
and here is an off the wall but informative site on OLD Chinese music recordings. Note though that there are many modern recordings and good ones, so these are of historical interest.
http://hajimaji.wordpress.com/2007/11/12/bai-ju-rong/
at August 28, 2008