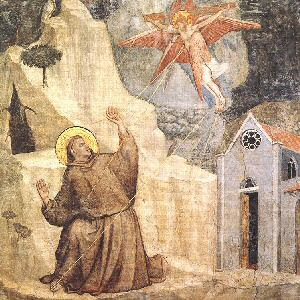 "Music is the perfect language for expressing ideas which can't be easily grasped", says Ingo Metzmacher. Metzmacher's whole career has focussed on how music, however new and unusual, expresses thought and feeling. His credentials are impeccable. Two years ago I met him at a reception. Everyone was fussing around Matthias Goerne, who was the star. Metzmacher was alone in a corner, unnoticed. "But you are a huge star, too" I asked. "That's OK", he replied, "It is the music that matters"

He conducted Messiaen's St Francis of Assisi in Amsterdam this year to great acclaim so Prom 70 will be special. It's six hours of mind blowingly glorious music (with intervals). But this isn't so much an opera in the usual sense."Yet that's the wonderful thing", says Metzmacher. "Messiaen is taking his time to explore ideas deeply. Nowadays life is so fast, and there's constant change around us. So Messiaen is like a wonderful harbour which gives us space to think." It doesn't really demand superhuman stamina from listeners. "Listen with open ears, open hearts and open minds" he adds. This music moves "like statues", he adds, which might not move themselves, but which move us as we contemplate them. "If you go into the countryside, into nature", he adds, "it's silent, and nothing much seems to happen, but there‘s a lot going on".