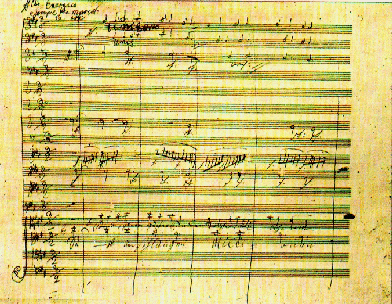 Genuine spooky Twilight Zone mystery! One day, while working in the UK's Public Record Office archives (now known as the National Archives) on a completely different subject, I keyed in the wrong file number on the computer. That's not easy as each subject has different codes, so this was really bizarre. If you believe in ghosts...... When the file appeared it was a file on Wilhelm Furtwängler!!! Dating from 1946, original documents, some never used in publication. Among the denazification papers and other official bits were hand written testimonies from ordinary people who had attended his concerts in the dark days of the war. "Never shall I forget", wrote one man, "When the conductor entered, the audience stood up as if they were one man....I had the definite impression that the audience felt itself at one with the man who had managed to resist the usual pressure coming from above, and express their gratitude that all was not lost." These audiences were not Party followers but "ordinary people for whom concerts were "Der Besucher zu einer Feierstünde" (untranslatable) that provided them an opportunity to lift themselves above the emptiness the Nazis had caused. Our wings were clipped. Yet music contains so much that cannot be contained or falsified. I can hardly believe that a Beethoven or a Mozart or a Haydn would have upheld party ideology".... At that time, he adds "A Furtwängler concert meant as much to me as a church service"

There is a famous film of Furtwängler conducting during the war. Of course it's propaganda - the actors in the audience had to look happy or they'd end up in some KZ. But real, cultured Germans knew their Schiller and Beethoven. They hardly needed reminding of Schiller's Enlightenment values, or Beethoven's opposition to Napoleon. "ALLE MENSCHEN WERDEN BRŰDER !" Loud and clear !!!! That was lost on most of the Party Hacks in the film, but not on Goebbels, who was educated enough to know. So even in the moment of his "triumph" over the conductor, he must have realized, deep down, that Furtwängler was having the last word.
at September 13, 2008