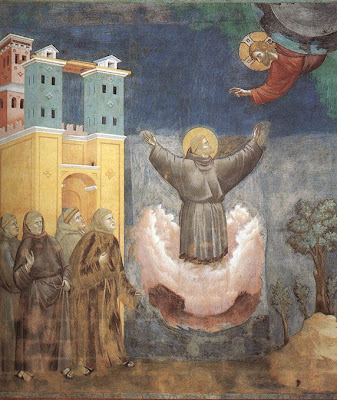 Metzmacher's Messiaen St Francis came straight from Amsterdam, in an acclaimed production by Pierre Audi. Last year at the Holland Festival, Audi and Patrice Chéreau were talking about how to stage opera intelligently, so it grows from of understanding the music and the way drama evolves from it. Artistic works seem to take on lives of their own : the better they are the more levels to be found. There is no such thing as simply following the notes. Even when you read a score, you're "interpreting" how the notes affect each other, where the music is heading. So good opera staging is not so different from good musicianship. Both are means of bringing out insights into what things mean and how they work.

Messiaen, being a highly visual person, gave detailed descriptions of h0w he "saw" St. Francis. Part of his inspiration came from the frescoes of Giotto. Notice how Giotto's painting are simple and direct, yet totally unnaturalistic. No perspective, flat planes, images flowing impossibly in space. But then the "story" with its Angel, stigmata and ascension isn't literal.

In Amsterdam, what Pierre Audi did was immerse himself in the music and how it works. So no fancy strobe lights and projections (as Messiaen wanted) but an almost empty stage with only some black wooden crosses, jumbled in a thicket : representing the thicket of confused emotions. One monk sings J'ai peur, J'ai peur, a theme that recurs throughout. As God tells Francis, committment is hard work. (Another reason why the opera is so long - it's a journey, like a pilgrimage, not to be rushed. This is not music for quick-fix ! The black thicket of crosses also represents the life of the monks, simple, harsh and spartan. This also reflects the way the vocal parts are written in relation to the orchestral. The monk's lines are regular up and down cadences, like chanting, and never far from conversational tone. Monks don't do flamboyant : arias would be all wrong. Like the black crosses, their simplicity stands out against the mind bending panorama of colour that's in the music.

That's why Audi has the orchestra seated in on the stage occupying nearly all the space. Because
this is orchestral music of breathtaking beauty, in which voices play a part, not the other way round. At the back, the choir stands on stage, also fully visible. Messiaen wanted them hidden, but how do you hide 200 people ? In any case having them on stage adds to the overwhelming impact because they and the orchestra dwarf the singers. It also means that the Angel can materialise out of the choir, from high above the platform.

Messiaen also wanted the climatic section in which God appears to Francis, and the choir sings C'est moi ! C'est moi ! (same them as J'ai peur, they connect).to be staged with a huge cross rotating in different directions to blitz the audience. But listen to the music and it's all there anyway, multi-layered and multi-tempi'd, sounds flying off in different directions, seeking out the darkest corners opf the performance space. It's mind bendingly wonderful musical writing, so Audi didn't cover it. With 120 musicians on stage there's also plenty of shiny brass for lights to pick out.

Messiaen specifies that the Leper is covered in black and yellow pustules. So Audi shrouds him in a casing of Police Do Not Cross tape - he's dangerous, and everyone's scared to go near, including Francis. Perfectly symbolic, and it breaks open instantly, the moment he's cured, so he's instantly pure and clean - not easy to do with normal costumes.

Then the sermon to the birds. How do you get hundreds of birds into an opera house ? As Audi says, what do the birds represent ? Birds, said Messiaen, are fragile but they outlived the dinosaurs. Observe their ways and their songs, says St Francis, they don't communicate through words. So Audi uses colourfully dressed children who dart about/listen - visually lively and refreshing. A more minimalist setting might have worked too, but audiences do need a spritzer of colour that isn't only in the music. In fact the musical writing in this scene is so overwhelmingly gorgeous it is almost too much to take in neat.

Audi proves that opera staging doesn't have to be hidebound : it doesn't matter "what" a director does, as long as it's astute musically and dramatically. His Ring cycle for Amsterdam was astounding. Get the DVDs, especially if yoiu think you "know" The Ring. Siegfried is particularly good. The Holland Festival is brilliant - lots of different things, generally very high quality. What a buzz it must be to be part of it !
at September 10, 2008