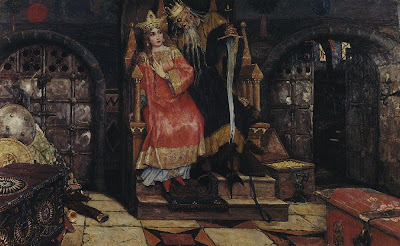 Kashchey is a gnarled old ogre who imprisons a beautiful young princess in his gloomy underworld. It’s classic psychodrama. Kashchey has supernatural powers, so how can the Princess be saved ? This Prom paired Rimsky-Korsakov’s Kashchey The Immortal with Stravinsky’s The Firebird, contrasting two resolutions to the fairy tale that’s captured Russian imaginations for centuries.

Rimsky-Korsakov’s short opera focuses on multiple relationships. Kashchey is immortal, but he has a daughter, Kashcheyevna, who holds the secret to his death. She’s just as cold and conniving as he is but she falls in love with the Prince. The Storm Knight brings all four of them together, and the Princess’s love triumphs. Kashcheyevna weeps, and her tears break the spell that makes Kashchey invincible. Love conquers all, yet again. It’s simple but affords opportunities for lushly Romantic musical effects. Music as pictorial as this illustrates so well that meaning can be visualized even if you don’t speak Russian. Kashchey’s music is shrilly angular, evoking his harsh personality as well as the traditional way he’s portrayed, as a skeleton, the symbol of death who cannot actually die. The Storm Knight is defined by the wild ostinatos that accompany him, even though he’s more of a plot device than a character. Some of the most inventive music, though, surrounds Kashcheyvna. When she sings, there are echoes of Kundry, or even Brünnhilde. Harps and woodwinds seem to caress her voice, so when her iciness melts, we sympathize. While the other roles verge on stereotypes, this role is more complex, and Manistina impressed.