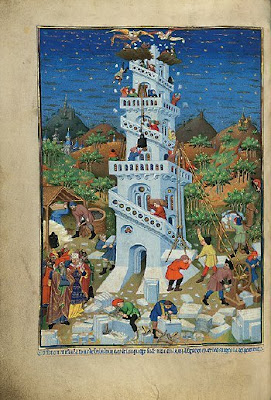 All this ornate, richly coloured music we've been listening to lately reminded me of Julian Anderson's Book of Hours. It’s inspired by the Trés riches heures du Duc de Berry, illuminated painstakingly by hand and gilded with real gold. That rather describes Anderson’s technique, too. Not one slipped note, everything intensely coloured, and enhanced by electronic effects applied at first like fine gold leaf over rich painting. The first part is an intricate tracery built around four basic notes. Its exotic textures are interrupted two-thirds of the way through by a strange electronic interlude. It’s not pre recorded but live. Then a Luftpause to create distance from what has gone before, the second part opens with deliberate distortion – people who listen to "surface sound" will get a shock! It’s based on a scratched LP, a reminder perhaps that recorded music is artificial and ephemeral. Then the distortion clears and the music reveals itself again, reborn. Towards the end there’s an apocalyptic electronic cadenza, which fits in with basic ideas in medieval cosmology, such as "the world overturn’d". In other words, fate, sudden upheaval, etc, ideas which are strikingly modern. Of course you don’t need to know any of this to enjoy the music, but Anderson is far too literate a composer not to be aware of this extra dimension. It adds a deeper resonance, linking the Book of Hours to, say, Adès’ America. That's why i've added the pic of the Tower of Babel, which as we know collapsed. For all the beauty of medieval manuscripts, the world of the Middle Ages was a savage place, ripped apart by war and pestilence. Mayhem was never far from the surface and death lurked in every corner. Not pretty. Anderson's music has this sharp, ironic edge which gives it power.

Here's  the big review which like a medieval box, opens up yet another link to another Julian Anderson recording, Alhambra Fantasy inspired by Islamic mosaics. Tiny jewel-like fragments, glowing together.Amazon has them HERE