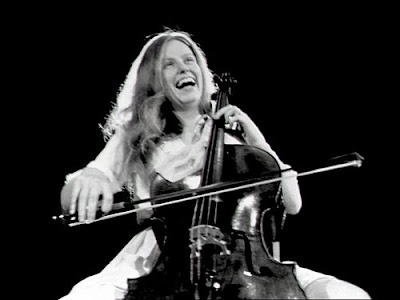 This time, next Friday evening, on BBC4, Jackie Du Pré will light up our screens again. Jacqueline du Pré in Portrait opens a season of Films by Christopher Nupen, which starts on 26th September. A great reason for staying in Friday evenings !

The Jackie du Pré film was revolutionary. Up til then, filmed music was a stiff, formal affair. Then, suddenly, along comes this vivacious young woman who plays pizzicato on a train, humming a tune cheerfully. The starched suits hated it, but thousands of people came to classical music after seeing how exhilarating music can be. Jackie's enthusiasm and generous spirit adds a whole new dimension to the experience of music making, and to listening. Film captures, like no other medium, the "whole personality". Jackie is immortal through these films. She continues to move, inspire and illuminate.

Because the Nupen films are being shown together as a group, it deepens their impact. All theses films deal with the idea of performer as creative and human. What makes a person become an artist ? How do they develop their unique gift ? What goes into a performance ? With each film, different aspects emerge. The films on Nathan Milstein (to be shown 31 Oct and 7 Nov) are exceptional. Milstein was a virtuoso who eschewed popular success and didn't want to be filmed. Nupen teased him. " I have a film of Paganini." "What !" says Milstein. Then he, too, realized how film could preserve aspects of performance mere audio can never fully capture.

Make a special effort to watch the Jacqueline du Pré film if you possibly can as it's a classic and a masterpiece. But if you do miss it, get the DVD. But most of all, tell other people, especially those who they think they don't like classical music. It could change their lives.

http://www.allegrofilms.com/home/
For details of the TV series, and info on the films.
Photo of Jackie's big, whole hearted laugh courtesy of Allegro Films.
at September 19, 2008