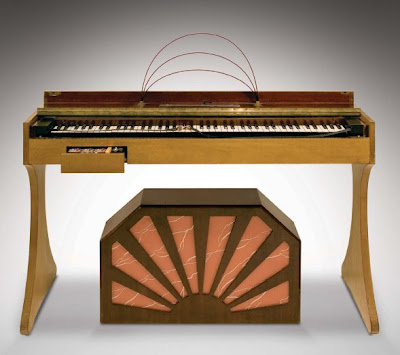 Everyone knows the Ondes Martenot from Bela Lugosi movies. One of the reasons Messiaen's Turangalila puts people off is the Hollywood connotations. The instrument is bizarre, but it's unique in that it uses sound waves and oscillations : an instrument that could not have been conceived before modern technology. Sound out of "empty" space ! No wonder it excited Varèse, Jolivet, Milhaud and even Maurice Ravel who went to Ondes Martenot concerts. It symbolised all that was modern, opening new possibilties.

This was an instrument made in heaven for Messiaen. It expresses his other worldly visions, exotic, and elusive. Yet it's not dreamy. Played well, it's assertive. There's a perfume called Parfum de Therese which is sensual but has a kick of pepper. Like perfume, the Ondes Martenot floats in the air, ever changing, making us actively "follow the scent". Turangalila may sound dated if we think of it solely in terms of Hollywood. Yet in 1946, Hollywood did symbolize exotic, optimistic dreams - especially after the privations of war in Europe. But "Bad taste" is a western, middle class constraint. Lose hangups, says Messiaen, and be liberated. Enjoy without guilt or being judgemental, God is in all things, however odd.

Make a point of listening to the broadcast of Prom 64 Rattle conducting the Berlin Philharmoniker. Amazing, the best Prom so far and probably Concert of The Year. And I know Messiaen pretty well. This convinced me at last about the Ondes Martenot. Tristan Murail played the part on Rattle's ancient recording but this was completely on another plane. What's good about the broadcast too, is that there's a talk on the instrument by another famous player, Thomas Bloch. The instrument is live, well and thriving ! He mentions Fred Frith , my hero, one of the best improvised music guys around.

There's a lot on Youtube about the Ondes Martenot, including a very long demonstration of playing technique. But also search on Turangalila desarollo. It's an animation using paintings of the 1920's and it's genuinely creative and original.
at September 03, 2008

I don't feel so sure about the Bela Lugosi/ Hollywood connection. It was the Theremin that was in vogue with Hollywood composers- a famous example being Bernard Herrmann's score to The Day The Earth Stood Still.

However, the Ondes Martenot was used by Arthur Honegger in his film scores, and used extensively by Charles Koechlin.