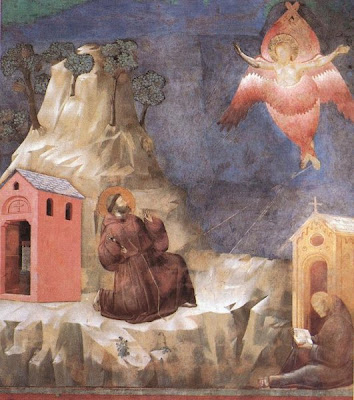 The first two full reviews of St Francis of Assisi, Messiaen's masterpiece, Prom 70. Mark's is on boulezian, see link on right and mine is here

St Francis of is radically different from conventional opera, but that’s exactly why it’s exciting. This performance was so good that its 5 hours flew past in a blaze.

Metzmacher conducted this cast and choir in in June. In the staged production, by Pierre Audi, the orchestra was fully visible. The set was minimal, just a tangle of black crosses. This illustrates how the opera “works”. It’s orchestral music with voices, rather than the other way round. The monks sing in regular cadences, like chants, rarely far from conversational mode. Their lives are spartan, but around them, the orchestra creates glorious panoramas of light and colour. Like the monks, we can’t see Heaven, but can hear it in the music, and it’s all around, infusing the opera with exuberant spirit. Even by Messiaen’s standards, the orchestration is inventive, with unusual instruments and techniques, so the sounds are elusive, making you listen more acutely, which is, perhaps the message of the whole piece. There are three ondes Martenot, using the natural oscillation of sound waves to create music out of “empty” space. The Angel, too, materialises out of thin air. “Tu parles à Dieu en musique”, it sings, you speak with god through music. ”Entends la musique de l’invisible”. The orchestra played the Angel’s Viol music with such gossamer delicacy that it seemed to float, in an unworldly plane. Concepts too difficult to grasp rationally can be expressed obliquely through music. That’s why Francis tells the monks to study birds. They speak without words.

God himself speaks through the massed choir, in the mystical scene where Francis receives the stigmata. It’s a magnificent, multi-layered piece that’s very difficult to carry off, as Messiaen wanted to create the effect of light and sound flying forth in different directions and at different speeds, but Metzmacher achieved it, combining precise discipline with ecstatic, exuberant timbre. Moments like this show how much Stockhausen earned from Messiaen in terms of celestial vision, and the idea of sound moving through space.

Heidi Grant Murphy was the shimmering voiced Angel, and Rodney Gilfry sang St Francis. He sings for about 3 hours, and over a wide range, hovering like an interface between the monks’s cadences and the ecstasy in the orchestra. It’s heroic. This will be one of the high points of his career. Hubert Delamboye’s Leper was sung with vivid dissonance, suddenly soothed when Francis cures him with a kiss. The 200 strong choir were very well-prepared, singing extremely complex parts with perfect precision. Full honours, though, to Metzmacher and the Hague Philharmonic for vibrant playing that brought out the translucent glories in this highly original music.

There weren't many people at this Prom but those who were there were dedicated, Several curtain calls, as if going home might break the spell
at September 09, 2008