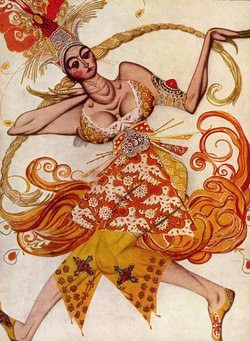 Stravinsky’s The Firebird, written a mere 4 years after Kashchey The Immortal, inhabits an altogether different plane. While Rimsky-Korsakov’s music embellishes the vocal line, Stravinsky’s floats free. It “is” the drama. The ballet evolves from the music rather than the other way round. Music for dance has to respect certain restraints, so it’s necessarily quite episodic, but Stravinsky integrates the 21 segments so seamlessly that the piece has lived on, immortal, as an orchestral masterpiece. Vladimir Jurowski is still only in his mid 30s but has established a reputation for intelligence and sensitivity. Watching him conduct this piece was instructive : he moves with the grace of someone who understands how this music connects to dance. His gestures were understated, yet elegant, his left hand fluttering to restrain the sweep of the strings and keep the tone transparent. This pinpointed how Stravinky wrote cues for physical movement into the music itself. Circular woodwind figures translate into pirouettes, flurries of pizzicato into rapid en pointe. Dancers must hear levels in this music closed to the rest of us, but Jurowski’s intuitive approach helps us appreciate its depths.

The Firebird is a magical figure which materializes out of the air, leading the Prince to Kashchey’s secret garden. Unlike the ogre, the Prince is kind and sets the bird free. He’s rewarded with a magic feather. This time the Princess and other captives are liberated by altruistic love. It’s purer and more esoteric, and Stravinsky’s music is altogether more abstract, imaginative and inventive. Jurowski gets great refinement from the London Philharmonic Orchestra, with whom he’s forged a very close relationship in only a year of being their Principal Conductor. The solo part for horn, for example, plays a role in the music like that of a solo dancer. Textures around it need to be clean as they were here, so its beauty is revealed with poignant dignity. The rest of the orchestra plays barely above the point of audibility, until the flute enters carrying the horn’s melody. Later there’s more magic, when the double basses and cellos are plucked quietly, building up towards the crescendos which sound for all the world like the joyous tolling of great bells. In the finale, trombones and trumpets hail the moment of liberation. The trumpeters stand upright, so their music soars above the orchestra, projected into the auditorium with superb, dramatic effect.


The picture above is Léon Bakst's design for the Firebird in Fokine's production of the ballet in 1910. Please see the full review at