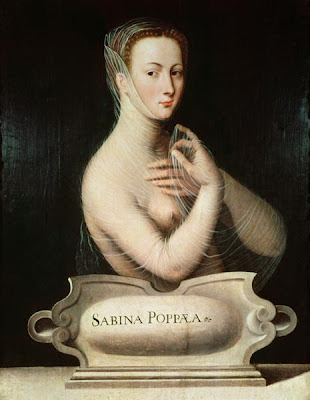 The BBC Proms bring Glyndebourne to each year, so those who can’t make the trek to can enjoy the experience. This production of L’Incoronazione di Poppaea was a brilliant choice as it translated perfectly to the configurations of the Royal Albert Hall. If anything the opera was enhanced by the minimalist setting, which threw focus on the stark clarity of the plot and music. The final scene is breathtaking. Poppaea walks in triumph, trailing an enormous red cape. It’s been there all along in the background, draped over the choir stalls, reminding us that Poppaea is a “scarlet woman” at once sensual and malevolent. Now as she walks to face the audience, the whole stage is filled with violent red velvet. She’s “crowned” indeed, but it’s macabre : she and Nero, and , will end up badly. This finale was a magnificent coup de théâtre, achieved by simple means.

In his own time, Monteverdi was cutting edge and audacious. Monteverdi allows performers much freedom, but it’s a freedom earned through respect for the composer’s idiom. Emmanuelle Haïm’s lucid conducting animated the music, bringing out the sparkle in the spare textures. Individual soloists were clearly heard : no waffle in this ensemble. No wonder Monteverdi is such an influence on modern composers like Luigi Nono. The Orchestra of the Age of Enlightenment made the music move. On a hot summer evening, four hours in the Royal Albert Hall packed to the rafters can be hell, but this playing was crisp and refreshing. Instruments like harpsichord and baroque flutes don’t lend themselves to vast auditoria, so all credit is due to the BBC’s sensitive sound engineers. Recently I was talking to a European radio engineer who explained in extensive technical terms why the BBC teams are highly respected in the business. Now I understand why.

The spoken prelude was lost in the throng of the arena, but in a way, that enhanced the essential theatricality of baroque opera. It’s not verité, but a lively mix of concrete and abstract characters like Cupid who intervene as the action unfolds. Artifice and “reality” entwine. Much of the plot revolves around appearances and counter-appearances, so secondary themes like cross-dressing and mistaken identity are important. Perhaps part of the appeal of castrati was because they were not naturalistic, and a source of wonder. They’re not an option these days, but fortunately we have singers like Alice Coote, who can create Nero as a believable character even though we know she’s a woman. She’s unique because there are few female singers who can provide the equivalent of the countertenor fach in male voice. She carries it off because she’s a convincing actor, as well as having an unusually dark timbre. Coote’s Nero is sexy, notwithstanding he’s Emperor and will kill you if he can’t get his way. It’s quite an achievement, as she looks and sounds like a woman, yet Poppaea is obsessed. Danielle de Niese’s Poppaea was stunningly glamorous – she’s a born diva, who can carry off the part by sheer personality, though in some of her longer arias she demonstrated she could sing just as effectively minus the visual impact.

So much of the action in the plot depends on quick, almost slapstick changes of identity. It’s part of the arch frisson that makes baroque so lively. Iestyn Davies in a silk slip would fool no one in real life, but in opera, everyone’s in on the joke, and knows Otho’s murderous plans will come to nothing, unlike Poppaea’s which are much more sophisticated. The double entendre is rather more forced when a deep male voice emits from Wolfgang Ablinger-Speerhacke’s Amalta, but identity and gender games are part of the moral ambiguity that is the heart of this opera, where the “bad guys” seem to win, at least for the moment. This performance was bright and vivacious, but it had a powerful sting in its tail.

Thanks so much ! I read your blog and the link is up !

This is a great blog, great information!