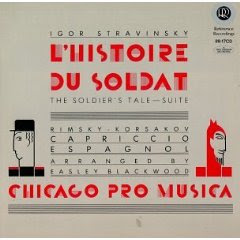 Because L’Histoire du Soldat contains spoken words, it’s easy to assume that a conventional reading will suffice. Hence some of the elaborate performances which attempt to inject exaggerated “realism” into the words, overwhelming the music. Yet the music is paramount, the spoken parts mimicking its rhythms, not the other way round. This is music, above all. The words serve the musical line, like a new kind of instrument. Most actors aren’t musically acute enough to appreciate this, which is why performances without the vocal parts are valid, and so often far more successful as a result. As Patrice Chéreau said on the BBC broadcast, this is “pure theatre”, artifice, not naturalism, we don’t need to be lulled by false realism. Parallels with The Rake’s Progress are apt. In both, men make pacts with the Devil. Stravinsky deliberately uses spartan forms, so the stark moral dilemmas are not softened or compromised.

Chéreau famously helped Boulez create the seminal Ring decades ago, which might have earned him easy laurels solely in opera. Instead, he made his career in theatre. Then, last year, he and Boulez created a remarkable new approach to Janáček in a new production of From The House of the Dead. For an actor, Chéreau is unusually “musical”, perhaps because his work isn’t mainstream theatre but sensitive to wider influences. If anyone could do justice to L’Histoire, it would be someone like Chéreau, who understands how words and music integrate. He got exactly the right balance. By holding the script in his hands, even though he was clearly reciting from memory, he gave visual expression of Stravinsky’s concept of theatre/music as art, not faux reality. It’s also a reference to the mysterious book in the text which the devil gave the soldier (who didn’t read it).

Chéreau narrated all three “parts”, the soldier, the devil and the narrator. The princess is represented, silently, by a ballerina in some performances. This is perceptive, as the parts aren’t “characters” as such but symbolic. Chéreau’s delivery was perfect, pungent and pointed. He was earthy enough to convey the “sense” of the peasant soldier, reinforcing the way Stravinsky writes into this music echoes of a raucous village band. The angular, quirky rhythms turn the steady trudge of footsteps into a bizarre, macabre dance of death. Chéreau is so attuned to the musical logic that his spoken lines take on the same, jerky staccato. These are not verité rhythms of speech., but presenting this in any language other than French spoils the cadences. In non-vocal performances, the violin part is predominant, for many reasons. The devil, for example is often portrayed as a fiddler. This violinist was excellent – no surprise then to find it was Guy Braunstein, concertmaster of the Berlin Philharmoniker, no less. Barenboim brought out the internal relationships well, violin and voice, bassoon and clarinet, violin and double bass. The programme notes translate L’Histoire as “March” but it’s a manic, sardonic dance as well, so these inner relationships do count. They are not unisons so much as tense little duels, like the card game in the story (and in The Rake’s Progress!).

I went to this Prom for Chéreau, for he is a huge draw and rarely heard. The ensemble comprised members of the West-Eastern Divan Orchestra, conducted by Daniel Barenboim. This is an extremely good orchestra, far better than the label “youth orchestra” might imply. If anything, the circumstances in which they work together intensify the commitment of their playing. It’s full spirited, yet well integrated : these musicians really know why it’s important to listen to each other, even if they don’t agree. In a small ensemble these values come through even more strongly. The most accomplished players here naturally shone, but all pulled together. At one point during L’Histoire, the percussionist instinctively started to dance. It showed how completely “involved” he was. I loved it.

Boulez’s Mémoriale (…explosante-fixe originel) is demanding but came over well because the ensemble understood how its muted dignity comes about through relationships, not star turns, even though the flute part is exquisite. Boulez was as young as these musicians when he met Stravinsky. The two composers hit it off immediately. There are accounts of them sitting together deep in earnest conversation. What might have happened had their friendship developed ? We’ll never know, but Mémoriale is a sincere and very moving tribute to Stravinsky, and, in this revision, also to a flautist prominent in IRCAM. This background is worth bearing in mind as there was an invisible thread in this Prom. Just as Boulez learned from Stravinsky, Boulez, Barenboim and Chéreau (and Braunstein), have worked together for years, and the West-Eastern Divan Orchestra has significance in human as well as music terms. After Mémoriale, Boulez briskly bounced onto the platform, shaking Guy Eshed’s hand warmly. The flautist’s face lit up. It wasn’t a moment he will easily forget.

(Hope this desn't turn up twice; the first disappeared, somehow.)

And I just saw this from the Guardian: the L'histoire d'un soldat "was chiefly unsuccessful because it was narrated in French." (My italics)

That, like you, I thought was tremendously successful. I despair.

What can you expect from the Guardian these days ? thast reviewer also thinks it should be narrated by a soprano.