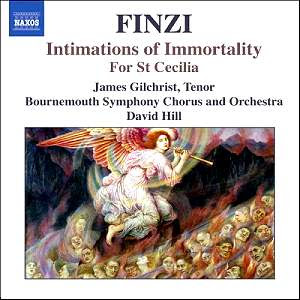 Super performance today by James Gilchrist of Schubert's Die Schöne Müllerin. I rushed home to listen to another DSM but couldn't resist pulling up one of the best Gilchrist recordings, Gerald Finzi's Intimations of Immortality. There are many good recordings of Finzi’s masterpiece Dies Natalis op. 8 but relatively few of Intimations of Immortality op. 29. Only two recordings are readily available, one with Philip Langridge (Hickox, Royal Liverpool Philharmonic, 1988) and another with John Mark Ainsley (Best, Corydon Orchestra and chorus, 1996). The surprise is that this new recording is so good it exceeds even the high standards of its predecessors. This is the one to get, on nearly every count.
Intimations is a blockbuster, a spectacular on a massive scale. As Finzi himself joked, it was a “hell of a noise, but rather a wonderful noise all told”. It certainly is ambitious, requiring a large orchestra, a well trained big chorus and a tenor with the fortitude to sustain 45 minutes of singing against a loud background. Finzi attempts to match the grand, stirring verse of Wordsworth with an equally expansive orchestral setting. For a composer whose strength was in smaller scale chamber and choral music and song, it is quite an achievement: in some ways it outdoes Vaughan Williams in dramatic effects. Nonetheless, its very sprawling ambitiousness, and the rush with which it was completed for first performance in 1950 poses problems. This means all the more that it needs to be performed with clear vision.

As with Dies Natalis, Intimations starts with an Andante setting out the main themes to come: the horn solo is particularly evocative, with its echoes of Arcadia. Then Gilchrist enters, pure and clear. Gilchrist’s voice is remarkably beautiful, pure and clear. Ainsley brings a highly refined, magical quality to his singing: this baroque sensibility brings out a deeply spiritual level to the text, which is utterly appropriate and will remain a favourite of mine. But Gilchrist has a more direct, almost conversational edge which expresses profound conviction. His phrasing is immaculate, his diction so clear that Wordsworth’s difficult long sentences come across with a natural ease and flow. Wisely, the recording keeps his voice in the foreground. Langridge’s more straightforward singing is more recessed into the whole, which doesn’t help, since the soloist’s role is so important.

David Hill has been conducting Finzi for years, and with the Bournemouth Symphony Orchestra and chorus, he has fine musicians to work with. The results show in by far the most animated, vivacious playing of all three recordings. One of the critical points for me is the xylophone solo which dominates the fourth stanza. Stephen Banfield, one of the great Finzi commentators, calls it, charitably, “ragtime”, though what place ragtime has in Wordsworth, I don’t know. Of course it’s cheerful, but in the Best/Corydon recording in particular it reminds me far too much of “The Donkey Serenade”, a concept totally jarring to the ideas in Wordsworth and the general thrust of the music, and spoils the recording. Hickox may not mute its effect, but doesn’t overemphasize it, either. Hill thoughtfully tones it down and keeps it more integrated with the rest of the orchestra and the choir, so it does not jar quite so much. Indeed, he gets from his players a clarity and liveliness that complements Gilchrist’s expressive singing. This is one of the strengths of this recording, as balancing the constituent parts of the piece make it flow with more spirit and feeling. What Finzi may have been seeking, after all, was a profound emotional charge, so as to equal Wordsworth’s intense poetry. While the Langridge/Hickox recording has its merits, it’s far more conservative and unadventurous. It doesn’t capture the sense of wonder and excitement that Finzi’s spectacular setting seems to cry out for.

Indeed, what strikes me about his setting is its “technicolor” elements: great surges of volume, intense chromatics, lushly romantic voices and strings in particular. It’s not surprising that the Hollywood musician Bernard Herrmann was one of the first to appreciate the work for what it was. Hollywood may have bad connotations in conservative eyes, but in those dark days of post-war austerity, it meant something quite different. If Finzi sought the ebullient and the upbeat, it seems quite natural that he should have written music whose boundless optimism transcended parochial convention. It’s no defect. Indeed, Banfield calls the chirpy little melody that illustrates the words “this sweet May morning” as “one of most sly pieces of mickey-mousing outside Hollywood”. Finzi’s good humour meant he was no po-faced musical snob. Gilchrist, Hill and the Bournemouth musicians seem to understand Finzi’s quintessential approach, so their bright, vivacious performance is more in keeping with the composer’s vision than their rather staid predecessors. Finzi ends the work with a sparsely orchestrated, exquisitely elegant simplicity, all the more profound for its contrast with what went before. In this final stanza, Gilchrist’s singing is almost surreally beautiful. The way he sings “another race have been, and other palms are won” gives me goosebumps, for so clearly does he evoke "Thoughts that do often lie too deep for tears”.“
at October 12, 2008