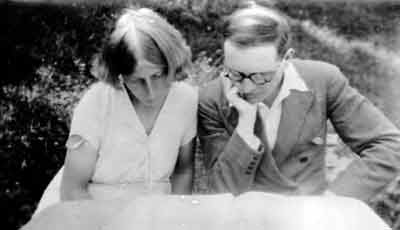 Who was "Mi" as in Poèmes pour Mi ? She was Claire Delbos, a talented violinist active in new music circles in Paris in the 1920's and 30's. Messiaen adored her. They were married in 1932. For her he wrote violin pieces and the immortal song cycle which bears her pet name. On Friday I heard Gweneth Ann Jeffers and Simon Lepper perform it in the ante-chapel at New College, Oxford. It's a beautiful cycle, though not as wild as Harawi. As Messiaen said, if you want to understand his work, study this cycle as it has all the elements of his later work in embryo.

Poèmes pour Mi starts with delicate moonlight tracery in the piano part which introduces L’Action de graces. The first words “Le ciel” suggest the vast panorama of feelings that will follow. The text repeats phrases starting with “Et…” like a chant in church. Then suddenly the song explodes in delirious joy “Et la Verité, et L’Esprit et la Grace avec son heritage de lumiere”. Then Messiaen challenges the singer with repeated Alléluias, with melismas within the word, stretching the syllables. The fourth song, Épouvante, introduces something strange and surreal, which shouldn’t really come as a surprise to those who know their Messiaen. Jeffers sings the tricky sequence of “ha ha ha ha ha” with the savage grace that is echt Messiaen, then suddenly switching a low “ho”. Vowels mean a lot for they curve round the barbaric imagery in this song which refers to things like “une vomissure triangulaire” (a triangular lump of vomit”. It’s almost like scat singing, or something from a primitive (to western ears) culture.

Then, typically Messiaen switches again to the serenely mystical L’Épouse, where Jeffers keeps her voice hovering, barely above the level of a whisper. Lepper’s piano entwines the vocal line, for this is a song about marital union. The balance is carefully judged. More contrasts with the songs Les Deux Guerriers, and Le Collier. The first is like a march, the lovers being “warriors”, in the sense that angels are sometimes depicted as warriors armed in a cosmic struggle between good and evil. Then suddenly domesticity returns, transfigured with tenderness. Jane Manning, ’s great Messiaen champion, wrote of this song, “One can’t help thinking of the mystical properties of crystals and prisms” for the sounds seem to refract in intricate patterns of light. The final song, Prière Exaucée, is demanding, combining guttural sounds like Frappe, tappe, choque with expansive cries, Donnez-moi votre Grace, marital love uniting with the love of God.

Excellent performance as you'd expect from Gweneth Ann Jeffers. easily the best Messiaen singer of her generation. Sadly, Claire Delbos developed some kind of mental illness after the birth of her son and ended up in a psych hospital, where she lived on for 30 years.