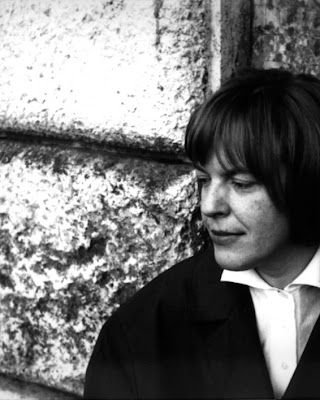 Thomas Larcher's Die Nacht der Velorenen really is an interesting work, which we'll probably hear more of. His publishers are Schott, though this piece isn't available yet. However, his 2002 song cycle for soprano, violin, cello and piano, My illness is the Medicine I need is available. In fact it's being performed at the Wigmore Hall on 24 November with Claire Booth, who's very good indeed – another must-go concert. Böse Zellen, also premiered by the London Sinfonietta this week, will be on at Zankel Hall in May (piano and orchestra).

The texts used are recently published fragments from Ingeborg Bachmann, the poet who fascinated Paul Celan and Hans Werner Henze. These aren't formal poems, but fragments, but it was this very brittleness that attracted the composer, "to transcend their rawness by compositional means". So, not conventional word painting but the opposite. It's as if the music expresses what's beyond the text. The singer listens a lot, the words singing like a commentary on the music. This was written for Matthias Goerne, and it sounds as if it was written "with" him, too, for there's a lot of "listening", dialogue between voice and orchestra, as if they are bouncing ideas off each other. Larcher uses an interesting sub group of piano, double bass and, of all things, an accordion, whose dark timbre reflects the baritone's voice.

The introduction is fairly long - fast, rustling figures shrill but clear, then gently deflating diminuendo that becomes softly pounding ostinato. I thought at the time of a clear stream, like a brook in Schubert churning along, entering a deep, still pool. The "pounding" of piano, accordion and double bass made me think of rocks on riverbeds. So what a surprise to read Larcher's note in the programme later: "Here I was encountering not polished surfaces but instead rough stones, on to which I could hold and claw my way forward." It's certainly not literal, descriptive music, so it's uncanny that such images jumped into my imagination.

The poems blend into the music, and sometimes elide into one another. "Ich habe die Wahrheit gesehen .......verschlungen von einer Riesenschlange die in ihren Bauch sie aufbläht..." the piano beats crazy staccato, the winds swirling, circular figures. The dark centre of the cycle is a simple 6 line poem "Im Lot" It's numb, beyond pain "Du sollst ja nicht weinen". Instead of crying, the sense of tight chested breathing, impassive yet unpeaceful, watching, listening, tense. Suddenly tubular bells from the percussion lifting out of the misery, yet distant, and the "riverbed" ostinato returns – this is literally "rock bottom ".

What';s also striking about this piece is the physicality, the sense of "breathing", up and down cadences like exhalation and inhalation. It gives an eerie sense of presence, like there's someone unseen hidden in the music. So all that listening has a very natural, organic feel, the idea of dialogue again. The final song "So stürben wir um getrennt zu sein" is tantalisingly inconclusive, opening outwards yet again. The clear Schubertian brook, but deceptively so. The poet is trying to sound confident but it's illusion, and she knows it.

An absolutely magnificent performance by Matthias Goerne. Of the three concerts he sang in six days, this was the finest, exceptional, perhaps closest to his heart. Audience ecstatic – a wonderful piece of music, so original and distinctive.
at October 03, 2008