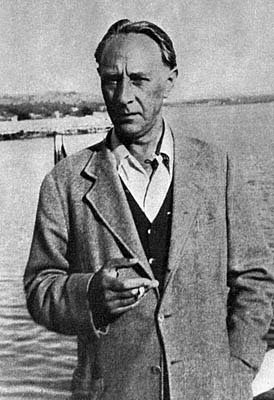 Coming up in 2009 is Bohuslav Martinu's anniversary. In London we're lucky as Martinu is a speciality of the BBC's top man Jiri Belohlávek, so we're in for some idiomatic performances. There's a very good article about Martinu's operas in MusicOMH , so follow the link below. It's worth it as Martinu isn't nearly as well known in this country as he should be.

"The best known of the dozen or so oratorios/cantatas are the quietly moving Field Mass and the strangely hypnotic Epic of Gilgamesh. In recent years, only one of the composer's 14 operas have been performed at a major London house – the last one, The Greek Passion, which was finally presented at Covent Garden in its original form in 2000, and again in 2004. It is 30 years since his early opera Julietta has been performed in the capital, although a concert performance is scheduled (the first of the anniversary tributes?) at the Barbican in March 2009"

"Most of Martinu's work flirts with the strange and off-kilter, delving into the subconscious in one way or another, and Les larmes is an extreme example of this exploration – a woman falls in love with a hanged man, Satan rides a bicycle and heads split apart, while legs and arms dance on their own."

Definitely read this link for more !
http://www.musicomh.com/classical/features/martinu_1008.htm
at October 15, 2008