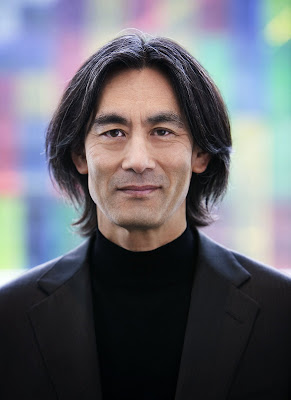 La Transfigur
ation de Notre-
Seigneur Jésus-Christ is one of the key works of Messiaen’s whole output. It describes nothing less than the transfiguration of Jesus into God. It’s a miracle, so miraculous music is quite in order. Kent Nagano worked closely with Messiaen, and is one of his great interpreters. Therefore this concert ought to have been sold out. Unfortunately, La Transfiguration received a very dull performance at the Proms which may have put people off. No comparison between the turgid Prom and this performance. This shone ! A two hour concert without an interval might seem hard to take, but time flashed past with Nagano’s electric, inspired delivery. Seldom has a case been so clearly made for idiomatic interpretation, by musicians who understand what they are doing.

Nagano realizes that, despite the Catholic liturgy, Messiaen’s music is all-embracing, recognizing the value in all cultures. Knowing something about the theology helps on finer points of detail, but essentially, all you really need to know to “get” Messiaen is to share his heterodox vision of the world, where all things rejoice in the glory of life. It’s probably easier for a Kathak drummer or Turkish dervish to understand him than some po-faced fundamentalist. Early Christian saints had much in common with other religions : think of medieval sculpture and painting where saints glow with otherworldy joy. What Nagano brought out in this performance was Messiaen’s uninhibited freedom of spirit. Despite the Latin text and references to the Mass, what made this performance so good was its vibrant liveliness. The idea of man made God “is” exciting whatever flavour your beliefs may be.

Nagano also had the advantage of musicians able to adapt to Messiaen’s unusual idiom. The BBC Symphony Chorus and the Philharmonia Voices showed they could “swing” with the right heady wildness while being so precise that all two hundred voices held together with clarity. Again, this looseness doesn’t come easily to classically trained musicians. That’s why I was so surprised when, again at this year’s Prom, Simon Rattle achieved the feat of making the Berlin Philharmoniker jive. (See reviews in the archive from the list on the right) I dislike his recording of the Turangalîla-symphonie with CBSO, so I really wasn't expecting much. But what he did with the Berliners was in a completely different league. The secret was that the Berliners were playing with the idiosyncratic vitality Messiaen needs above all. That combined with their ability topo play the mosr vivid colours made it wonderful. (Colour is as important in Messiaen as structure). Nagano did much the same with the even larger forces La Transfiguration requires.

La Transfiguration is configured in two Septénaires, two sections each with seven parts. The piece moves forward not through ordinary thematic development but rather as a procession of units marking each stage of the narrative. Thus section 3, Christus Jésus splendour Patris marks a new phase in the progress, opening wide vistas of sound : the choirs seem to explode in glory. “Your lightnings lit up the world, the earth trembled and shook”, they sing in endless variation. No holds barred, this is shock and awe made sound. In the 5th part, Quam dilecta tabernacula tua, Nagano shows how Messiaen writes angular blocks of sound like massed ostinato, yet animated with a strange wavy rhythm. Within this is embedded a glorious cello solo, here played by Karen Stephenson. Her beautiful playing adds another smaller, but vital element to the cross currents of texture. The whole orchestra seems to be swaying together, in perfect unison, for this is a part of the “procession”. Messiaen has two percussion soloists at the front, whose role is much the same as if they were leading a marching band.

The Second Septénaire is even more glorious than the first. The textures here are even more complex, the central core being more dominant, the wavering rhythms now like shards of light radiating outwards into space. After all, God has suddenly appeared in the heavens, announcing that Jesus is his son “in whom I am well pleased”. On the final “ipsum audite” choir and orchestra seem to explode, the darker brass booming like fog horns. Then in the 9th section, Messiaen uses individual solo voices, the embodiment of “man”, before returning to the climactic roar that is God. Exquisitely beautiful committed singing from these voices, heard cleanly and crisply above the tumult.

Nagano also knows the importance of the silences that mark transitions in the form of the music. For example, he respects the silences between the 10th , 11th and 12th sections which mark the differing foci and also the sense of ceremonial procession. At the Proms these silences were interrupted by radio broadcasts, showing how little their function was understood. The 12th section opens with a single phrase “Clothed with light as with a robe” a reference to Jesus appearing to his disciples shining with light. We’ve all seen this in Bible pictures, but rarely made as “real” as in Messiaen’s music. The vocal line becomes highly decorated. Then, Gloria in excelcis Deo, almost hysterical with bliss. Nagano makes the up and down pulse in the orchestra, indicated barely restrained excitement. All nature is singing here, Greek metres and Hindu talas, birds and musicians. The final two sections extend the sense of epiphany, outburst of pure ecstasy and transcendant bliss.

This concert was also a reminder of just how much Messiaen has influenced conducting practice. Music like this cannot afford to be handled without precision and clarity of purpose. Muddy performance dims the light infused detail. Like so many others who worked with Messiaen (Boulez, Myun-whun Chung, Benjamin) Nagano’s conducting persona has been defined by a clear sense of how music works on its own terms. There’s no need for extraneous flashiness. It’s all in the music for those who can find it. Photo of Nagano with suitably colourful background is credit Nicolas Ruel.
at October 22, 2008

Living in the cultural backwater that is Western Canada, I have been (mostly) unable to participate in the Messiaen 2008 festivities, although we did have Aimard through for the Preludes, and the local orchestra gave a fairly unremarkable (and largely unappreciated) reading of Oiseaux Exotiques in May. I also managed a trip to Montreal for the SMCQ's reading of Des Canyons aux Etoiles... -- again, only half sold out -- but I'm sure the performance didn't hold a candle to those in London. I so wanted to fly to London to hear La Transfiguration (my favorite piece), but I couldn't justify $3,000. Your post has me kicking myself that I didn't find a way to get there. I hope they recorded the performance, or better yet, captured it on videotape! I hope you realize just how lucky you are to live where you do!

Alas they didn't ! Which is a real.,oss, becxause most of the people invoilved knew what a significant occasion this memorial was, and were giving the performance of their lives ! There's only one centenary and by the next time one comes they won't be around. So they gave it all they could Aimard's Vingt Regaqrds in February was so intensel76y beautiful no one could breathe....It's nearly all over noe exceopt for 10th Decemeber when Boulez does two actuaol centenary and next day Elliott CArter's birthday. BUt as you say La transfiguration is an experience even with a less than good performance. Nagano searede it into my soul !