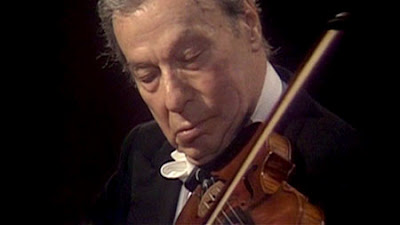 On Nathan Milstein’s death, Harold C. Schonberg of the New York Times wrote: “There can be no argument about Nathan Milstein's exalted place in the hierarchy of 20th-century violinists.” He was “probably the most nearly perfect violinist of his age”. S0 why doesn't he sell millions and make greatest hit albums ? Because he came from that rare breed of musicians for whom artistic merit was everything, far more important than popular success. Chasing publicity was vulgar, corrupting the purity of art. This message is perhaps even more relevant now than when aged 7 he played for Glazunov himself. Later he played with Heifitz and Horowitz, with whom he had a close, lifelong friendship. So how did he come to make one of the finest ever movies about performance ?

For several years, Christopher Nupen had tea with Milstein every Sunday at his home in Chester Square. One day Nupen said that a film of Paganini had been found in a film archive. “Why do you tell me such nonsense!” said Milstein. “Ah, but if the film existed, you’d be the first to want to see and hear what he did!” said Nupen. “It was a great moment of silence in my life. We both drank tea and I knew that he knew what I was up to”. Milstein realized then that film would be a unique way of preserving art for generations to come. “You win”, he smiled, and the documentary was made. He realised that film has a unique way of capturing performance no mere recording can ever match. Milstein wanted to see Paganini's personality, the way he expressed himself while playing. There's lots more to music than mechanical technique.

So in 1986, after 73 years on stage, Milstein made a film, playing the Kreutzer Sonata and the Bach Chaconne. It's being shown on BBCTV 4 on Friday 31st October, one of the absolute "must sees" in this series. It's won prizes all round. It's a beautiful performance, but even more significantly, this film is perhaps the last visual record of a master in the grand Russian tradition. It very nearly didn't get made because on the morning the concert was due to take place Milstein woke with an extreme pain in his arm. But he knew how important the film would be for posterity. So he spent the whole day working out alternative fingerings to ease the burden on that critical first finger. That might seem almost impossible, but Milstein had superlative technique. “He experimented with fingerings all the time”, says Nupen, “because he felt that if you always used the same fingerings, you’d lose spontaneity”. Often he’d play an opening in a certain way and when the recapitulation came, he’d play the same theme in the bar, but with different fingerings. It was a facility that he’d enjoyed polishing over the years until it came instinctively. On the film, he can be seen doing so. He doesn’t spare his painful finger entirely, because it’s important. But as Nupen says “His finger can be seen held up while the second, third and fourth fingers are busily playing away with tremendous virtuosity.” The performance has a vivacity that belies the pain the performer must have undergone.

What Nupen loved about Milstein was his eagerness to keep learning and developing. Film-making is a complex process and there are many technical imperatives that have to be followed. Many artists might not appreciate this, but Milstein immediately understood. “There he was, at the age of 82, knowing hardly anything about television”, says Nupen, “but so willing to learn that he understood immediately what he needed to do to make the film work”. A lovely moment is captured on the film, when Milstein tunes his violin, but before he starts, you see him quietly looking down on the floor to see if he’s on the mark he’d been given to stand on to give the best angles for lighting. He knows the mark is there to make the film more accurate, so he moves into the right position and starts to play. “I find this immensely touching and impressive”, says Nupen. “There is so much temptation for someone in his position to be demanding but Milstein had absolutely no egotistical pretensions. He was willing to learn what was completely alien to him, if it would help the ultimate result”. He was courteous to even the most junior member of the film crew, respecting their art as well as his own. “When you stop learning”, he used to say”, quotes Nupen, “That’s when the trouble starts”.

Next week, the second part of the film will be shown, tracing Milstein's career from his childhood in Russia to America and eventually to London. But for now, watch the film of the performance on BBCTV4 and/or get the DVD from Allegro Films. Highly recommended !
at October 28, 2008