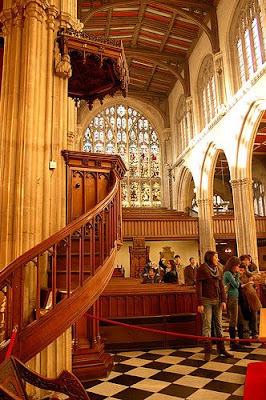 Why I like the Oxford Lieder Festival so much ! Only one hour from London! Sir Thomas Allen is Patron of the Oxford Lieder Festival. He has dedicated his life to the art of song, and takes his responsibilities as Patron very seriously. This was more than a good performance, it was a memorable experience. Sir Thomas is one of the foremost baritones in this country, enjoying all the accolades of success. Yet he’s altruistic, caring enough about his art to support singers who may one day follow in his footsteps. He could fill concert halls many times the size of this Oxford church, but he understands why the Oxford Lieder Festival is important. It’s of national significance as it’s the most comprehensive art song programmes in the country. In the last seven years, it’s brought together high profile artists and younger talent: many owe their careers in part to the fellowship of Oxford Lieder, and to the pursuit of excellence in art song.

This evening focussed on French chanson. Henri Duparc’s songs are intensely perfumed intoxication. As Richard Stokes says in his excellent programme notes, in L’Invitation du voyage Baudelaire’s middle stanza was omitted from the song, as it was “clearly too domestic for Duparc’s visionary setting”. These songs are often the preserve of opulent sopranos, but Allen’s agile technique lets his voice soar flexibly, floating the higher parts of the register with unforced ease. Voices are like bodies, use them well and they don’t let you down. Similarly, Allen sang Fauré’s L’horizon chimérique with the vigorous free spirit these songs require. To quote Richard Stokes again, citing their great exponent Charles Panzéra, “these are not melodies for a soft grained voice” Like Panzéra, Allen gets just the right, discreet rallentando on the last line “”Car j’ai de grandes départs inassouvies en moi” (For within me are vast, unappeased departures). Just enough decoration to tantalize the listener, to hint at adventures yet unknown.

Allen displayed more Gallic brio in Ravel's Don Quichotte à Dulcinée and Histoires naturelles. Each of the songs in both sets are highly distinctive miniatures, The three songs of Don Quichotte are genre pieces with Spanish flavour – they would have worked vividly as episodes in film. The animal portraits of Histoires naturelles are even more closely observed, each song portraying the characteristics of the creatures they describe. Le Grillon (the cricket) hops and darts with nervous energy. Le cygne (the swan) glides with grace. Yet there’s a pungency about these pieces that lifts them above the merely pictorial. Ravel doesn’t set them as purely conventional parlour pieces, he often leaves out mute “e’s” in the text, which until then had been carefully observed. Audiences in 1907 were shocked because the songs sounded rough and unfinished. Ravel did this to give them greater immediacy. These are lively animals, not museum specimens, and the music is natural and direct. A perfect choice for Allen’s witty delivery.

As further proof of his dedication to the ideals of Oxford Lieder, Sir Thomas chose to share his concert with two young singers who deserve “Fifteen minutes of fame”. Catherine Hopper and John Reid may be young, but this high profile exposure is good for them. Performers need the experience of live recital, because song is very much an interactive genre : the better the audience, the better the experience. This new part of the Festival is a good idea. Hopper’s Debussy Chansons de Bilitis was particularly impressive : hers is a voice that can fill a hall with ease, even when she has to compete, as she did here, with the rumbling of buses and pantechnicons on the High Street outside. Nice range of colour, too. Hopper should be worth listening out for again.

There were more Oxford Lieder protégés in the audience at this concert. The Festival’s masterclass workshops start this weekend. These masterclasses are just famous, because they are extremely high quality. Tutors include Sarah Walker, an excellent teacher and personality, Richard Stokes and Eugene Asti. The depth of focus is essential, because there is more to art song than singing notes attractively – good performance springs from much deeper sources. Oxford Lieder masterclasses emphasize collegiality and goodwill: people are there to listen and learn, not compete against each other. Oxford Lieder builds participants’ resources so they can appreciate whatever is valuable around them. There’s plenty of nastiness later on the career path : masterclass participants focus on love for the art itself. Before the concert, masterclass participants were treated to a dinner at the Corner Club, Oxford’s elegant private members club, to which Friends of Oxford Lieder are given membership. The Corner Club is a haven now that Oxford’s becoming so commercial and hectic. Even colleges are more impersonal than they once were, unless you’re still 18. The restaurant is excellent, convenient to the concert venues and infinitely more civilised than a pub. Membership is definitely one of the advantages of supporting Oxford Lieder. Masterclasses take place this week, with a concert on Wednesday 22nd October, open to the public. I’ve been supporting Oxford Lieder for seven years now. Perhaps you can see why! Few Festivals take place is such beautiful surroundings, and few are of such quality.