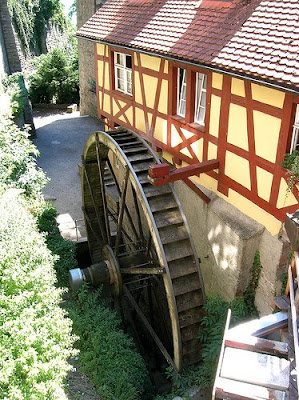 Twenty-five years ago I heard Die Schöne Müllerin in a country church beside the Thames in . “How lovely”, said the vicar, noting that the village is famous for its old mill. Had he known the cycle he might not have been so thrilled! Beneath the sunlit rippling of the brook in Schubert’s music lies menace indeed.
In an excellent pre performance talk, James Gilchrist made the point of contrasting the brightness of the music with the darkness of its content. All around the young miller, nature blossoms, but he’s totally indifferent. He lives in a vacuum, disconnected from reality. The world hums steadily along but he’s hyperactive, swinging from one extreme to another. He hears voices, becomes violent and finally throws himself into the millpond. It’s not pretty. Nowadays, he’d be heavily medicated and thrown into the community without support, harming others as well as himself.
The vernal landscape deceives, as it’s meant to. Hence exquisite performances like Fritz Wunderlich, where you’re taken in by the sheer beauty of the voice. That’s why Matthias Goerne’s version a few years back was so shocking. “There’s nothing cute about teenage suicide”, he said, producing a version so psychologically penetrating that it’s frightening to listen to, even though it’s groundbreaking and a superlative performance. Ian Bostridge, in his more recent work with Mitsuko Uchida, takes another path, connecting the spirit of the brook to the earth spirits and folk magic so dear to the Romantic imagination. James Gilchrist has found yet another distinctive approach, which is quite an achievement in a cycle as frequently performed as this.
I made a special effort to hear this concert as I thought it would be well suited to Gilchrist’s style and I was right. Firstly, his clear, lucid singing works extremely well for it’s direct and naturalistic : songs like this need an understated, almost conversational style for what we are hearing are highly personal “unspoken thoughts”. Secondly, Gilchrist doesn’t declaim, he convinces by genuinely communicating the inner world of his protagonist. Like a true method actor, his characterization comes from understanding how the young man thinks, alien as it may be to “normal” people, so the performance grows from this. Thirdly, he understands how the poetry and music work as external commentary, following the miller’s descent towards death. There’s a journey here, just as there is in Winterreise.
Gilchrist’s young miller is most certainly delusional, a very sick loner unable to form even the most basic of relationships. As he approaches the mill, he’s almost manic with expectation, the voice taking on a shrill excitement. Peter Schreier’s miller had a similar unnerving intensity. This is observant, for the miller’s mind is lit up with an unnaturally bright light : he sees things in extremes. Phrases repeat, like double takes, as if the miller is contemplating his own vision. The rhythms of the millwheel and brook are resolute, Anna Tilbrook’s playing captures the relentless flow. The miller’s fundamental weakness is thrown into contrast : he doesn’t think he’s as strong as the apprentices : Ungeduld is a list of the things he’d like to do, but can’t.
In some interpretations, Mein! is a moment of hope. But Gilchrist appreciates how it connects to the previous song, Tränenregen, where the miller at last gets to spend time with the girl. Instead of talking to her, he talks to the brook ! No wonder she makes her excuses and leaves. To anyone else, that would be rejection, but suddenly the miller thinks he’s won the girl. Gilchrist’s Mein! is heartbreaking, because the ecstasy is so clearly delusional. The miller “feels” intensely, therefore assumes everyone else feels as he does, without compromise. As Gilchrist shows, this joyous song is the beginning of the end. The miller’s jealousy and anger seem quite healthy in comparison. Just as the brook misleads deceptively, Schubert builds in deceptively happy music at the grimmest movements.
Gilchrist and Tilbrook use silence to create space the two final songs, for they are the threshold from which there is no return. When the miller stops being hyperactively manic, he becomes numb, unable to resist the brook’s lethal powers. This is also tn opportunity for Gilchrist to comment as an observer. All along, he’s acknowledged the miller’s mania accurately, but with sympathy rather than judgement : the poor lad is no grotesque. Gilchrist doesn’t look “at” him, but “with” him. In the end, though, he can’t go where the miller goes. These two songs are trickier than they seem, for the singer has to express sympathy yet detachment. Tenderness is important for the miller has suffered so much. Yet listen to what the brook is saying : It blames the huntsman, it blames the girl, the böses Mägdelein, who still has the power to wake the drowned boy ! Give into the brooks seductive lies and enter into the madness. Gilchrist sings gently, but he knows this is no lullaby, it’s dangerous.
This was one of the key concerts in this year’s Oxford Lieder Festival, and for good reason. Oxford Lieder is dedicated to extending the art of Lieder, making people think how and why it’s such a special art form. Gilchrist demonstrates exactly the sort of intelligence and sensitivity that makes good Lieder singing. This was a masterclass in itself.
See the review and the lovely pic :
http://www.musicweb-international.com/SandH/2008/Jul-Dec08/olf1210.htm
Please note, James Gilchrist has recorded this on Orchid, to be issued late September 2009